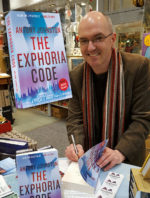 Going Against the Grain by Antony Johnston

It’s time to admit that I enjoy going against the grain.

Until now I’ve been best known as a graphic novelist, and I’ve had my share of success; a couple of New York Times bestsellers, some critical acclaim, and earlier this year my graphic novel The Coldest City was adapted to film as the Charlize Theron-starring Atomic Blonde.

But, importantly, this success was achieved while regularly defying received industry wisdom. So when I recently turned to mainstream fiction for my new spy thriller, The Exphoria Code… well, I couldn’t help going my own way again.

My time in comics has seen the industry go through enormous peaks and valleys of prosperity and deprivation. It’s slowly – oh, so slowly – moving away from disposable monthly pulps to something more closely resembling the mainstream fiction market, and there’s a renewed focus on sales through bookstores. At the same time we’ve seen encouraging success with, and growing interest in, graphic novels that look outside the superhero market to more traditional genres; everything from literary autobio to high fantasy, from sci-fi to crime, from thriller to espionage.

But the vast majority of the market and its attention remains firmly focused on the safe, predictable monthly grind of ‘capes and punching’ serials. And while the success of blockbuster movies from Marvel and DC has been a boon for parts of the industry, it only further increases the perception that comics=superheroes.

That’s frustrating for someone like me, who likes to write spy thrillers and murder mysteries, and prefers to publish in the Original Graphic Novel format rather than monthly serialisation.

Most of the titles you see labelled ‘graphic novels’ are actually collections of serialised comics. By contrast, OGNs are the closest thing we have to mainstream fiction novels; stories published as a single, complete work without serialisation. And I’ve written more OGNs than anyone else in the Anglophone market.

So I’m quite used to going against the grain. It hasn’t made my comics career easy by any means (though, to paraphrase Roosevelt, nothing worth doing ever is) but, ironically, most of the success I’ve enjoyed has come from me saying “To hell with the market” and writing a story I believed in, regardless of its alleged commercial appeal… like when I decided to write a sober Cold War spy thriller and release it in black-and-white as an original hardback. Unsurprisingly, the traditional comics market wasn’t overly receptive at first — but that book was The Coldest City, and the rest is history.

All of which may explain why The Exphoria Code has a certain defiant air about it.

Right out of the gate, it’s a spy thriller where the main character, Brigitte Sharp, is not a grizzled, hard-drinking old boy, but a young, vegetarian woman. Bridge is a computer hacker, working within the specialist Cyber Threat Analytics unit at MI6. Her leisure interests revolve around 1980s counterculture, goth music, and online chatrooms. Meanwhile, the spy plot hinges on strange Internet posts, encrypted messages, cyber-espionage, and military drones.

These are all things that, according to received wisdom (and more than a few submissions editors), crime and thriller readers Do Not Want. Things at which you, the people reading this, will supposedly turn up your noses and say, “No thanks, I’ll stick to my middle-aged, middle-class detective solving cosy murders, if it’s all the same to you.”

I say, to hell with received wisdom.

Make no mistake, I wrote The Exphoria Code for me. Like much of my work, it’s a type of story that I myself wanted to read, but nobody else seemed to be writing. So I did.

But I’m also betting that crime and thriller readers are smarter, and more open-minded, than the received wisdom gives them credit for; that what really matters to people is a good story, with relatable, interesting characters; and that a spy thriller set in today’s world, with its Google and Facebook and Skype and iPhones and selfies, must reflect that same world or be doomed to irrelevance. Does anyone really think spies in 2017 don’t know their way around a laptop?

Maybe they do. Maybe I’ve got this all wrong. But I really enjoy going against the grain.

The Exphoria Code is published by Lightning Books.