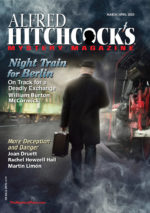 I’ve always had a love of European thrillers set during or just before World War II. I read The Guns of Navarone and its sequel Force Ten from Navarone when I was eleven years old, absorbing every word. Those novels became templates for my embryonic writing as a preteen, and though my literary palette has expanded considerably, they still hold sway over me today. I may stray into other genres and styles, but when I get too far off the path, I always return to MacLean’s lean, muscular prose and his tales of determined men facing great dangers and making impossible choices.

My cover story in the March/April edition of Alfred Hitchcock’s Mystery Magazine is “Night Train for Berlin,” a thriller set on a train bound for Berlin on the eve of the Second World War. In style it owes much to MacLean, as well as Alan Furst, Eric Ambler, Graham Greene and the late, great Philip Kerr. That said, we’re not going to talk much about MacLean or those other phenomenal writers today. Their influence is obvious to anyone perusing my story. Instead, I will illustrate three suspense techniques within the story made for different purposes and effect. To make my points universal (and not spoil “Night Train” for those who haven’t read it) I will cite examples from very well-known sources that have nothing to do with Alistair MacLean or the Second World War: the novel Jaws, and the film adaptions of From Russia with Love and Psycho.

So, kick back with a cup of joe, and safely self-isolate as I warble on about suspense.

Look at the technique used in Peter Benchley’s’ Jaws, one of the most suspenseful books ever written.  Benchley, in a short initial passage, depicts a shark swimming.  The shark is large and hungry. Little more is revealed.  The scene is third person omniscient point of view. Only the reader knows of the shark. At this point there are no other characters.  Then a break. Not a chapter break, but a scene break. Has any time passed? Are we at a different location? We are not told. The new passage shows swimmers playing in the beach’s water. They are having a good time, like you or I might on any seashore.  It triggers our collective memories. We’ve all done this.

Is that shark from the previous passage stalking these people? Is it about to attack? Is it even here? Unlike the swimming characters, the readers know a hungry predator exists somewhere, that a threat could be present.  But unlike Benchley, playing us like a violin, we don’t know the outcome. We squirm waiting for something to happen. Some chapters it does, sometimes it doesn’t, so each scene brings new doubts.  Uncertainty is the key. If Benchley had told us the shark was right under someone’s foot, mouth agape, there would be momentary excitement on the page. Potential violence. Gore. But it would also end the tension.

But this is worse. Much worse. Uncertainty extends the anxiety. We fear the shark is here, about to bite. Yet, we don’t know, and we are absolutely helpless to warn the swimmers.

Get out. Get out of the water, you say to them as you turn the page. But they can’t hear you. Not in time.

In “Night Train for Berlin”, our main character is Eduard Möller, a German-born communist being taken from his home in the Soviet Union back to Berlin to face execution by the Nazis for treason.  He is supposed to be exchanged for another prisoner, an exiled Russian aristocrat named Polzin that the NKVD (the forerunners of the KGB and creators of the Gulag) want to get their hands on.  But Polzin has disappeared, killing his Gestapo guard and hiding himself among the passengers on the train. The Gestapo and the NKVD, in an uncomfortable alliance, search the train for Polzin, dragging poor Möller along as they investigate.

The key to suspense early in this story is uncertainty. Consider the number of questions posed at the outset, each generating a degree of tension:

read Jaws to find out where that shark is) but for now, moving on…

Paradoxically, knowing exactly where the threat is can also generate tremendous suspense.  The film From Russia With Love features the most suspenseful extended sequence in any Bond picture. For one of the few times in the Bond franchise, we the audience, are wise to a threat Bond isn’t.  That threat is assassin Red Grant (Robert Shaw), who has boarded the Orient Express to kill Bond (Sean Connery) and steal a decoding device in his possession.  Grant murders Bond’s MI6 contact, Captain Nash, and takes Nash’s place. Bond, thinking Grant is Nash, makes plans with the assassin, dines with him, then – oh, oh – takes him into his cabin. A killer we’ve seen dispatching people for the first hour of the movie is right before us, about to strike. Unlike the shark in Jaws, there is no uncertainty, we see him creeping up to his target.  Powerless to warn James, we watch for clues Bond has caught onto Grant. Yet, we are constantly thwarted. Even when James catches Grant drugging Bond’s Russian lady friend, the assassin has a viable excuse. The tension builds until it ends in one of the greatest fights on a train ever filmed. But the 27 minutes of perfectly executed suspense before the fight are even better. The combat is the release.

Without going into detail, I will say in “Night Train,” Möller identifies Polzin before the NKVD or Gestapo does.  Moved by their mutual humanity, rather than political differences, Möller decides not to reveal Polzin to his hunters. Möller also deduces whether or not Polzin has accomplices. With those strands of tension released, a newer stronger one emerges. Möller now has effectively become a surrogate for the reader, aware of Polzin’s predicament, able to describe it for us, but because of his own situation unable to intervene. Like the audience watching Red Grant move in on Bond, Möller is powerless to do anything as the NKVD and the Gestapo, by their own terrible methods, get closer to getting their man.

Suspense can be a useful tool for generating empathy with characters we might normally dislike or even feel repugnance towards.  In Psycho, Hitchcock uses this technique with the character of Norman Bates (Anthony Perkins) directly after the infamous shower scene. Up to this point in the film, Marion Crane (Janet Leigh) has been our protagonist. But poor Marion (spoilers if you’ve been self-isolating in a room since 1960) has just been butchered by Norman’s “Mother.”  After the killing, we see dutiful son Norman clean up the crime scene for his maniac ma and place Marion’s body in the trunk of her car. He pushes the car into a bog behind the Bates Motel.  Then a suspenseful (and amazing) thing happens. Halfway into sinking under the bog water, the car stops submerging, the white roof and hood still clearly visible in the night.  And to our shock, we, the audience, are nervous about this.  The car’s refusal to sink creates an unexpected tension. Will the murder be discovered? Will Norman be caught? What will Norman do now if the Ford refuses to submerge?  Then, we feel palpable relief when the car suddenly starts to sink again, and after discharging a few air bubbles, drops below the water out of sight.  Hitchcock has done something brilliant here.  He’s managed to switch protagonists (no easy feat) and our emotions have gone along with it.  We may intellectually want Norman and Mother to get caught, but emotionally and narratively we are now involved in “their” plight and coverup.  We are attached to a character we never thought we would be by this deft act of suspense. And Hitchcock cements this emotional involvement throughout the rest of the second act as people coming looking for Marion: first a detective, and then her sister and boyfriend. Norman lies to them all, and we are in on his lies, gripped by the tension, picking up on every mistake, wondering, as Norman does, if the newcomers noticed his flubs, and if these intruders will bother his mad old mother in the Gothic house on the hill. Norman is now our central character. After that sinking car, we are emotionally locked into the plight of a man we believe (at this point) to be an accomplice to our original protagonist’s murder.

And it sets up the shocking revelations of the third act brilliantly.

In my story, I use suspense to make the characters of Möller and Polzin more sympathetic. It was always going to be difficult to have my audience emotionally engage with both of them. Depending on readers’ knowledge of history and where they rest in the political spectrum, they may find either a communist or an aristocrat a very unattractive character.  To address this, I use suspense, as Hitchcock did, to create an emotional connection. Both Möller and Polzin are placed in jeopardy and fighting brutal regimes for survival. This by its nature is humanizing and sympathetic and builds reader empathy.  It doesn’t hurt that their opponents are the pitiless NKVD and the insidious Gestapo, but that alone wouldn’t be quite enough. Möller’s decision to not reveal the identity of Polzin, his political opposite, is redemptive (if redemption is even necessary) and it completes a modest character arc. At the denouncement, that decision is repaid. Indeed, I feel it gives a nice moral underpinning to the tale. At least, I hope it does.

If you wish to read “Night Train for Berlin” and the other stories in the March/April issue of Alfred Hitchcock’s Mystery Magazine you can read find it online here.

BIO: A five-time Derringer finalist, William Burton McCormick’s fiction has appeared in Black Mask, Ellery Queen’s Mystery Magazine, Sherlock Holmes Mystery Magazine, The Saturday Evening Post, Alfred Hitchcock’s Mystery Magazine, The CWA Anthology of Short Stories: Mystery Tour and elsewhere.  A native of the USA, William received his MA in Novel Writing from The University of Manchester and was elected a Hawthornden Writing Fellow in Scotland in 2013. His historical novel of the Baltics, Lenin’s Harem, was published in both English and Latvian, and became the first work of fiction ever added to the Latvian War Museum’s permanent library. A world traveler, William has lived in seven countries including Latvia, Russia, Ukraine and Estonia for writing purposes.