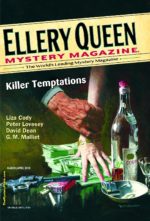 Flash fiction is not a genre that often allows room for substantial flashbacks, backstory or large degrees of introspection.  When writers do include these elements, they must be used with a frugality that implies much about the characters and situations while actually taking up very little printed space. Even in the modern digital marketplace where the physical space is no limitation, the flash fiction artform by its very nature puts a premium on brevity.

Ellery Queen Mystery Magazine, the world’s leader in publishing short crime fiction since its foundation in 1941, is no stranger to creative ways of adding depth to their tales of mystery, criminal misconduct and fiendishly-entertaining wrongdoings.  Its pages regularly feature some of the most innovative crime fiction ever printed.  The current March/April issue contains ‘Cleopatran Cocktails’ by William Burton McCormick, a story that through its use of narrative flashbacks in the form of world records (coupled with some unusual formatting) covers 2000 years in a little over 900 words.

While the central plot thread of ‘Cleopatran Cocktails’ is still a modern setting, the inspiration for this story lies in the author’s study of the ancient world at America’s Brown University in the ’90s (which also seems a little like ancient times in 2018). To reveal more would be to spoil the surprise. But the past hangs over the story’s protagonist as she commits a most unusual crime. The essential mystery is what that crime exactly is and why she’s doing it. Those of you with a classical studies background may see it coming; hopefully other readers won’t.

Ellery Queen Mystery Magazine’s esteemed editor, Janet Hutchings, has been kind enough to post the complete story on their website until August 2018 as an example of the quality within their magazine. CRA subscribers may read it for free here: