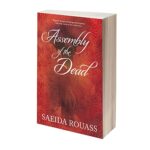 In 2015 I came across a Times newspaper article that detailed the crimes of the ‘Moorish Jack the Ripper’. The article was printed in 1906 and offered a gruesome description of a series of murders of women that had taken place over that year in the walled city of Marrakesh, Morocco.

Having grown up in east London, it is hard to escape the legend of Jack the Ripper. The alleyways he stalked are the same ones I walked. What’s more, I am of Moroccan heritage; my parents settled in east London in the 1960s. It’s no surprise the ‘Moorish Jack the Ripper’, Moors being a term used by Europe historically to describe Moroccans and Muslims from southern Spain, captured my imagination. I found myself hunting for other reporting of the case on the Internet, at the British Library and at the American Legation in Tangier. Once I emerged from the rabbit hole of archival research, I knew I had a historical crime novel on my hands and packed up my worldly belongings to move to Marrakesh.

Impress Books published my novel, Assembly of the Dead, in 2017. The novel tells the story of a fictional detective, Farook al-Alami, as he hunts the ‘Moorish Jack the Ripper’ through the serpentine alleyways of Marrakesh. But it also tells the story of Morocco in 1906, caught in the chaos of the Algeciras Conference, which took place in April of that year and saw Europe agree a blueprint for the colonisation of Morocco by France and Spain.

Writing a crime novel set in an historical context has so many elements. Almost every detail needs verification and the questions about how and what people did in that place and time feel never-ending. There are infinite archives, newspaper reports, historical toms and memoirs to work through. Yet, as I dug for detail it was the absence of the lived experiences of women within those resources that proved the most challenging. With the exception of Moroccan women being seen through the eyes of European travellers or particular women presented in Moroccan history as special for their unique contributions to the country, it seems the actual lived experience of most women were never recorded. Their lives were not worthy of entering the historical record. When it came to the victims of the ‘Moorish Jack the Ripper’, the lack of information was even direr. In fact, I found nothing about them except the total number he killed.

It is not surprising. The legend of Jack the Ripper, the telling and retelling of his story has historically objectified and devalued his victims. They were sex-workers used as plot twists, the violence inflicted on them adding sensationalist detail. Their actual lives were rarely treated as significant, except the bits that made them a target for Jack the Ripper. While The Five by Hallie Rubenhold has gone some way to correct this, the backlash she has received from Ripperologists has been significant. Crime writing, whether fiction or true crime, is undergoing a reckoning of sorts. Some, would argue, it is long overdue. Its fixation with men who commit violence on women has overshadowed those women and the impacts of the violence.

When writing Assembly of the Dead, I knew I was being presented with an opportunity to do it differently. The ‘Moorish Jack the Ripper,’ has not entered Moroccan or serial killer legend. In fact, it has mostly been forgotten, the story never written. I felt, perhaps my novel was an opportunity for fiction to do what history refused to. Writing the novel meant imagining the lives of the women ‘the Moorish Jack the Ripper’ chose as his victims and making sure their hopes, dreams, struggles and pains at the very least made it into our collective imagination.