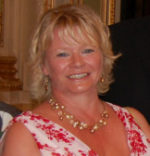 Karen is author of The Detective Lavender Mysteries.

I first came across Stephen Lavender, a Principal Officer with the Bow Street Police Office while researching one of Northumberland’s biggest robberies.  In 1809, £1,057 of rent money was stolen from Kirkley Hall in Ponteland. Lavender was called up from London by Kirkley Hall’s owner, Nathaniel Ogle, to solve the devilish crime. Lavender’s main suspect was our own ancestor, Jamie Charlton, who was eventually convicted and transported. Stephen Lavender put our relative in the dock and had him shipped off to Botany Bay – but I’ve never held that against him.

Instead I became fascinated by Lavender and his colleagues. Nicknamed The Bow Street Runners, this first British police force was created in 1747 by the novelist and magistrate, Sir Henry Fielding. Their role was to tackle the increasing crime and disorder in the capital, where every fourth shop was a ‘gin house,’ a vast sex trade sprawled across hundreds of brothels, and gangs of highwaymen and cut-throats terrorised the roads on the outskirts of London.  Fielding brought together eight reliable constables, who soon gained a reputation for honesty and efficiency in their pursuit of criminals. He also formed a horse patrol to police the outlying roads. The officers were predominantly big, burly fellows, whose main job was to serve warrants on suspects and haul them to the cells at Bow Street or Newgate gaol.

But sixty years later, by the early 19th century, the job had changed. The Principal Officers were now Britain’s earliest private detectives. Bow Street hired them out to wealthy, private landowners (like Nathaniel Ogle up at Kirkley Hall) and to other magistrates in the provinces when they needed help solving difficult cases. Famous throughout London, they were the only policemen allowed into Buckingham House (the forerunner of the palace) and did security work for both the Royal Family and the Bank of England.

The more I read about them, the more fascinated I became. And there was plenty to read — especially about Stephen Lavender. The Times newspaper, in particular, was a huge fan of Lavender; it frequently reported his successful cases in glowing terms. On one occasion, they even had to print a retraction because their journalist got carried away reporting how Lavender had chased ‘the fugitive Watson’ down the Thames in a boat.  (The river chase never happened, apparently.)

I had to make some difficult decisions once I decided to use this real-life private detective as my protagonist and set my cosy fiction in the Regency period. For a start, there was the tricky question of whether or not to give him a partner. When the principal officers went to work on cases outside London, they usually worked alone.  But literary convention in crime fiction requires that the detective has an assistant; it’s what readers expect. In the end, I decided to veer away from historical fact and I invented Ned Woods. I thoroughly enjoyed creating the rapport and humorous dialogue which erupts spontaneously between him and Lavender. My readers like him too; many reviewers admit that Constable Woods is their favourite character.

Then there is the repetitive issue of names. Back in the Regency periods, parents were traditional rather than imaginative and two-thirds of British men were called John, James, William and Thomas. Every time I tried to use a real-life case investigated by Stephen Lavender, I had to change the first name of nearly everyone involved to avoid confusion. I also had a problem Lavender’s title: Principal Officer. I didn’t think that a series called The Officer Lavender Mysteries would work; it was too Americanised. It reminded me of Officer Dibble in the children’s TV show, Top Cat. So I changed history and gave Lavender a title that reflected the job I knew he was doing; Detective.

Another problem I frequently encountered was the lack of information about their early policing methods, although this gave my imagination free rein to invent it. There are a few memoirs left, written by retired Bow Street officers, but official records don’t exist anymore. The contemporary newspapers became my greatest source of information about their cases but —my goodness! — they are a gruesome and gory read.  I think we tend to romanticise the past and forget that this was an era when a trip to a public hanging was a fun family day out. The theatres were also a popular pastime and were full of burlettas and melodramas where the hero or heroine — and sometimes both — frequently meet a grisly death on stage.  As a writer of cosy crime, I have to think carefully about which salacious details I can include in my novels and which to omit; my readers don’t like too much graphic description.

My third novel The Sculthorpe Murder was a challenge to write because of both the reasons above. The Times and the other news-sheets extensively reported the story of the vicious robbery and assault of an eighty-six-year-old man, William Sculthorpe, in Northamptonshire. But none of them explained how Lavender actually solved the crime and earned his ‘handsome reward’. They preferred to dwell on the horror poor William Sculthorpe experienced when the men with their ‘blackened faces’ burst into his house and the bloodthirsty details of the attack. The Times gave a particularly nasty description of ‘the large quantity of clotted blood’ which had settled in the old man’s mouth.

Another issue that frequently vexes me is what to do with the blooming horses while my officers are interviewing suspects. Modern crime writers have it easy. When their detectives investigate a case, they park their cars and they’re always there when they return. Not so horses. Like small children they wander off unless you remember to tie them up properly. In my latest novel Plague Pits & River Bones one of the characters rides to Hyde Park and is murdered. The villains move his body.  It was several chapters later before Lavender and I both realised that we’d forgotten about the victim’s horse. Cue a frantic rewrite where Lavender goes back to Hyde Park to look for the missing animal.

But despite the problems I’ve encountered, I love writing my novels and enjoy bringing this almost-forgotten part of British policing history to life. Yes, I’ve changed some aspects of history but hopefully there’s still enough authentic detail and Regency slang in my books to transform my readers back in time and let them see, hear and smell the seedy, criminal underbelly of Britain in the early nineteenth century.

Read about Karen and her novels on her CRA author profile.