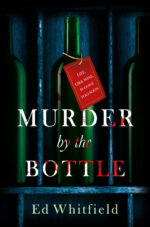 True Crime? How we bottle up and serve real-world acts of depravity, by Ed Whitfield

The British fascination with murder has a long and illustrious literary history. From Thomas De Quincey’s 1827 essay, On Murder Considered as one of the Fine Arts to Kate Summerscale’s The Wicked Boy, we continue to be intrigued by crimes of great notoriety and the ghouls that perpetrate them.

My debut novel, Murder by the Bottle, picks the scab of our fascination with true crime, imagining an escalating episode of madness and murder that guts a peaceful Cornish seaside town.

Is the manuscript sent to the town’s favourite son an authentic account of a deluded killer, or a cruel hoax designed to prod the public’s insatiable interest in the very worst of human nature? The novel is a piece of meta-fiction that invites readers to reflect on the ways criminality is packaged and consumed. We live in a highly fictionalised world – crime, particularly unusual or violent crime, takes on a life of its own in various media – biography, newspapers, movies, and documentaries.

Netflix’s recent four-part documentary, The Ripper, focusing on the hunt for Peter Sutcliffe, was a selective history. The filmmakers chose what to emphasize and what to omit; they handpicked their witnesses – adopted an approach built around personal history and social impact. Sutcliffe is a structuring absence in the series; the monster you don’t see until the end. His flawed humanity is deemed an affront to his victims, so it is excised. In act of dramaturgical vengeance, he is unpersoned, just as he unpersoned his victims.

One can understand this approach. It’s safe. It uncouples our prurience from the people who inspired it. We note the temptation to act like a sympathetic mourner at a wake when marking the opprobrium heaped on those who made a bolder inquiry. The makers of the short film dramatizing the interviews of James Bulger killers, Detainment, were vilified by the victim’s mother for humanizing the murderers, dramatizing them in the moment of their arrest, without import from the present. Their human status is surely not a point of contention but acknowledging it was. True crime isn’t true.

The prevailing trend is now to focus on the victims of crime – just as Hallie Rubenhold did in her enlightening biography of Jack the Ripper’s canonical victims, The Five. This is deemed a corrective, following decades of prurient interest in the characters that commit heinous acts. However, the tension in these accounts is that the victims, while having their humanity affirmed, are only subjects of interest because of their association with the person who killed them. To tell their story is an act of posthumous reassurance – the threat to the society they once were part of, reduced to a footnote – an aberration.

For me, people who can’t be contained by societal norms and how they rationalize such criminality will always hold greater fascination than their victims. I accept this is not a fashionable view. More interesting still is our collective tendency to tell stories informed by, and in reaction to, acts of grotesquery.

Murder by the Bottle invites readers to think about the storyteller’s propensity to distort and overlay an event with their own agenda and interests, literalizing the process in-narrative. One can choose to see Keir Rothwell, antagonist – narcissist, damaged documentarian – as an unreliable narrator, but equally he is the key witness to events. The novel explores the tension that arises when a character we don’t like tells us something we don’t want to hear about behaviour we dare not contemplate.

The aforementioned Yorkshire Ripper case is alluded to, with the suggestion that the narrative may be a hoax; an attempt by an imaginative writer to hijack events. Great slights against society breed both fascination but also a culture of exploitation. Murder by the Bottle is a mediation on this – a satirical swipe at True Crime literature – that simultaneously explores how popular depictions of criminality may inform the consciousness of those who commit crime. The novel’s memoirist includes, consciously or not, allusions to shows that have shaped their criminal imagination – shows like Columbo. Theirs is a mind overlaid by TV, movies, and a knowledge of grisly real-world cases (Rothwell refers to the Moors Murderer Myra Hindley, for example, when characterizing a figure from his past). Keir Rothwell is a criminal steeped in representations of crime.

True Crime, and the industry around it has never been more popular; it’s ubiquitous in print, in podcasts, on streaming services. Consequently, Murder by the Bottle is a timely examination of the genre as a cultural phenomenon and the forces that shape it. It’s also a challenge to Hannah Arendt’s contention that evil is inherently banal – a reductive notion, designed to dehumanize the perpetrators of crime, and delimit the social forces that conditioned their offending behaviour. This is a well-intentioned attempt to “cancel” killers (you might think they’re earned their annihilation), particularly those of women, because they represent regressive, misogynist forces. But this is like trying to understand disease without investigating transmission. Why matters – as do our reactions and sympathies after the fact.

In Murder by the Bottle I attempted a novel that moots the terrible possibility that bad people may not be so different from ourselves but also, and worse, as Keir suggests in the opening pages, may be created by people like ourselves; the same people who will later dismiss them as base and incomprehensible. If the structuring assumptions that inform True Crime are unsound, then the genre is debased. It’s ironic, you may think, that the best vehicle for exploring this remains the novel – the great lie that tells the truth.

Read more about author Ed Whitfield and his debut novel Murder by the Bottle here.