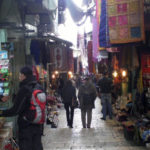 Laurence O’Bryan is the author of thrillers The Istanbul Puzzle and the second novel in the series, The Jerusalem Puzzle. Here he tells us about his visit to the city to research the novel.

In Jerusalem you can go to hell or heaven in streets just wide enough for two handcarts to pass. Hell is the Valley of Gahenna, the rocky valley just to the south of the city walls, where the entrance to the underworld was traditionally placed. Heaven is the Temple Mount, the Wailing Wall or the Tomb of Jesus, depending on your religion.

‘They won’t shoot you,’ the pretty Israeli girl on the bus from Ben Gurion Airport had said. I’d just explained that I was staying for a week in East Jerusalem. It was late February 2012. The sky was blue and the bus was winding up through the hills. I was the last to be left off. The narrow car-choked streets of East Jerusalem were busy with electrical shops, restaurants and apartment buildings. The view from my Spartan hotel room was of a building site. It looked as if it had been abandoned.

I was reminded of the girl’s words the following morning when I was walking through the Islamic quarter to the Church of the Holy Sepulchre, where Jesus’ tomb is and where Golgotha is, where he was crucified. My hotel was near Herod’s Gate. It seemed like a good idea to walk through the Old City, a walled medieval looking city with a Biblical core. Its walls were built by Suleiman I in the late sixteenth century when Jerusalem was part of the Ottoman Empire. They are massive, thick as a sand dune ridge at their base and still completely intact.

I decided to take a short cut by sticking close to the walls. I veered off the main alleyway and found myself on a winding lane that skirted sand coloured buildings like prison walls on each side. I rounded a corner and saw a stretch of empty lane ahead with steps and no humans anywhere to be seen.

My feet echoed as I moved fast in what I hoped was the right direction. I heard a shout and turned. But there was no one behind me. Which way now? Empty alleys led off to the right and left . Some of them were stairways. There was another shout behind me.
Two boys were racing down the street with satchels dangling. I hurried on. Soon I was at the great church mingling with the tourists, and glad to be there. The Church of the Holy Sepulchre, a pilgrimage destination since the early fourth century, was reconstructed a thousand years ago thanks mainly to donations by a Byzantine Emperor, Constantine IX. The previous church had been razed to the ground.

I went to Jerusalem in February, at the same time that The Jerusalem Puzzle is set, to ensure I experienced the weather, the smells and the feeling on the streets, and to get a good understanding of the daily life of the city at that time of the year. I also travelled far south to near Taba, the border crossing with Egypt, and through the Palestinian territories via Hebron and Bethlehem, near where scenes in the book are set. I passed through military checkpoints, saw guns drawn and crowds demonstrating.

Back in Jerusalem I went to the Wailing Wall and saw the devotion that people have for this site. I experienced the wonders of the Dome of the Rock and went around and around and deep under the Church of the Holy Sepulchre. Each of these sites has its own special feeling. Each has its wonders.

My background led me to spend more time at the Church of the Holy Sepulchre. It is also where some important scenes in the book are set. I was there early in the morning and as it closed at night with a special ceremony, one that is carried on and watched by Christian pilgrims each night of the year since the time of Saladin.

I found the interior of the Church beautiful and intriguing, although the number of Christian denominations in control of the site leaves much to be desired, for me, and illustrates the fractious nature of the descendants of those who follow Jesus. For me Mount Zion, just outside the city walls, was the most spiritual place I visited. As I went down a stone spiral staircase to the chapel commemorating where Mary died I listened to Polish people singing hymns.

The Negev Desert, the Judean Hills and the Dead Sea were all on my itinerary too. I visited villages off the beaten track and an old house with a palm tree drive that could easily be a model for the villa described in my novel The Jerusalem Puzzle.

I wish to pay tribute to the people of all faiths and none who welcomed me to Israel and the Palestinian territories and who let me eat with them and who showed such compassion and faith in an outsider, despite the terrible things that have happened to so many from all sides there and the fact that the conflict in this land is not over.

All photographs © LP O’Bryan. The Jerusalem Puzzle is out now from Harper Collins.