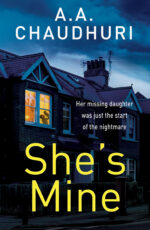 The Challenges of Writing From Multiple Perspectives by A.A. Chaudhuri

I’m hugely excited that She’s Mine, my first psychological thriller, is coming out with Hera Books in August. Unlike my Kramer & Carver legal thriller series, I chose to write it in the first person, and from multiple viewpoints, a process I found both challenging and rewarding.

There is no hard and fast rule as to how psychological thrillers should be written, and there have been countless psychological thriller bestsellers written from a single perspective: The Silent Patient, Apple Tree Yard and Blood Orange to name but a few. My story wouldn’t have worked, however, had it been written solely from my central character Christine’s point of view.

Although the story centres on Christine’s grief and guilt over her missing child, the ensuing dark and twisty turn of events that swiftly unravel after she receives a note revealing her daughter is not dead don’t just affect Christine; rather, they affect all of the main characters and in a big way. Furthermore, these other key characters all struggle emotionally as a result of Heidi’s disappearance and also owing to Christine’s previous and ongoing behaviour, and so it was important to me to be able to portray their trauma, as well as Christine’s, in a deep and meaningful way; something I don’t think could have been conveyed as convincingly through Christine’s eyes alone because, of course, only the person affected can know and explain how they are feeling, even though, this being a thriller, the reader will naturally be suspicious of whether they are getting the full picture or a biased version of the truth from whoever is speaking at the time. Then again, this surely adds to the suspense and intrigue on the reader’s part and keeps them turning the pages.

In addition, and on a more general note, seeing things through the eyes of multiple characters has the advantage of widening the scope of the story by introducing various sub-plots connected with the main plot, thereby ramping up the suspense and intrigue. Of course, there is every danger of the plot becoming overly complex and confusing, each new character introduced adding a new layer of intricacy along with the need on the author’s part to ensure that they are well crafted as opposed to one-dimensional players who a reader fails to connect with in the way they might with a single well-rounded narrator who they get to spend the entire duration of the book with. Each new character requires a ‘story of their own’ as it were, a story which must be developed as the main plotline progresses in order to give them a proper voice and purpose in propelling the plot forward. This is what I have tried to do with each of my characters in She’s Mine, through the use of flashbacks and present-day narrative, all of their stories in some way entwined with each other.

Like many things in life, it is a question of balance and judgement on the part of the author. Before introducing a new voice, the author must ask themselves – is this new perspective necessary in terms of enhancing and propelling the story forward and does it tie in meaningfully with the main character and plotline? If the answer is yes, then I feel it can only be a good thing, adding a layer of twistiness and uncertainty as to each character’s motives, while also allowing us to see the central character through another pair of eyes who may be able to shed light on their behaviour, past and present, as well as their flaws and misdeeds, which of course we wouldn’t otherwise be alive to.

All of my characters in She’s Mine are in some way connected to the main plot of the missing child. Not only that, they each play key roles in Christine’s life, and so it was essential to me that they be given their own voice. The book also revolves around dark secrets, not just on the part of the Christine, but the entire cast of characters, secrets which I wanted my readers to be in on as the plot unfolds, despite my main character being kept in a state of ignorance.

Writing from different perspectives can be challenging, but I also found it highly rewarding to write, and it forced me to really think about and hone my characterisation in order to make each character stand out from each other. In the case of She’s Mine, I felt it important for the reader to get inside the minds of each of my characters to fully appreciate their motivations and behaviour, and also allow them to spill secrets and revelations to my readers while keeping my poor characters in the dark!

She’s Mine is published by Hera Books in ebook and paperback in August. You can read more about A.A. Chaudhuri here.