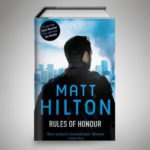 When his best friend’s father is murdered, Joe Hunter steps up to help deliver the kind of justice the courts can’t give. Together they uncover a family secret that has come back to haunt not only best friend Rink’s family but others as the killer takes out his targets. With the police after them and gangsters getting involved, the duo have a role as both protector’s and avengers.

With his eighth book in the series Hilton has mixed things up a little and given Rink some family problems as the driving force. This married with Hunter’s introspective reflections on the whole vigilante ideal, shows that Hilton is not content to rehash similar themes but is actively striving to improve both his writing skill and the reader’s experience. The result of this is a rip-snorting novel which is fast paced, exciting and yet self-aware enough to address its own belief system.

The central characters are as good as ever, although I did feel that the two cops on Hunter and Rink’s trail may have been given a little more page time as they had an interesting dynamic.

Throughout, the neat prose and tidy narrative kept me adhered to the story. I enjoyed the smaller-scale plot line as I can tire of world-saving adventures, and the way that Hunter made it personal elevated the novel further for me.

Rules of Honour is out now. If you would like your book reviewed on here, email us at info@thecwa.co.uk. CWA members only for now!