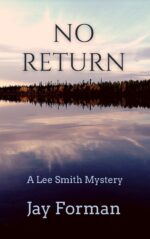 Research – So Much More Than Just The Facts, by Jay Forman

I did more research for No Return than I’ve ever had to do before for a book. I knew it wasn’t going to be easy. What I didn’t know was how ignorant I was.

The basic spark of an idea for the story was simple – murder and mayhem in a remote northern location, with some diamonds thrown in for sparkle.

I had to educate myself about: kimberlite pipes; aeromagnetic geophysical surveys (please don’t ask me for an explanation on that one, I’m just happy that I got the spelling right); diopside, picroilmenite, and pyrope garnets (previously known to me as ‘rocks’); Canadian Armed Forces rescue missions; glacier movements during the Ice Age … but those were just the technical facts.

The real lessons came while I was researching where I wanted to send travel writer Lee Smith for her second adventure: Webequie First Nation – a fly-in Ojibway community that’s closer to Hudson Bay than it is to Lake Superior.

I naively thought that I understood what it meant to be Canadian. My fifth great-grandmother migrated to British North America shortly after the American Revolutionary War, so having had family living here for over two centuries I figured I was pure red-and-white, with maple-syrup-flavoured blood and a hockey-puck-strong self-identity.

I learned some First Nations history in elementary school, but what we were taught then and the reality of what I know now are as different as butter tarts are from poutine. Through my character Lee’s eyes I discovered the beauty and wisdom in First Nations teachings. And I saw the ugliness of the vicious cycle started by the early explorers who trampled all over the places and the peoples who have been taking care of these lands for thousands of years.

Hopefully my newfound cultural appreciation comes through Lee with heartfelt sincerity. We both learned a lot, especially from the life lessons in the Seven Grandfather Teachings.

When I read about Mnaadendimowin, the buffalo, I began to understand real respect. Even though Mah-Oh-Rah (that fifth great-grandmother I mentioned before) was born into the Little Turtle Clan of the Mohawk Nation in New York Province, I hope she’d be proud of me for starting to fully appreciate all of North America’s indigenous peoples, including my very distant Mohawk ancestors and the Ojibway people who live in Webequie. It’s made me a better Canadian. As for Lee…

An elder in Webequie tries to teach Lee about Debwewin, the turtle who represents truth; he moves slowly because the journey is just as important as the destination.

Unfortunately, moving slowly has never been Lee’s strong suit, whether it be while landing a painful quadruple klutz on the rocky shore of a remote lake, or hurling dead squirrels, or while circumnavigating wolverine traps as she runs from a killer. If she takes a wrong turn she’ll be heading down a path with No Return.

Find out more about Jay here.