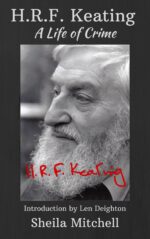 The Pleasure of Rereading, by Sheila Mitchell

H.R.F. Keating was one of the great pillars of British crime writing in the twentieth century; he was a crime fiction critic for decades, President of the Detection Club, Chairman of the CWA, Fellow of the Royal Society of Literature, author of over fifty novels and ten non-fiction books on crime writing, and winner of almost every award going in crime writing, including the CWA Diamond Dagger. His most famous creation is the beloved Inspector Ghote of the Bombay police, who appeared in twenty-five novels. Endemol Shine India have just announced their intention to develop a multi-part TV series based on the Ghote novels. His wife, the actor Sheila Mitchell, has written his biography and makes her literary debut at the respectable age of 94. Here, she tells us more about the writing process…

When I began writing H.R.F. Keating’s biography, I had a stroke of luck. I came across an American publication, Contemporary Authors, in which he had been asked how he would approach writing his autobiography. He prefaced his response by saying: My life in terms of the events that have occurred has been no different from thousands, from millions of others. But the books that it has come to me to write are perhaps, perhaps worth considering. He then went on to consider the books he wrote up to 1987, the date the article was published. I am not sure that the first half of that statement was entirely true but I was delighted that it seemed I had his approval to do what I wanted to do – make the books the centre of the biography I was about to start writing.

There are sixty-five of them, fiction and non-fiction. The non-fiction titles are all about crime writing and crime writers, but the fiction comprises a few ‘straight’ or mainstream novels. I started my rereading whilst writing the first five chapters, which cover the years from his birth in 1926 to 1959 (when his first book, The Perfect Murder, was published). I think I am glad that I do not have a photographic memory because, in some cases, I was able to read with a fresh eye. I should add that the most memorable, and there are quite a few of those, came back to me as soon as I started rereading them

What was really rewarding was that this was a thoroughly pleasurable experience. I must confess that I was guilty of not reading every word of the non-fiction books – something that I realised when, just recently, I was asked by that delightful publication CADS, to write an article devoted to them. Selfishly, I’m glad that I may have short-changed readers of the biography because it gave me this later opportunity properly to assess the diverse collection of ten books more closely and get to know even more about the man I was married to for fifty-seven years, because in many ways they are even more revealing of the author than his fiction.

Over and over again he voices his views on the value of well-written crime fiction. With passion he argues the superiority the genre can have over some who claim to be writing literature. It is sad that in some cases the ‘literary set’ dismisses genre fiction, which of course includes crime writing, as inferior. Fundamentally, Harry claims that the crime writer has a duty to tell an ongoing story, to entertain, to keep the reader glued to the page with a need to know what will happen next. And although the crime novel may have something serious to say, that must always lie a little below the surface and not detract from the telling of the story. He maintains that this is not always the case with the straight novelist, who can be so obsessed by some issue of burning importance to themselves that the reader’s need to be entertained is forgotten. He acknowledges that this is something of a generalisation but, nevertheless, he was undeniably a great champion of the crime novel.

Because I began writing the biography within a year of his death I might well have been overwhelmed by nostalgia. That this did not happen was entirely due to the strength of the material I was reading. Perhaps the fact that what was on offer was so varied also helped. There was a danger that H.R.F. Keating had become synonymous with Inspector Ghote, who was undoubtedly pivotal to Harry himself, but it soon became apparent to me that writing about the Victorian times was almost as stimulating as his imagined travels to India had been.

Distance, whether geographical or historical, activated his creative juices. The first of the Victorian collection, The Underside, was his second straight novel. The underlying theme was how much we should allow the underside of our nature to dominate. It is a wonderful exploration of the extremely dark, seamy side of Victorian London and does not pull any punches. But I was as much shocked that Harry could have ventured in his imagination into a world so far removed from our own more strait-laced, gentrified times as by the revelations themselves which, although fictionalised, came from hours and hours of meticulous research. He then drew on that research to write a Victorian crime novel, A Remarkable Case of Burglary, which I have no hesitation in placing among the best of his books. Then, later, came three novels about Miss Unwin, a Victorian governess – just three books, but countless short stories followed using that character.

By the time I got to the point in the narrative where I could start using the books as the background to the life, I was a long way into rereading the collected works. In many ways, writing the biography was what probably gave me back the will to live. From time to time I would have regrets for things that could have been done differently but, overall, being able to relive those years together and renew my knowledge of the books gave me the hope that by writing the book I might not only give past readers enjoyment, but that perhaps it would also encourage a new generation to become acquainted with H.R.F. Keating.

To find out more about Sheila’s biography and H.R.F. Keating head over here.