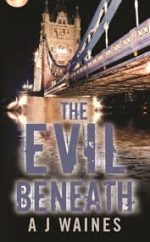 Music to my Ears – A J Waines

As a new fiction writer, specialising in psychological thrillers, I’ve taken no creative writing courses, joined no writers’ groups and even managed to fail my ‘O’ level English Literature. Not a solid grounding on which to begin a new writing career! Starting with a blank page, a novel is a daunting project, and having never attempted it before, I knew the first step on my writing journey was to learn as much as I could about the ‘craft’ of writing. I wanted to do this in my own way – but I wasn’t sure where to turn. There are stacks of bookings out there claiming to pass on the essential skills of a ‘best-selling’ author, but I’m never sure how many of those writers actually have well-known novels to their name?

Reading novels one admires is, of course, the obviously starting point for any writer, but every day I was already avidly reading the kind of novels I dreamt of writing. I realised the question I need to answer was: how could I read like a writer? How could I read in such a way that I would learn how a brilliant story was put together and the importance of elements such as structure, pace and character development? It I was to learn how everything in a crime novel worked, it would mean unpicking the basics – from how to begin and end a chapter, through to developing two or three seemingly disparate storylines. How was I going to learn all this when, in an accomplished novel, it all seemed to be embedded within the page?

Reading as a writer means switching on an extra eye – an analytical one – not one sitting back and enjoying the ride, but one that is observing, tracking, taking notes. I wanted to explore the writing, take it apart to discover what made a story I admired hang together and gave it dramatic impact. How could I effectively and consistently do this with a number of different novels?

Help came from an unexpected source. As a former music graduate and professional cellist, I’d studied the symphonies and concertos of great composters; taken them apart bar by bar. For my Master’s degree, I analysed several works by Shostakovitch. This process involved peeling away all the layers in the music: exposing harmonic progression, the role of prominent instruments, density, speed, contrast, openings and endings, texture, counterpoint between themes – it was all there!

As a result, I turned to my music training to help me to learn how to write. I set about looking at a psychological suspense novel like a piece of music. It’s not hard to see instant parallels with writing. Anyone who has studied Schenker will know what I mean by background, foreground and middle ground, but a writer will easily grasp these concepts too. It’s about structure, voice and which key points need to lodge in the mind of the audience for the finished product to make sense. It is also about texture, layering, which strands to bring to the fore at any one point, which strands to keep simmering away in the background. In novels, I started looking for elements like the flow of sentences and punctuation. Sentences, the building blocks of writing, have their own rhythm- you can have clunky sentences and well-paced ones. The words can suddenly stop. Start again. They can draw attention to themselves, be deliberately clunky and rough around the edges or be smooth and flowing.

A standard ‘Classical’ music form, the Sonata form, gave me additional tools for examination. Sonata form has been the stalwart structural form in music for centuries, from Mozart’s era right through to today, with composers such as Philip Glass still using variants of it.

Sonata form normally presents in three sections, similar to a three-act play, but all in one movement. There is often a prelude (which correlates to the novel’s prologue), followed by the exposition – the statement of a principal theme, followed by a secondary theme (laying out separate strands of a narrative which often start off entirely unconnected). Next, there is a development section where there is a conflict of keys, the home-key fighting to survive. There is intensity in this section with fugues, counterpoint and themes struggling one against another, building towards the climax. There are strange twists in terms of harmony (Beethoven was a master at progressing into the least expected key), then a recapitulation (the final section), where all the themes are explored, often in the triumphant home key. The coda rounds things off (like the novel’s epilogue) – it was all there!

I looked at how the writer, just like the composer, creates tension and shifts to resolution, how they both intertwine disparate themes and throw in a few red herrings! (Beethoven has a horn entry, for example, in the third symphony which sounds like it comes in the wrong place – it’s a tease, designed to throw the listener off balance). Pace is another quality that music and writing share. I explored mood, speed and intensity and before long I had a far better grasp of what I was aiming for.

Remarkably an ear attuned to the internal structure of music could also be aware of all the same kinds of processes going on in words – after all, stories were heard via spoken delivery long before they were ever written down. In this way, music helped show me how to write and I was able to put together my first novel, The Evil Beneath.

Find out more about A J Waines