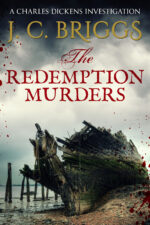 Mr Dickens and Me, by J C Briggs

Claire Tomalin observed that: ‘everyone finds their own version of Charles Dickens.’  Mine is Detective Dickens, the amateur sleuth who teams up with the Superintendent from Bow Street to investigate murders– and in the true spirit of the detective story – solves them.

Why Charles Dickens? Well, I thought why not? There are other literary figures as detectives: Edgar Allen Poe, De Quincey, and Oscar Wilde all appear as detectives. I came across a quotation from G.K. Chesterton which seemed to point me in the right direction:

‘… he had quite exceptionally bright and active eyes that were always darting about like brilliant birds to pick up all the tiny things … he was a sort of poetical Sherlock Holmes.’

Sherlock Holmes – that clinched it, and one of his biographers asserted that he harboured a secret longing to be a detective. So, why not?

In his letters, Dickens comments on contemporary murders: following the trial of the poisoner William Palmer in1856 he writes that Palmer is ‘the greatest villain that ever stood in the Old Bailey Dock.’  He witnessed the hanging of the Mannings in 1849 and argues robustly against public hangings in The Times. In 1860 he comments on the Road Hill murders, believing that the father, Samuel Savile Kent, father of the murderer, Constance Kent, is guilty of the murder of his son – he is wrong, but it was plausible. Murder was often on his mind.

Dickens is keen on motive. What’s his motive? he asked of his own characters. He writes perceptively of murder and its motives in his articles on capital punishment in the Daily News:

‘Some murders are committed in hot blood and furious rage, some for gain, some for the removal of an object dangerous to the murderer’s peace – murders done to sweep out of the way a dreaded or detested object. At the bottom of this class of murders is a slow, corroding, growing hate.’

From Dickens I took the desire to sweep out of the way an object dangerous to the murderer’s peace. In my first novel The Murder of Patience Brooke, the victim, assistant matron at Urania Cottage, is dangerous to the murderer. My research into Dickens had led me to the Home for Fallen Women, established by Dickens and Miss Coutts in 1847. What if, I thought, a murder took place there? The historical novelist asks: could this have happened? I thought it could.

Dickens’s London is ready-made for murder. It is the ‘City of Dreadful Night’. Fog, of course, thanks to Bleak House; bitter cold and dark, labyrinthine alleys, filthy slums, sinister faces, shadows: twilight, gaslight, moonlight, ghostlight – the gothic city. And Dickens knew it: ‘the walking ground of his heart’, as one biographer said.  He knew the alleys, the courts, the lodging houses, the disreputable pubs and he wasn’t afraid of it. George Sala records how he always found Dickens ‘in the oddest places and in the most inclement weather.’

I found him in the novels – plenty of murderers in them – the journalism, the speeches, and the biographies. And the letters have been invaluable for the biographical detail. Like the biographer, the historical novelist has to be faithful to the obvious facts: dates, wife, children, friends, places. And there are all sorts of interesting little nuggets: booksellers, his bootmaker, game dealer, wine merchant. The name and address of his milkman proved very handy when I came to write the fourth book. These are the details which create the sense of a life being lived outside the investigation.

The letters threw light on his character. They gave me his voice, his opinions, his concerns, his attitudes, his relationships, especially the private ones in the letters to family and friends. The research fires the imagination and I created my version of Charles Dickens. It is, of course, coloured by my cast of mind, my prejudices, my interpretation of the letters or works. I was looking for a detective hero – not a villain. I’m inclined to think that the murderer ought to be the villain.

I was predisposed to the good Mr Dickens, the man who would want justice done, the man who cared about the poor, the good friend, of whom Thomas Carlyle said, ‘the gentle, high-gifted, noble Dickens – every inch of him an Honest Man’. But there are some darker tones, of course. There are some the ‘dark, fateful, silent elements’ that Carlyle noted;  there are shades of the blacking factory in which he worked as a child, and there is the shadow of his relationship with his wife.

Yet, I felt with Claire Tomalin, that, despite his faults, he was wonderful. But it is only my version. And it is, of course, incomplete. No one could hope to create a complete Dickens who is, according to John Carey, ‘inexhaustible’.  Handy, that, though, if you want to write a series.

Find out more about J C Briggs and her series of books starring Charles Dickens as a detective here.