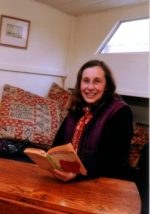 Where do your ideas come from? Chris Simms says that he’s sometimes tempted to tell audiences that he downloads them from www.ideasfornovels.com. But however much authors may dislike being asked that question, it’s a good one – and provides the stuff of literary biography. The working of the creative process can be so much odder that its results. A finished piece of fiction, however fantastic, feels real and inevitable: the intuitions and ideas that brought it into being may be as insubstantial as thistledown, as snagging as a burr or as frankly unbelievable as pixies in the night.

Margery Allingham’s first novel, Blackkerchief Dick (1923), an immature tale of rum and tushery, came into being as the result of a series of seances. These were no more than a summer holiday amusement, a way of passing the evenings in a rented house on Essex’s Mersea Island. All that was needed was a table, a glass and the letters of the alphabet arranged round the glass in a circle. I can remember doing something very similar at boarding school on the dormitory floor after lights-out. We spooked ourselves occasionally but never produced anything either coherent or memorable. With the Allinghams in 1921 it was different. From the very first evening there seemed to be spirits in the glass “who gave their evidence as carefully as if they’d been in a police court case”, as Margery’s father, Herbert Allingham reported afterwards.

Herbert Allingham was a professional writer of magazine fiction and so was his friend George Mant Hearn, who was staying with them. Philip Allingham, the youngest member of the party, was 15 and “inclined to scoff.” He would later become a fortune teller and eloquent bamboozler, as revealed by his autobiography Cheapjack (1934). After their first night “playing the glass” Phil was so convinced by the spirit-speak that he insisted on visiting the Colchester Record Office to check the truth of the story being told.

There was indeed some historical substance behind the tale of smugglers and murder but the Allinghams soon realised that it was Margery, aged 17, who was controlling events. There was no suspicion that she was cheating, merely that a story came spelling out letter by letter when she was at the table and slowed or stopped when she left. “My daughter appears to be a medium” wrote Herbert anxiously seeking some scientific explanation for what had occurred. There’s a box in the Albert Sloman library at Essex University that contains Herbert’s correspondence together with various local history newspaper clippings and, most movingly, the scrappy sheets of paper onto which the players’ questions and the spirit answers have been laboriously transcribed. When the family returned home to London after the holiday Margery write up the transcripts into her first novel, published by the prestigious firm of Hodder and Stoughton as a 7/6d hardback. Her father wrote for fifty years without achieving anything similar.

Letter by letter transcription is not a quick or easy way to  a book and it seems extraordinarily unnecessary for Margery to have chosen such a method when her family – and her father in particular – were eager to recognise her talent and support her career, whatever it might be. “One feels she may ‘go off’ in any direction,” he wrote to a close friend. Looked at more closely, however, it makes more sense. Herbert Allingham’s approach to fiction was willed and cerebral. He used his brains and his editors’ expertise to write his immense weekly sagas of disguise, disinheritance and wish-fulfilment. If there had been a www.ideasfornovels.com in the early c20th he would have been one of its most regular customers. When he and Margery worked together to produce her second novel Green Corn (n.p.) he used the classically sound-but-boring advice “write about what you know”. She duly converted the doings of her earnest young friends at the Regent Street Polytechnic into narrative and the result was so utterly uninspired that it has never been published and never should be.

Blackkerchief Dick, the result of the Mersea Island seances, is not a good novel but it is readable. It has a shape and a feeling of conviction and the passages that deal with the mud and the marsh and the sheer wildness of the location have true imaginative power. Whatever the actual psychological mechanism involved, the unplanned fiction of the seances (and I will go to my grave convinced that Margery never consciously manipulated events) allowed the teenager to write about sex and violence and to use language more freely that she could ever have achieved with even the most kindly and permissive family encouragement.

www.ideasfornovels.com does, in a sense exist, as it’s the small number of archetypal myths (the ‘seven basic plots’)  that can be shown to lend their patterns to story structures across the cultures and throughout the centuries. Blackkerchief Dick – stranger arrives in small enclosed community, upsets settled relationships, misleads trusting female and ends in tragedy – can be seen as a Dido and Aeneas story, for instance. Allingham dramatised Dido and Aeneas as a college production with her friends but the effect is completely different from Blackkerchief Dick. The novel gains vitality from its bleak setting and rustic characters. I certainly wouldn’t advise any reader new to Allingham to begin reading with Blackkerchief Dick but that same combination of of mud and marsh and enclosed community is the stuff of her first proper Campion novel, Mystery Mile. But this time with the addition of that quintessential Allingham ingredient – humour.