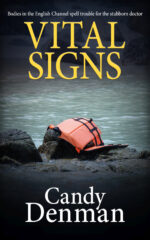 When I was working on the long-running drama series, Heartbeat, we were often told that the biggest character we wrote for was the setting. How true that was. Whenever I tell people that I used to be a scriptwriter on the show, they always end up talking about the beautiful North Yorkshire Moors – and the old cars featured in the series, of course.

It’s clearly important for a writer to pick a scenic or atmospheric location if they ever want to get their book filmed. Where would Doc Martin be without the Cornish coast, Ballykissangel without the Irish countryside or The Third Man without rainy, foggy Vienna?

But even if you are not planning on the film and TV rights of your work in progress being snapped up, there are a number of things that a writer should think about before deciding on a location for their books.

Firstly: should it be fictional or real?

Setting your book somewhere real immediately gives it authenticity – if you describe the place accurately, that is − but also immediately gives you a headache. You have to know the place well enough to describe it and that also means keeping up to date if you are setting it in the modern day. Street view on Google maps is a godsend for writers who do not actually live in a place, but it gives you a snapshot of one day and can’t tell you that a week later, that shop closed and a block of flats was built on the site. Get anything wrong and you will get letters; believe me, I know from experience.

No problem, you say, I’ll set it where I live, that way I will see when there are any changes. The trouble is, everyone knows you and that you write about where you live. They will all assume they are in the book. No matter how much you insist that no one you know features in your work, they will be affronted if they can’t find themselves, or worse, they will take you to task for making “their” character fat/nasty/a necrophiliac. (In my experience they object more to being described as fat than as a necrophiliac, which is worrying.)

Also, setting a book in a real place can give you very real anxieties about saying anything bad about the local hospital, doctors, councillors, pubs, restaurants, etc. Even though the book is clearly a work of fiction and has a disclaimer at the beginning, and you have checked every name of every doctor/nurse/councillor is not a real local person, you live in fear of headlines saying “Local author outs well-loved teacher as sex addict”. I have compromised in my series set in Hastings on the south coast of England.  It’s a place I know well and visit regularly, so I can get it right when I want to, but I also, very deliberately, change things.

I have renamed and moved the local hospital and mortuary. I have renamed pubs and clubs that I describe as seedy or where criminals meet. I have also sometimes had to move other places, or shorten distances in order to make the story flow. It would be quite boring in a chase scene to say something along the lines of “She took the first right up Rowbottom Close then the alley that went through to Hammersmith Way, then left along the High Street for twenty-five yards…” and so on. But that doesn’t stop the letters explaining why the chase should have been longer or the alley I used as a short cut doesn’t actually lead where I wanted it to.

So, picking a fictional location would seem to save yourself a whole lot of headaches. And it does, but you lose the people who want to read a book about their town. You can try and have the best of both worlds by saying it is loosely based on such and such a town, but it won’t have the same pull of a real location for the people that live there.

Secondly (getting back to what a writer needs to think about when choosing a location) is: does it suit the needs of the book(s)?

Sometimes the location chooses itself in that if you are writing about a fisherman, you pretty much have to pick a fishing port, and a big city firm needs to be in a big city, but otherwise the world is your oyster and you can choose the setting to suit your book. If you are writing a gritty crime book, you might want to consider inner city streets in the rain, a light-hearted romance might be in a rural village and an adventure story in wild countryside.

It becomes something that needs more thought if you are planning on writing a series of books. The protagonist might move around, of course, but generally the series will be set in the same place and the writer has to ask if their chosen location will sustain it. Although, Midsomer managed to be home for a vast number of murders despite being a tiny, sleepy village, and no one seems to mind, so this might not be as important.

As for me? Well, I chose Hastings as the setting for my Dr Callie Hughes series because it has a lot of different sides to it. It is a fishing port. It is a tourist resort. It has Londoners who have moved out of the city and locals who resent them. It has the Old Town and the new town. It has poverty and wealth. It has the second highest heroin death rate in the country and it has a lot of old people. It is set in the most beautiful countryside and it has the sea.  A town with that many aspects can provide and support an enormous number of stories for a writer. And it would look great on film – just saying.

Read more about Candy and her novels here.