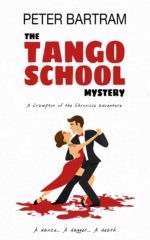 Where do you get your ideas? Crime writer Peter Bartram lifts the lid on his source…

When people hear that I’m a crime writer, the question they ask most often is: where do you get your ideas from?

I guess I’m not alone among crime writers in finding that’s the number one query from readers. In the case of my Crampton of the Chronicle comic crime mysteries, quite a few of the ideas have come from my own life as a journalist.

For example, I was once asked by my news editor to interview an elderly man who claimed he was being systematically robbed by his relatives. When I visited his house, I was astonished to find one large room so full of old clothes it was impossible to get into it. The clothes were piled so high in some places they almost touched the ceiling.

I asked him how the clothes came to be stacked like that and how they fitted in with his story of being robbed by his relatives. I spent more than an hour with him, but couldn’t get any kind of coherent answer. He rambled about different troubles none of which seemed to be connected to the clothes or the alleged thefts. I had to tell my news editor I didn’t have any copy for him.

But when I became a crime writer, I remembered the incident and wrote a short story which provides a fictional explanation for the clothes in the room. You can find the story in my free e-book Murder from the Newsdesk available from Amazon and other main e-book providers.

On another occasion, I was covering a routine case at a magistrates’ court. After the hearing, the defendant, who’d been found guilty of a relatively minor crime, waylaid me outside the court and threatened me. He said I’d regret it if the story appeared in the paper. I mentioned this to the editor and he insisted on running the piece on the front page even though it was such a small story we’d normally not have used it. That incident made it into Headline Murder, my first book in the Crampton series.

But the plot trigger for The Tango School Mystery, the latest book in the series, came from something that happened when I sold my first story to a national newspaper. I was working as a reporter on a local newspaper in Worthing in my “gap year” – although we didn’t use the term then – between school and university.

The year was 1966 and a general election was expected any month. Two years earlier, Harold Wilson’s Labour government had been elected with a wafer-thin majority of three. Everyone knew that as soon as Wilson thought he could increase his majority, he’d call a general election.

It was against this background that one day my news editor sent me to cover an evening political meeting. It was held in a draughty church hall and there was a sparse audience of about 30 people. I’d never heard of the speaker before, but he turned out to be a weird middle-aged guy with an irritating smirk and bizarre views.

He stood up and started spouting about a whole range of off-the-wall policies that would make Britain great again. At one point, I thought he was advocating giving votes to dogs, but I may have got that wrong.

It wasn’t clear what he wanted – except that he hated pretty much everyone with the notable exception of Sir Oswald Mosley, the notorious British fascist leader from the 1930s. (Mosley was trying to make a come-back and contested a London constituency at the 1966 general election. He garnered a derisory handful of votes.)

At the end of the meeting, the speaker announced he’d be standing at the forthcoming general election. In those days, almost all elections were three-cornered fights – Conservative, Labour, Liberal – so to get another candidate anywhere was a novelty. And the fact this bloke was a fruitcake would add extra colour to the story.

I knew the piece would make ink in my own paper, but I thought I could sell it to one of the nationals. I figured the broadsheets would be most interested. I decided The Guardian would be the best bet.

So I left the meeting and called the paper from a phone box on Worthing seafront. I got put through to the newsdesk and explained the story. They said they’d take three pars. The news editor put me on to a copytaker. I dictated the story direct from my notes while the copytaker typed it out.

The Guardian paid me £3 for that (about £52 in today’s money) and the experience made me wonder whether there could be an interesting long-term career in journalism. Anyway, fast forward to 2017 and I was thinking about my next Colin Crampton adventure and I remembered the incident.

A plotline started to coalesce in my mind… The 1964 general election is due and a pre-war fascist returns from exile to fight the election in Brighton. But soon people are dropping dead and the bodies all seem to be linked in some way to the candidate. Needless to say, Brighton Evening Chronicle crime reporter Colin Crampton is on the story.

I’ve named my fictional fascist Sir Oscar Maundsley, but as it says on the verso page on most novels, any resemblance between real people living or dead is purely coincidental! As it happens, I once came unexpectedly face-to-face with the real fascist Sir Oswald Mosley in a lift! It was a few years later and I was working as a reporter on a paper in London.

Our encounter lasted no more than 20 seconds as the lift travelled between two floors but it provided me with some useful insight when I came to develop my Maundsley character. But that, as they say, is another story.

The Tango School Mystery: A Crampton of the Chronicle adventure by Peter Bartram is available on Amazon for Kindle (£2.99) and in paperback (£8.99).