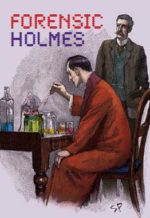 The most famous detective of all time, Sherlock Holmes, made his first public appearance in December 1887 in Beeton’s Christmas Annual. The story, A Study in Scarlet, was not an immediate success when it was reprinted by Ward Lock & Co. in the following year. That was unsurprising, however, for in August of that year the first of Jack the Ripper’s many victims was added to the already high crime statistics of London. The appetite of the Victorian reading public enjoyed a full enough saturation of bloody murder and mayhem from the popular press of the day.

But perhaps there was another reason for the story’s distinct lack of success. The detective within its pages was unlike any other. Arrogant, haughty, contemptuous of the official police-force but equipped with a rapier –like intelligence and all the resources of modern science, Sherlock Holmes reached his results by an apparently magical process.

To today’s audience, the facts of forensic science are commonplace. But who, in 1888, had heard of fingerprinting? Certainly the London police did not accept it as a practical science. If they had done so, the mystery of jack the Ripper would certainly not have remained thus. Handwriting identification was also in its infancy. An Austrian judge, Hans Gross, had realised its tremendous potential, but clearly the C.I.D (set up in 1877) did not think to analyse the three grim letters sent by the Ripper to the news agencies. In those days there was a distinct lack of co-operation between the medical profession and the police. All but one of the Ripper’s victims were removed from the scene of the crime, their bodies stripped and washed ready for the mortuary, thus destroying valuable forensic evidence.

This predicament is well reflected in A Study in Scarlet when, faced with the pathway outside No. 3 Lauriston Gardens, Brixton, Holmes remarks, ‘if a herd of buffaloes had passed along there could not be a greater mess.’

The date of Holmes’ career debut (1881) is an important one to the student of criminology. Only a year before, a young assistant in the Paris Prefecture of Police, Alphonse Bertilon, had laid the cornerstone of modern criminology with his development of the ‘bertillonage’ system of measurements for criminals. And a year before that, in the pages of a magazine called Nature, a Scottish physician named Henry Faulds, made a number of observations about the ‘skin-furrows’ in human fingers (which)… may lead to the scientific identification of criminals.’

But in Victorian England Parliament had not yet passed a bill providing for the registration of habitual criminals, complete with dossiers, whilst the system of finger printing did not gain official recognition until as late as 1895.

Sherlock Holmes represented a revolutionary trend, therefore, in the investigation of crime in England. The public of the time certainly shared his contempt for the official detective force but they were also understandably puzzled by his approach. This was really because Holmes was first and foremost a pioneer of new techniques which very soon would change the face of Scotland Yard.

The detective’s own wide knowledge of classic murder cases and of the circumstances of their victims’ demise certainly assisted him in the detection of crime and the speed with which he reached his conclusions. Dr Watson records that Holmes mentions that ‘The forcible administration of poison is by no means a new thing in criminal annals. The cases of Dolsky in Odessa, and of Leturier in Montpellier, will occur at once to any toxicologist.’

One suspects that the Commonplace and other books which cluttered the interior of 221B Baker Street, far from gathering dust, were stuffed to the brim with excepts from The Police Gazette and cuttings from the newspaper reports of sensational murder trials of the period. And Holme’s brain was, we recall, like an attic, from which all types of useful data could be extracted in order to provide a useful comparison.

Any criminologist knows that the existence of a pattern in crime of murder is of supreme importance to the investigator. And the recognition of a patter in the early stages of an investigation gave Holmes an advantage over the official police force of the day, whose methods lacked a definite system. It is therefore not surprising that he was once compared to Alphonse Bertillon, the great French criminologist.

Holmes recommended that the most practical thing a detective could do was to ‘shut yourself up for three months and read twelve hours a day at the annals of crime,’ and pointed out that ‘It’s all been done before, and will be again.’ For that reason, he spent most of his professional career absorbing and becoming expert upon a wide range of specialised knowledge, including tobacco ashes, cryptography, newspaper types, perfumes, toxicology, the dating of documents, bicycle tyres, tattoos, footsteps, the influence of the trade on the form of the hand, and the name and trademarks of the world’s major gunmaking firms. He also showed considerable interest in anatomy, an interest which Watson described as ‘accurate but unsystematic,’ and twice applied the knowledge in the form of practical experiments.

Although he claimed to have investigated over five hundred cases in the course of his career, a surprisingly small number (38%) dealt with murder. Fourteen of these 23 resulted in the murderers being arrested or killed, three involved non-human agents, and in all fourteen Holmes made a successful analysis. In five other cases, Holmes succeeded in identifying the criminals but the murderers escaped the reach of the law, and in four other cases Holmes gave the murderers their liberty, because there were extenuating circumstances involved.

Today’s forensic scientist would have found the range of murder cases fascinating. Among the causes of death were gassing, poisoning, asphyxiation, and death from head injuries, comprising a variety of blunt instruments and guns. In the vast majority of these cases, a quick eye for detail at the scene of crime led Holmes to the murderer with remarkable rapidity. The principles he espoused in the detection of crime are no different today than they were in the 1880s: the power of observation, the power of deduction, and a wide range of exact knowledge.

In a period when forensic science was still in its infancy, Holmes was a man at the top of his league, and this accounts for much of his success as an investigator. He made full use of many of the forensic fields now permanently established: toxicology, ballistics, document examination, even graphology. One of the most useful areas of forensic investigation is that of contact traces, which encompasses the principle that an encounter between victim and murderer leads often to small traces of contact, e.g. blood, fibres, hair. One recalls that one section of the rooms of 221B was devoted to the chemical retort and the microscope especially for this purpose. These days, of course, no one man or woman investigates the causes and effects of a murder. The whole thing is a complex process, involving a variety of experts. In Holme’s day, there was no alternative but to become Jack of All Trades. He was sometimes called upon to be police surgeon, forensic analyst, and detective, all at one time. That he did this with such a measure of success places him in a unique position in the annals of crime. In the field of fictional Victorian criminal investigation, he remains unique.

Kelvin I. Jones has been writing about Sherlock Holmes and Conan Doyle for over 40 years. Apart from his many books on Holmes, such as The Sherlock Holmes Murder file, he is also the creator of the dogged Norwich detective DCI Ketch, who first made his appearance in the ebook Murder Most Easterly.