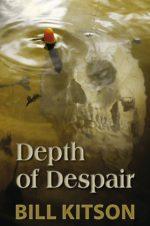 Finding the Plot by Bill Kitson

‘There’s always a story. It’s all stories, really. The sun coming up every day is a story. Everything’s got a story in it. Change the story, change the world.’

One of the questions I’m most frequently asked at events is ‘Where do you get plot ideas?’ If I knew that I’d bottle it, sell it, and probably make more money than writing them. There is no easy answer, because every author approaches the task in their own way. I once heard Jeffery Deaver explain that he’d made 150 pages of plot notes for one book before he started on the actual novel. Conversely, I read that James Lee Burke sits in front of a blank screen and begins to type with no clear idea where the plot will lead him.

I’d say my style is somewhere between those extremes, in that the plots for my books are organic. They spring from a single idea. Knowing where the next idea might come from is an art I haven’t mastered – and I doubt if I ever will. As long as they keep coming I’m not too concerned with trying to find out. Here are some instances from my own writing.

My first Mike Nash thriller was Depth of Despair. This wasn’t my first attempt at writing crime but the storyline was too powerful to ignore. The initial idea was sparked by trout fishing weekends I’d spent at a remote mountain tarn. Having rowed to the middle of the lake I dropped anchor and paid the rope out for so long that I thought, ‘There could be anything down there.’ It was some years later I remembered this and had the vision of a lone angler pulling up a skull.

In Minds That Hate all I had was a vague thought that might confound readers. It was to have a man convicted of rape and murder on absolutely cast-iron evidence – DNA included, except that he was innocent. Building a full story from there wasn’t easy.

I try to give my books titles that reflect the content. Hence Altered Egos came from an idea about chemists developing a mind-changing drug to feed combat troops before they went into action. My research later revealed that the CIA might well have had the idea long before I did!

The plot for Buried in the Past evolved after I read a chapter in the late Peter Walker’s Murders and Mysteries from the North York Moors which relates the real life unsolved murder of a victim known as the Mystery Lady of Sutton Bank. Almost forty years later she is still unidentified, despite recent familial DNA comparison to eleven families with missing relatives who fitted the profile.

The most entertaining source was for Dead and Gone. We were attending a formal dinner and listened to a fellow guest’s tale of her own bad experiences as a bank internal auditor. These included a gun-toting bank manager in Eastern Europe, a bomb attack on the restaurant she’d used there, followed by attempts to enter her bedroom in a Bristol hotel on three separate occasions, and an unwanted sexual advance on a train to Leeds. While every other guest was horrified, sympathising with her dreadful ordeals – I was busy making notes on the back of the menu. I did of course ask her permission later.

The idea for my latest Mike Nash thriller, Picture of Innocence wasn’t mine. It stemmed from my wife’s dream about a game of hide and seek. This was while we were on holiday in Crete. The sun lounger remained unoccupied for the next two days as I expanded the plot.

In my Eden House Mystery series the first title, Silent as the Grave resulted from League Cricket committee meetings I attended in Ripley Castle. I asked the owner, League President Sir Thomas Ingilby, if the castle had dungeons. He replied, ‘We prefer to call them wine cellars.’

All those ideas formed the basis for some of my plots. Getting the idea is one thing. Developing it is yet another and it can lead the author down surprising routes, paths he or she never intended to take. There were two instances of this in my Mike Nash titles. I write everything longhand before transferring it to the computer. In Depth of Despair after discovery of the skull, police divers bring up a skeleton. Having recovered the final arm they are about to leave when the pathologist tells Nash that the arm doesn’t belong to that skeleton and there must be another body in the tarn. Having typed that sentence I checked the handwriting and it wasn’t there. It was too good to leave out so I had to develop the story in a totally different way. I always conduct thorough research for any plot, I mentioned my wife’s dream earlier, but my findings in this instance caused me vivid and frightening nightmares. Not wishing to waste these, I gave them to Nash.

I was thirty thousand words into the plot of Buried in the Past when I realized although the body count was rising I’d no idea who the killer was. One evening while cooking dinner, I got a flash of inspiration. A few adjustments to the existing story and the rest of the plot followed – with a far better ending than my original idea.

One key element for a successful outcome is that the plot must fit the characters and vice versa. The best plot devised would fail if readers failed to relate to the protagonists, be they good or evil.

A fellow author once told me, ‘Your characters must be so credible that you’d recognize them if they knocked on your door.’

Another question I’m often asked is, ‘What’s your next book about?’ My stock answer, ‘I could tell you – but I’d have to kill you.’ Now there’s another plot idea!