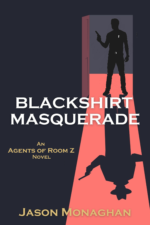 We all hate fascism, agreed? If not, stop reading here. When we were young, ‘the Germans’ were the baddies in our games, on TV shows and those stalwart WW2 films. Only when I began to study history properly did I understand the difference between the Germans as a people and fascism as a creed. ‘Good Germans’ are the detective-heroes of the novels of Luke McCallin and Phillip Kerr. The heroes of the ‘what if’ novels of Len Deighton’s SS-GB and Robert Harris’s Fatherland have to work within a frightening alternative reality. We empathise with characters serving a regime they do not believe in, and we see the shadow of the hardened Nazi, the Gestapo and the SS falling over the characters’ lives. The ‘Good Germans’ become victims too.

The Czechs faced this horror at the hands of SS Obergruppenführer Heydrich, the subject of Howard Linsky’s Hunting the Hangman; he shows up the contradiction in many Nazis, as when home from being a ruthless liquidator of undesirables Heydrich apparently loved his family.

The Nazis have become the poster boys for evil chic; smart uniforms, skull badges, black leather coats, sinister swastikas and screaming eagles. Unnervingly this still lends them glamour, shown by the auction value of SS daggers and the like. History-porn TV documentaries and books endlessly probe into their mystique and their influence extends routinely into Science Fiction, such as the barely disguised First Order of Star Wars Episode VII. Neo Nazi groups still strut around, ignorant of how decisively the fascist creed was crushed.

It is so easy to cast fascists as the bad guys that writers must avoid becoming lazy. We know they were bad; we get it. The writer must make the reader care about the characters opposing them, or oppressed by them, or forced to co-exist with them; we know how fascism ultimately fell, but the characters don’t.

‘Anti-fascists don’t want to understand fascism; they just want to destroy it,’ as one of my characters quotes. We hardly dare wonder now what the appeal was, but ordinary people were pulled into the ranks of the fascists, and the writer needs to explore their motivations if they are not all to be written off as brainwashed automata.

My Agents of Room Z series of thrillers is set in a Britain where fascism is a growing threat. Blackshirt Masquerade begins in 1935, when Hugh Clifton is persuaded by an old friend in the Security Service to infiltrate Sir Oswald Mosley’s Blackshirts. Most of the people he mixes with are fascists, so my challenge was to create a cast of characters who are not all stereotype heel-clicking Nazis. We in modern times know the depths to which fascism plunged, but for Blackshirt recruits of 1935 the fascists were just a new political party offering new solutions in troubled times.

This gives scope for Hugh to move among the whole spectrum of people attracted by Mosley and fascist ideology. Recruits were sick of a Conservative-dominated government led by an idle Prime Minister doing nothing about three million unemployed, poor housing and low wages. Labour was weak, divided and complicit. Activists disillusioned with communism, jingoists starry-eyed about the Empire, militarists wanting Britain to re-arm, failed businessmen, frustrated suffragettes, antisemites, criminals and bored aristocrats all added to the mix. Throw in Soviet and German agents and there is a rich seam to mine.

Mosley was upfront about his party being an anti-democratic movement. He aimed to take power by whatever means necessary, after which as ‘The Leader’ he would rebuild the country on a new model. For all the shiny dreams of its architects a fascist Britain would inevitably have slid down a similar path of repression as Germany, Italy and Spain. Department Z was the fascist intelligence unit, which would have grown into something resembling a British Gestapo given the opportunity. We now know that Mosley failed and became no more than a footnote to inter-war history, but it was not a foregone conclusion.

Britain’s Security Services had very little idea what Mosley was really up to, what his strength was or where his money came from. Their main focus was on communist agents, and perversely MI5 employed fascists in ‘dirty tricks’ against socialists and MI6 co-operated with the Gestapo. During my research I was surprised how amateur Security Service operations were, and how chronic underfunding led them to rely on men of independent means.

Enter Hugh Clifton, disgraced army officer and would-be detective novelist investigating a plan to undermine British democracy. Idealistic socialite Sissy is worried about a close friend’s sudden disappearance, and the unlikely couple unite as both plots become entwined. A twist of fate turns Hugh into a Blackshirt hero, leaving him with a choice of who to trust and who to betray.

Blackshirt Masquerade by Jason Monaghan is published in March 2022 by the Historia imprint of Level Best Books.