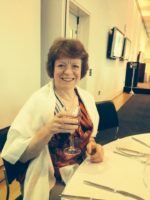 I’m still a newbie, a newly published author.   But that, obviously, doesn’t make me new to writing.   Like most of my species I’ve been scribbling away at one thing or another for years, sending stuff off to agents and publishers and building up a big enough pile of rejection slips to paper my walls.

It all changed last year when the publishing company, Lion Hudson, decided to introduce an imprint called Lion Fiction and I heard they were looking for new work.   The publication of my first novel is the result and the whole process has and continues to be totally thrilling.

Game, Set and Murder is a crime thriller set in Wimbledon against the background of the tournament.    Although I love tennis (it’s the only sport I follow) and I revel in the whole razzamatazz of that fortnight each summer my reason for setting the story there had nothing to do with tradition or ‘hallowed lawns’ and everything to do with, well, marketing, I suppose.

It’s what I personally call ‘the Dick Francis Principle.’   In his book, In the Frame the main character is a painter of horses and at one point he says something along the lines of: I can paint a picture of a chestnut horse on a patch of heath land, call it ‘Chestnut Horse on Heath land’ and sell it for £50.   Or I can paint the same picture, call it ‘Arkle on Newbury Downs’ and sell it for £500.

So there you have it, what I hope will be the first of many novels featuring my protagonist, D. I. Angela Costello of the Metropolitan Police.   I’ve made Angela a tennis fan, like myself but she won’t be too distracted by the American Open to get stuck into her next case.   Dead Gorgeous, the second in the series, due out this October, is set in the fashion industry, leading up to London Fashion Week.   Again, why invent a fashion show when . . .?