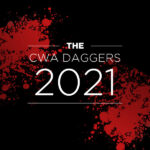 The winners of the 2021 CWA Daggers, which honour the very best in the crime writing genre, have been announced.

The prestigious Crime Writers’ Association (CWA) Daggers are the oldest awards in the genre and have been synonymous with quality crime writing for over half a century.

Winner of the CWA Gold Dagger, which is awarded for the crime novel of the year, goes to Chris Whitaker for We Begin at the End. Past winners of the Gold Dagger include John le Carré, Reginald Hill and Ruth Rendell.

Praised as ‘truly memorable’ by the CWA judges, We Begin at The End has been a Waterstones Thriller of the Month and sold in 17 territories, with screen rights snapped up by Disney. Chris Whitaker was first recognised by the CWA as a debut author, when he received the John Creasey (New Blood) Dagger in 2017 for Tall Oaks.

Chris has said writing ‘saved his life’ twice. He began writing as a therapeutic response to being mugged, and stabbed, aged 19, then later falling into serious debt in his job as a city trader. Quitting his finance job in London aged 30, he moved to Spain to write his debut novel.

Maxim Jakubowski, Chair of the Crime Writers’ Association, said: ‘This year’s Gold Dagger shortlist featured remarkable books, but We Begin at the End is an astoundingly beautiful and moving achievement in storytelling. Chris’s talent shone through when we awarded him the John Creasey Dagger in 2017. It’s inspiring to see him now take Gold, and I’m delighted that the CWA judges recognised this now acclaimed author from the very start.’

S A Cosby for Blacktop Wasteland and Nicci French with House of Correction were also Highly Commended in the Gold Dagger category.

Michael Robotham, who won the Gold Dagger in 2015 and 2020, wins this year’s Ian Fleming Steel Dagger for best thriller, for When She Was Good.

The Ian Fleming Steel Dagger is sponsored by Ian Fleming Publications Ltd, the Fleming family-owned company that looks after the James Bond literary brand. CWA judges praised the novel as ‘an urgent, poignant and terrifying thriller’.

Born in Australia, Michael worked as a journalist in Australia, America and the UK – as senior feature writer for the Mail on Sunday – before becoming a ghost writer collaborating with politicians and show business personalities to write their autobiographies. Since his first psychological thriller, The Suspect, caused a bidding war at the London Book Fair in 2002, his novels have won numerous awards and been translated into 25 languages.

The much-anticipated John Creasey (New Blood) Dagger highlights the best debut novels. This year the accolade goes to Eva Björg Ægisdóttir for The Creak on the Stairs. The Icelandic author wrote her debut while working as a flight attendant and juggling being a mother, writing the first draft in just nine months. It was a bestseller in Iceland before being picked up in the UK by Orenda Books.

Vaseem Khan wins the Sapere Books Historical Dagger for Midnight at Malabar House, set in 1949/1950 Bombay. Born in London, Vaseem spent a decade in India as a management consultant. Since 2006 he has worked at University College London’s Jill Dando Institute of Security and Crime Science.

The Crime Fiction in Translation Dagger goes to South Korean author Yun Ko-eun for The Disaster Tourist, translated by Lizzie Buehler, praised by the CWA judges as a ‘wildly entertaining eco-thriller’.

The ALCS Gold Dagger for Non-Fiction is awarded to forensic pathologist, Sue Black, for Written in Bone praised by the CWA judges as a ‘humane, wise book’.

The CWA Daggers are one of the few high-profile awards that honour the short story. Clare Mackintosh wins the award with her short story ‘Monsters’ in First Edition: Celebrating 21 Years of Goldsboro Books. The judges praised it for its powerful twist.

The Dagger in the Library is voted on exclusively by librarians, chosen for the author’s body of work and support of libraries. This year it goes to Peter May. The Scottish author has become well recognized for his work both as a novelist and in film and television. His books have sold several million copies worldwide and have won awards in the UK, the USA, and France.

Chair of the judges, Sue Wilkinson, said: ‘Peter May infuses his books with a real sense of place, whether it be China, France or the Hebrides.  His books are tense, atmospheric and complex but always utterly absorbing.’

One of the anticipated highlights of the annual Daggers is the Debut Dagger competition, open to unknown and uncontracted writers. The competition for unpublished writers can lead to securing representation and a publishing contract. This year the winner is Hannah Redding for Deception.

The judges said: ‘Deception has all the ingredients of a compelling mystery, complete with unreliable narrators, a cut-off location and a nicely compact time frame.’

Fiona McPhillips was also Highly Commended for Underwater. Praised as being ‘full of intrigue…  The issues of class, sexuality and power explored were very well done.’

The Best Crime and Mystery Publisher of the Year Dagger, which celebrates publishers and imprints demonstrating excellence and diversity in crime writing, goes to the independent publisher, Head of Zeus. Established in 2012, Head of Zeus went from start-up to a multi-million-pound business and positioned itself at the forefront of the eBook revolution.

Maxim said: “These awards testify to the wealth of great books and diversity within the crime genre. The Daggers are assuredly the best and most accurate reflection of what’s happening on the crime and mystery writing front, with all judges independent of the CWA and renewed on a regular basis.”

The winners were announced at a virtual ceremony on I July, Daggers Live! dubbed the ‘Oscars of the crime genre’.

Martina Cole also featured at the awards event as the recipient of the 2021 Diamond Dagger for lifetime achievement, the highest honour in British crime writing.

One of the UK’s most prominent societies, the CWA was founded in 1953 by John Creasey; the awards started in 1955 with its first award going to Winston Graham, best known for Poldark. They are regarded by the publishing world as the foremost British awards for crime-writing.

CWA DAGGER IN THE LIBRARY

(Competition for an unpublished novel)

Awarded every year to an author whose crime-writing career has been marked by sustained excellence, and who has made a significant contribution to the genre. Votes from CWA members go forward to be deliberated on by an independent panel.

This Dagger is announced in early spring each year and in 2021 it was awarded to Martina Cole.

To view past winners, or find out more, please visit https://thecwa.co.uk/the-daggers

ALCS – Sponsors of the Gold Dagger for Non-Fiction

About the Authors’ Licensing and Collecting Society: The Authors’ Licensing and Collecting Society (ALCS) is a not-for-profit organisation started by writers for the benefit of all types of writers. Owned by its members, ALCS collects money due for secondary uses of writers’ work. It is designed to support authors and their creativity; ensure they receive fair payment and see their rights are respected. It promotes and teaches the principles of copyright and campaigns for a fair deal. It represents over 100,000 members, and since 1977 has paid around £500 million to writers (alcs.co.uk).

Sapere Books is a digital-first publisher with a keen interest in historical and contemporary crime fiction and thrillers. Having launched in March 2018, Sapere Books now has many authors signed to its list and continues expanding. It is always keen to hear from crime writers, particularly those who are working on a planned series, or who have out-of-print titles which could be reissued digitally.