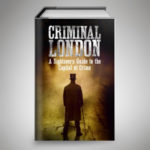 London as a city has a dark and criminal past – and a new book provides the definitive guide to the capital’s crimes.

From Sherlock Holmes’ Baker Street and Jack the Ripper’s Whitechapel to the East End of the Krays and the white-collar crooks of the City, London has played silent witness to countless crimes both real and imagined. In print and on screen the city has exported its criminal heritage to the world, becoming a global capital of wrongdoing. Yet there has never been a guide to its darker points of interest – until now.

Traversing centuries of villainy, Kris and Nina Hollington’s Criminal London explores the more scandalous moments of the city’s story, revealing the many reminders that remain of a rich criminal history. From the 700-year old seat of justice at the Guildhall, to the noose that still hangs at the back of a Wapping pub, as well as the world’s smallest police station, the scenes of infamous murders and notorious felons’ favourite watering holes, the book guides readers to a host of locations from the capital’s rich history of law and order.  With three original walks and over 100 sights to see, this is a sightseeing guide for the intrepid traveller in the capital of crime.

Read extracts from the book:

Criminal London: A Sightseer’s Guide to the Capital of Crime is published on the 21st March by Aurum Press. We have three copies to give away to CRA readers – just sign up to our newsletter, or tweet/re-tweet us/share us on Facebook to enter. Closes 1 April.