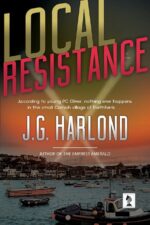 Do you actually know anyone who is entirely good? Or entirely bad, with no redeeming qualities?

I ask because as a crime writer I create both goodies and the baddies: those who do their very best in trying times (in this case World War Two), and those who prefer to make trouble or knowingly cause emotional pain, regardless.

The fact is, in my fairly long life I have met very few truly good or bad people. I worked in education for three decades, yet in all that time I only encountered four or so deviously malicious adolescents. Even the most unpleasant had a glimmer of decency in them – if you looked hard enough. The same goes for so-called ‘good people’; the saints among us are few and far between.

Knowing, or at least believing this, is at the back of my mind as I’m writing the Bob Robbins Home Front Mystery stories. Bob Robbins is a dumpy detective sergeant who has been called back into the police after retirement to replace a younger man who has joined up. (This really happened.) He is none too pleased about it, either. He was hoping to spend his golden years doing a spot of birdwatching on the Cornish coast, now he’s back to typing up endless reports and visiting mortuaries, which still give him the heebies. He knows Hitler is to blame, but grouses about it all the same. Bob is obviously a goodie at heart, but ‘grumpy old man’ sums him up nicely. He can be annoying, but I do have a chuckle at his expense while I’m writing, which may be why readers have taken to him and his somewhat haphazard investigating skills.

I wonder, though, if Bob’s growing popularity has something to do with the blur between right and wrong in the criminals he encounters. Some of his suspects (he’d laugh at ‘person of interest’) are pretty odd; certainly not your usual commonplace criminals anyway. In Bob’s first wartime case, Local Resistance, an entire village was up to no good. Think Foyle’s War meets Dad’s Army and Arsenic and Old Lace. In the second story, Private Lives, there are various people with deeply personal reasons for not behaving as they should. Two resort to murder, and poor old Bob gets caught up in their shenanigans, meeting a few of his own demons in the process. He’s saved, physically in this case, by his well-mannered young side-kick PC Laurie Oliver – who’s actually very bright. Bob secretly reckons Laurie will do very well for himself, once he stops growing.

In his third murder investigation, Courting Danger, Bob has to sift his way through the motives and alibis of Celtic folklorists, eccentric ageing sisters and race-horse fixers, while the whole area is heaving with GIs preparing for D-Day. It’s enough to try the patience of a saint, and Bob’s no saint. Far from it.

Creating characters who are trying to get on with their lives through the horrors of real events such as wartime means accepting the notion that a certain combination of circumstances could drive anyone to extremes. In these stories, the combined pressures of rationing, conscription, losing one’s home, losing a loved one, plus the persistent risk of losing one’s own life altogether lead some otherwise good people to step outside of the law. These were traumatic years, which ironically produced some classic film and radio humour. I defy anyone to listen to a recording of ITMA (It’s That Man Again – meaning Hitler) and not laugh out loud.

Perhaps grumpy Bob Robbins has touched a nerve because in these days of global pandemic and domestic stress our ideas of what constitutes being a law-abiding citizen have also become a bit fuzzy. And we need a bit of a giggle to lighten the strain.

You can find out more about JG Harlond and her books here.