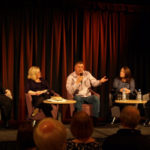 Pauline Rowson says, ‘CSI Gateshead was modelled on the CSI Portsmouth event with some slight variation. The Gateshead event took place over two hours on an evening with one panel of crime fiction authors and crime experts whereas CSI Portsmouth is a full day event with two panels of crime authors and crime experts. Both events are proving to be extremely popular with crime fiction fans and those who enjoy CSI programmes on the television.’

The event was superbly organised by Helen Eddon of Gateshead Library.