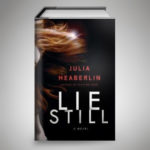 Lie Still is a potent blast of twenty first century Southern Gothic. Julia Heaberlin brings a poet’s craft and conviction to her storytelling, and the characters which populate her fictional Texan town of Clairmont pulse with believable emotions and jealousies.

When pregnant Emily Page and her husband Mike leave New York City, so Mike can take up his job as sheriff, they are looking forwards to building a new life together. But it soon becomes clear that Emily’s past is catching up with her. The victim of a brutal date rape when she was at college, Emily has struggled to rebuild her fragile confidence. Secrets are reaching boiling pointing under the brittle surface of her new Texan community. The well-bred ladies of the town compete to join Caroline Warwick’s club, but her vetting procedures and initiation ceremonies include the worst kinds of bullying. Instead of supporting each other, the women check out the success or failure of their acquaintances’ latest plastic surgery and the depth of their spray tans. Many of the women Emily meets are at cracking point, desperate to join Caroline’s clique and climb the social ladder. But when Caroline goes missing it emerges that she was a victim, as well as a bully. The anonymous phone calls and letters which Emily has received since she was raped reach a new level of intimidation, and she and her husband realise that her life is in danger. As Emily gets to know members of the Texan elite and tries to find out what has happened to Caroline, she sees that the events of her past are linked to Caroline’s fate. The story builds to an exciting crescendo as Emily traces Caroline’s roots back to a much less salubrious neighbourhood in Kentucky, and comes face to face with the nightmares which have haunted her for years.

Julia Heaberlin excels at depicting the characters and dialects of the Texan community where she grew up. She offers a wry spin on the culture depicted in the legendary soap opera, Dallas, through the eyes of a well-drawn New York outsider. One of the most compelling aspects of this novel is the social realism which lies just below the glitzy surface.  The book takes an unflinching look at sexual politics, and at a culture where an undergraduate who has just been date raped is told to go home and forget about it, because it can’t be proved. Heaberlin is also deft in showing us the vestiges of racism which exist in Clairmont, where Hispanic immigrants are rarely able to find well-paid employment or be welcomed as equals by their white neighbours.

Lie Still provides a pacey and convincing storyline, and the feisty character of Emily Page is appealing in her unwillingness to allow  herself to become a victim. But one of the great pleasures of this novel is the style and glitter of Heaberlin’s writing style. She has captured the raw and dangerous Texan sunshine and sprinkled it liberally across the pages of her highly accomplished second thriller.

LIE STILL, by Julia Heaberlin, Faber and Faber, £7.99, Publication due in July 2013, reviewed by Kate Rhodes