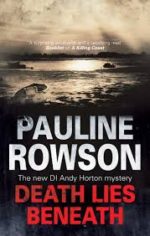 When ex con, Daryl Woodley is found dead on the marshes bordering Langstone Harbour the Intelligence Directorate believe his murder is linked to big time crook Marty Stapleton currently serving time in prison. DI Horton is not so sure. He attends Woodley’s funeral in the hope it will give them a lead in an investigation that has drawn a blank at every turn. It does but not in the way he or anyone expected. A body found on a rotting boat being salvaged in Portsmouth Harbour throws Horton into a complex and frustrating investigation. As the tension mounts to solve the case, Horton receives a chilling message; time, it seems, is also running out for him personally…

We have THREE copies of Death Lies Beneath to give away. ENTRY is simple and there are three ways to enter.

3.  Answer the Following Question “On which coast of England is Death Lies Beneath set?”  Clues here

You can enter once, twice or three times but you MUST comment below to let us know you have done so. The winners will be chosen and contacted next Friday, 7th March.