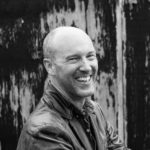 I wanted to write a crime novel set in Belgrade for a long time as it’s a fascinating city and perfect for Balkan Noir. I’ve also loved two Serbian women, my son is half Serbian and I lived in Belgrade in the late 90s.

Belgrade in the mid to late 90s was a crazy place. The war was over, the West had imposed sanctions and inflation was off the scale. The only economy which worked was the black-market and in this climate, crime thrived.

One of Serbia’s most famous criminals was Arkan, who gained world renown with his military unit Arkan’s Tigers. There’s an iconic photo of him holding a tiger cub, which was taken by an American photographer. When the same photographer published a photo of Arkan’s men killing civilians, Arkan reportedly said if he ever got hold of the photographer, he would drink his blood. But for many Serbians, Arkan was a national hero, standing up against the West. As he said during NATO bombing, he would no longer chew American chewing gum. He was also married to Serbia’s most famous pop star, Ceca. For five years, they were Belgrade’s glamour couple. Until Arkan was assassinated in 2000.

Belgrade has cleaned up a lot of crime since then. After the Prime Minister Zoran Đinđic was assassinated in 2003, Operation Sabre cracked down on the Zemun clan. And in recent years, the Balkan Warriors operation brought down the cocaine cartel. My idea was to write about a present-day investigation effected by past events.

Attending CrimeFest at Bristol, I pitched a different novel to three literary agents – a psychological thriller based on my ex-wife’s descent into paranoia. I could see the agents weren’t buying the idea, so I quickly switched to a new pitch: ‘a police inspector in Belgrade must fight corruption over the Balkan drug route to keep his family alive’. This immediately got the agents’ interest, so I could see I was on to something.

Around the same time, I met The Woman with a Bullet in her Leg. She was studying linguistics in the UK for a semester as a mature student and we met in a park where our sons were playing. We instantly fell in love and she told me her story: As a young woman in Belgrade in the 90s, she’d been the girlfriend of a drug dealer which ended with a police car chase and her getting shot in the leg. When doctors operated, they couldn’t remove the bullet. Needing to get out of the life, she moved to Austria where she got married and had a son.

Not long after meeting each other, I was awarded a Literature Wales Research Bursary. I wanted to use this bursary to interview a police inspector in Belgrade. With my girlfriend as my research assistant, we made enquiries. The first response of her family was to laugh – which Serbian police inspector would talk with some English writer? So I turned to an old friend of mine, the author and publisher Aleksandar Šurbatović. And he said, sure, he’d organise it through a friend of a friend.

So me and my research assistant flew over to Belgrade, staying with her family, who in typical Serbian fashion fed me until I couldn’t eat any more. In Serbia, people say ‘polako, polako’, which means ‘slowly, slowly.’ It’s what I say to my son when I want him to keep calm. When we met Aleksandar, he said we’d have coffee first. Then he said we’d have to meet the police inspector later, so better to have lunch… Then he got a phone call, the three of us jumped in his old Yugo and he drove like a madman. We picked up his friend and waited in a café near police headquarters.

A young police inspector turned up. At first, he was understandably reluctant to talk. But with my friend and girlfriend acting as translators, he opened up, telling me about the Balkan drug route, corruption and recent arrests. The Balkan drug route starts in Afghanistan, where poppies are cultivated into heroin, is transported through the Balkans and finishes in western European countries such as Germany and the UK. The Balkans is the transit route. It’s the West which consumes.

One thing I was really pleased to find out was that heroin is sometimes transported in ajvar. Ajvar is a Serbian relish made from red peppers, one of the most delicious things in the world. I’d imagined heroin was hidden in jars of ajvar and it turned out to be true.

Armed with a full notebook, I headed back to the UK, where I carried on writing and researching. During my research, I came across a Serbian documentary called See You in the Obituary. This was made in 1994 / 95 and simply interviewed criminals to get their thoughts. By the time the documentary had finished being made, several of the interviewees had been killed. One of the few surviving criminals was a guy called Kristijan. In 2015, Kristijan was arrested for dealing heroin in Belgrade’s central church. In court, he claimed he didn’t have enough money to support his family. He was given a suspended sentence so that he could appear on reality TV programme The Farm. Surviving the past in this surreal fashion was what I wanted to capture in my writing.

I finished writing the novel and set about getting feedback before sending to literary agents. I initially had a very violent prologue, explicitly depicting the murder which sets up the story. This seemed to put some people off. I still like the scene, but ended up cutting it.

One literary agent gave me interesting feedback, emailing that she loved the concept and my writing but was put off by the sexualisation of every female character. I re-read the opening and it was true that the first thing I’d done for each female character was mention her breasts. Maybe I’d got into the world of Serbian criminals and their girlfriends too much. So I spent a day ‘de-boobing’.

While I was getting rejections, my girlfriend was back in Austria and letting the past back into her life. This was heart-breaking for both of us. But it is one thing to write about crime and another to be involved with it. A few months later, I got a call from a lawyer in Austria. My former researcher and girlfriend was in prison and could I help get her out. This was a crazy story involving tapped phone calls, a prostitute in witness protection and a prosecutor who had an accident on the day of the hearing. Out of love, I went over to Austria and helped get her out of prison. I also told her I was going to turn her life into a thriller called The Woman with a Bullet in her Leg.

Giving up on literary agents, I turned to independent publishers. Searching via the CWA website, I came across Fahrenheit Press and immediately thought they might be a good fit. They were focused on crime with a no-nonsense approach that was brash and professional. I penned an email I thought would catch the publisher’s attention and Chris McVeigh, the guy behind Fahrenheit emailed back – he loved the idea behind the novel and was really interested.

I met Chris in a pub in Camden,an old haunt from the 90s. I told him my story behind Balkan Noir and Chris had his own story – having come down from Scotland as a young man with just ten pounds in his pocket before making his money through publisher search engines. Two pints and two hours later, we shook on a publishing deal.

The Balkan Route is now out – http://amzn.to/2zfl3Zp – the first in a series of Balkan Noir novels. I’ve finished writing The Woman with a Bullet in her Leg and am in the middle of writing The Clan, which chronicles the rise and crackdown of Serbian clans in the 90s…

Find out more about Cal here.