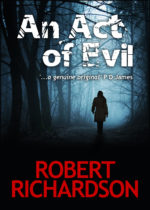 An Act of Evil: Robert Richardson

In a new feature every other Tuesday the CRA will be focusing on books from new sponsors ‘Endeavour Press Ltd’.

First up is ‘An Act of Evil’ by Robert Richardson.

When a rare, misprinted edition of a sixteenth-century Bible is stolen from Vercaster Cathedral, Augustus Maltravers, a visiting playwright and the irreverent brother-in-law of Canon Cowan, sees the theft as nothing more than an amusing distraction.  But the matter turns more serious when his close friend, Diana Porter, is discovered missing from the Dean’s garden party.

Diana is a talented and beautiful London actress – but also a woman who has recently been involved in controversial publicity.  As the police launch a nationwide hunt, her severed hand is found nailed to a front door.
The search for Diana escalates into a murder hunt.  Consumed with fears for Diana’s safety, Maltravers cannot stop thinking there could be a bizarre connection with the stolen Bible.

With his partner, Tess Davy, he starts asking his own questions, but finds no answers. As the festival continues with the staging of ancient Mystery Plays, his anguish mounts until a chance remark leads him to a horrifying explanation for Diana’s disappearance.  And Maltravers is about to discover that a single ‘Act of Evil’ can have terrifying consequences.

Next weeks ‘Read of the Week’ is a free short story by Len Tyler.