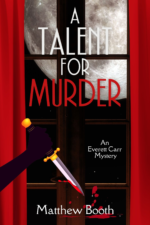 A Talent for Murder by Matthew Booth

It has been a long time coming.

Since I first encountered Sherlock Holmes when I was 11 years old, I wanted to write crime and detective stories and, over the years, I wrote several crime novels (unpublished) and even more short stories (published) in the same vein, but I was never really comfortable with them. I could never settle on whether I wanted to write traditional murder mysteries or gritty, contemporary crime novels. For too long I prevaricated over what it was I should be writing and, naturally, I got nowhere. “I’m a writer,” I would say. “Oh, can I buy one of your books?” would be the reply. “Er… no.” After a while, it became dispiriting and, of all things, it took the first lockdown for me to buckle down.

I used to say I had only a limited time to write, having a full-time job and an associated lengthy commute, but suddenly I found myself working from home and the commute wasn’t a factor anymore. So, just like that, I had much more time on my hands and no more excuses not to write that book I kept talking about and, more importantly, get it published. I decided that this was my last attempt to get going as a writer and that I would regret it if I didn’t grasp this bizarre gift of time by the throat. Crucially, I decided that it would be best if I decided once and for all precisely what I wanted to write. After some soul-searching, I admitted to myself that what I liked most about this fabulous genre was a murder in a country house, with a closed community of suspects, each with motives and secrets, and a complex puzzle at its heart. After all, I was a huge admirer of Christie, Sayers, and the Golden Age gang.

And so, I set about writing my version of a Golden Age detective story.

One thing I had in my mind from the start was the (sometimes unfair, in my view) criticism of this type of story that the characters are cardboard. I was determined that the suspects in my book would be real people, with feelings and emotions, and they would be affected by the violent act of murder. Justice would be done, but life for the people concerned would never quite be the same again. I wanted the characters’ lives to carry on after the last page had been turned. It was something I felt the marvellous P.D. James had always done so successfully – her novels, despite their contemporary setting, were essentially Golden Age detective stories populated by real people. That was what I wanted to do, but with a crucial difference.

To me, it seemed incongruous to write one of these stories and set it in a contemporary setting. For one thing, the puzzle element in a realistic environment would seem artificial, whereas the nostalgia of the past might soften that blow. For another, I don’t understand the modern world at all. Forensics, CCTV, mobile phones, computers, social media, and so on are mysteries to me. I am far happier in the past – in fact, I miss the days before I was born. Similarly, I find technology can rob a detective of some of his/her glamour. What good would it be if Poirot could Google details of a past case? What good would it be if Holmes could call for back-up prior to facing a spectral hound?

No, my Golden Age story would be set in the Golden Age itself, where it belonged, and my detective would be an amateur sleuth, something else which I felt a contemporary setting would make difficult. I wanted him to be kind, compassionate, and cautiously optimistic, albeit someone with a tragic past. To be honest, I had grown tired of semi-alcoholic, divorced, maverick DIs, who are one step away from the villains they catch, and who have a problem with authority.

After a bit of tinkering about, I created Everett Carr, a criminal judge forced into retirement when his wife is murdered in a failed assassination attempt on Carr himself. For his part, Carr is left with a piece of shrapnel in his knee, which not only renders him lame and in need of a walking stick, but also serves as a constant, physical reminder that his wife died in his place. His pain is therefore both physical and mental. The use of the name Carr was, of course, deliberate. He is named after John Dickson Carr, the Golden Age great, and it seemed fitting to do that, given that the story I was plotting had developed into a locked-room mystery, of which Dickson Carr was king.

All of this resulted in A Talent for Murder, the first Everett Carr mystery. Set in a country house in the English village of Vale Thorn, the book concerns Sir James Ravenwood, a collector of macabre artefacts and an expert in the occult, who is hosting a weekend party at his country house, Warlock’s Gate. The party is a celebration of the unveiling of Ravenwood’s latest treasure – a ceremonial dagger said once to have slain a vampire. Amongst the invited guests is a rival collector, Sebastian Lynch, who has been receiving strange threats against his life, in the shape of wooden dolls with skulls for faces and twine nooses tied around their necks. On the night before the unveiling of the dagger, Lynch is stabbed to death in Ravenwood’s private museum, despite the fact that the doors and the windows to the museum are all locked, the only keys have been stolen, and the house itself has been secured. Carr himself is a guest and, treated by the police as a suspect, he instigates his own investigation. When the killer strikes for a second time, Carr finds himself in a race against time to prove his theories and unmask the killer.

I’d like to think that Christie, Sayers, and the Golden Age gang would approve.

A Talent for Murder is published by Level Best Books  and is available in paperback and e-book. You can read more about Matthew Booth and his books here.