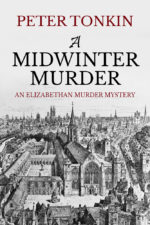 A Midwinter Murder by Peter Tonkin

In a new feature every other Tuesday the CRA will be focusing on books from new sponsors Endeavour Press Ltd.

A Midwinter Murder by Peter Tonkin

Tom is called away from the dress rehearsal of ‘A Midsummer Night’s Dream’ to receive terrible news: his brother John has been found dead, frozen with terror in the branches of a tree.

Rumour has it that the Barguest, a mythical monstrous hound, is loose on the Scottish Borders . . .

Tom rides north to investigate – only to find himself embroiled in a dark, deadly political conspiracy, where even his swordsmanship and logic may not help him…

Can Tom solve the mystery of his brother’s death?

Or is there more than meets the eye to this Midwinter Murder?

“Riveting tale full of fast action” Publishers Weekly on ‘The Point of Death’.

Peter Tonkin was born in Northern Ireland, and was raised in the UK, Holland, Germany, and the Persian Gulf. He has written thirty novels including ‘The Point of Death’ and ‘The Coffin Ship’.