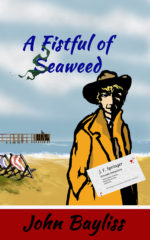 A Fistful of Seaweed – John Bayliss

‘I groaned out loud. I was never going to get my wallet back, Ackerman wasn’t going to get his photograph back and, as a reward, he was going to boil my bones down to glue. My destiny was to hold up the wallpaper in his sitting room.’

In October 1962 : dark mushroom clouds may be looming for the world, but for J. F. Springer things are looking brighter. He has a potentially lucrative job looking for a missing schoolgirl. The good news is that his client, Ackerman, is one of the biggest businessmen in Westerby-on-Sea; the bad news is that he is also one of the biggest gangsters in Westerby-on-Sea. Still, all looks straightforward – but not for long. Doubts arise as to whether the girl even exists, or if she is in fact someone else entirely. Add to the mix his old foe Inspector Willis, Jim Tarbet and his current career as brothel-keeper with a string of foreign girls, a space age religious cult operating out of an old cinema, another (or possibly the only) daughter of his client and  Ackerman’s underworld rival in Westerby, and soon Springer is entangled in yet another confusing and unexpectedly dangerous case. Then there’s the body of an unknown man, found tangled in the pillars of Westerby’s historic pier…

Before long J. F. Springer begins to wonder if J. F. Kennedy doesn’t have it easy…

The second hilarious adventure for Springer, as he tries to emulate Philip Marlowe on the mean (well, they tend to be mean to him) streets of sleepy Westerby-on-Sea.