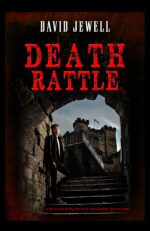 So it’s finally out and in print. Death Rattle. The debut novel of a new and nervous crime writing author.

So what happens now?  Well… Next come the reviews.

I begin to feel like the writer of a new play standing in the wings at the theatre trying to gauge the audience reaction. Will they like it or will they loath it? Will they be kind or should I, like the deranged Vincent Price in ‘Theatre of Blood’, consider embarking upon murderous revenge attacks on any harsh critics?

Critics should be wary that I had even considered that course of action. Don’t forget that as an ex-cop I do have some knowledge of forensics.

At first it seems all is going well, with John Cowton in No Quibble Scribble Book Reviews saying, ‘The best I’ve read this year’ and even an ex-Murder Squad chief praising the authenticity.

So far so good.  If everyone likes the writing and the realism I might be onto a winner. What could go wrong?

Then I find out.

I get a personal contact from a seventy-eight-year-old grandmother.

Apparently for her the book is too realistic when it comes to the use of language. The kind of profanity that trips off the tongues of real cops like a verbal Niagara Falls does not go down well with some of my more mature readers.

‘Is that really how policemen speak?’ I am asked in hushed tones.

‘Well… Actually, yes. I’m afraid when cops talk to each other they can be a little…vulgar. It’s not like on television.’  I could have added that television is often worse but I don’t wish to inflame an already awkward conversation.

After some chastisement on her part and not a little persuasion on mine, I think that I’ve managed to retain one of my readers, but it was a close call.

It set me wondering about other authors and how they approach the use of the sort of free-flowing bad language that has become the norm in today’s society.

The English novelist and poet Philip Larkin in his 1971 poem ‘This Be The Verse’ informed his readers that:

‘They f*** you up, your mum and dad.
They may not mean to, but they do.
They fill you with the faults they had
And add some extra, just for you.’

If it was all right for a respected Oxford University graduate in a seventies poem, then surely fifty years later such language should be all right in a modern contemporary crime novel? After all, one of the hooks for my novel is the realism and adherence to police procedure. If I insist on getting procedure right, then why not the language?

But it’s too late. Doubts are already creeping into my brain.

I am left pondering whether I should have toned down the swear words in my book a little…for the more mature readers who prefer their Miss Marple to their Dirty Harry. Do I make the characters less true to life; sanitise their speech to avoid offence?

Then again there is the other side of the argument. Have I a responsibility as a writer to portray cops as they really are?  ‘Warts and all,’ as Cromwell said.

A balance between realism and the risk of alienating some of my more genteel readers.

I’m sure it is a conundrum and a challenge for most writers of contemporary fiction.

I recall a conversation that I had with my good friend the horror writer Stephen Laws who had sent a copy of his latest scary novel to his own personal hero, the late great Peter Cushing, star of so many Hammer Horror classics. Stephen had dedicated his first book to Peter Cushing in appreciation of his work in the horror genre and they had become correspondents.

The new novel The Frighteners was set in a men’s prison and contained the language that inmates in such a facility were likely to use.

Although Cushing said that he had enjoyed the book, he had gently chastised Stephen for his use of what the actor considered to be ‘bad language’.

While Stephen explained that the book was set in a prison and the characters used contemporary language so as to realistically portray the scenarios, it was to no avail. Regarding certain words Cushing could be quite old fashioned.

The most gentlemanly of movie stars would not be shaken from his stance.

It seems like hammering stakes into vampire corpses and lopping people’s heads off was all right, but swearing…well, a writer can go just a little too far.

Death Rattle by David Jewell is available to download on kindle from Amazon and available in Hardback and Paperback from Amazon, retail outlets and from Wild Wolf Publishing. To find out more about David Jewell and his books visit his author profile page. 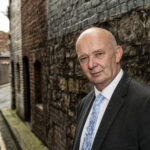