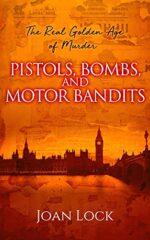 I wasn’t feeling like writing another book just now partly because I too often seem to choose a subject  needing a great deal of research but, despite not previously being attracted by the subject, I  became taken up with Martin Edwards’ recent book, The Golden Age of Murder.  (Being an ex-policewoman with a brother who was a Detective Chief Superintendent I had resisted the idea of detective novels in which the idiot police were outclassed by some aristocrat who had never done a day’s work and had no idea how the other half lived.) However, Martin’s book convinced me that the Golden Age novels had in fact been a comfort to a people recently overdosed on reality and that the novels were not all snobbery with violence. So I diverted to exploring just what murder was really like in the Twenties and Thirties.

I had written about the period previously but mainly from the view of the progress of Scotland Yard detectives. Delving deeper threw up many gripping murders, partly the result of the flourishing gun crime due to the firearms left over from the war. The victims ranged from Field Marshal Sir Henry Wilson wearing full regalia when he was shot dead on his doorstep in Belgravia as he returned from unveiling a war memorial, to a policeman shot whilst merely guarding a tennis clubhouse in Thames Ditton which had been plagued by petty pilfering.

Then there was the simmering background of civil unrest: communists attempting to stir up the masses; the suffragettes similarly with women; the blackshirts and the fascist movement; the coal miner leaders of  their overworked and underpaid brethren and the IRA doing the odd little crime here and there and attaching threatening notes  to the scene or the body while also attempting to set fire to a vast Thameside oil dump – meanwhile criminal  gangs were running riot in their fast cars and the police, meant to be stopping them, had no cars with which to do so.

Scotland Yard had tried to keep an eye on the newly dubbed Motor Bandits by cutting holes in the  canvas sides of a horse-drawn old railway van operated by twelve detectives who knew lots of criminals and were given a roving commission to track them down.  This was fairly successful but they needed speed.  So two motorised ex-RAF lorries were bought and this began to lead to street battles with the thieves causing an excited Press man to christen them the Flying Squad.  A bit of overkill there perhaps, particularly since to contact the Yard they still had to stop at a phone box and ring in.  But they gradually became more up to date with a roof aerial and Morse code operators on board; then telegraphy and better vehicles with more speed.

I decided to include the Golden Age detective novelists, such as Agatha Christie, as they appeared noting how they were presented and greeted at the time. One of them (Anthony Berkeley Cox) decided it would be amusing to make his gentleman detective not only charmless but rude and offensive and there were several light hearted attempts from others to bring about rules for detective novels such as ‘the culprit must not be a servant’  –  which would be too easy a solution because  – ‘the culprit must be a decidedly worthwhile person’.

I go on to describe more real life crimes aided by the autobiographies of Scotland Yard detectives which they continued to produce despite official warnings about giving away police secrets and the risks of being accused of libelling the people they described.  The murders certainly continued to offer an interesting window on the times.  There was the woman in Coventry who knowingly drank the poison she had intended for her husband; the dying Ramsgate shopkeeper who refused to reveal who had attacked her; the farmer shot dead in bed with his own double-barrelled shotgun by the stone-deaf handyman he had sacked who was unaware that he intended to rehire him; the actor in Reading performing his way out of a murder charge and two of London Zoo’s elephant trainers who had a lethal disagreement over working arrangements. Then, drawing the Golden era to a dreadful close, the IRA bombing of Britain in the late Thirties.

The background poses and answers several questions:  Why did Scotland Yard become so well known world-wide when they were tardy about making some procedural improvements?  Why the increasing habit of murderers leaving women’s bodies in suitcases? Which officer could identify certain fingerprints on sight? And what was it, in the early Twenties, that almost awarded British men a licence to kill?

You can read more about Joan Lock and her books here.