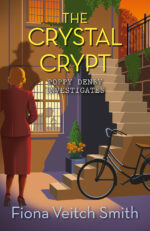 “Excuse me, miss. I think you’ve dropped something.” He held the camera under one arm like the bellows of a bag pipe, while with the other he thrust something in her direction. A book. The one she had been reading on the train.

She took it from him, raising her eyes only enough to see he was in his late twenties and wearing a bowler hat.

When I first wrote this in 2015, I would have no idea that this chance meeting of reporter sleuth Poppy Denby and photographer Daniel Rokeby on Platform 1 of King’s Cross Station, would cause me such problems. The 28-year-old ex-serviceman who had been injured in the Great War, was to become the love of my young detective’s life, and the bane of mine.

Poppy is 22 when The Jazz Files, set in 1920, starts. Prime marriageable age in the period. Poppy wants to be married in the future, but she also wants to forge a career. So, from the very beginning of the series, a tension is established between the two great desires of Poppy’s heart. If Poppy does get married – to Daniel or someone else – where will this leave her career? Daniel is a widower, with two children, and Poppy wonders if she would be expected to stay home and look after them.  Who then would solve all the murders?

The conflict between the professional and domestic realms of women is one of the major themes of the series, but as an author, it is difficult to handle. For six books I have teased my readers – and my characters – with the on / off love affair of Poppy and Daniel. I once considered killing him off to get rid of the problem once and for all, but Poppy begged me not to. Instead, I sent him to the colonies for two years. But in book 6, The Crystal Crypt, he’s back. Now what am I going to do with him?

I take heart knowing that other authors have had the same struggles. Dorothy L Sayers managed to keep Peter and Harriet apart for seven books after they first meet in Strong Poison and eventually marry in Busman’s Holiday, thereafter becoming a sleuthing team. Will Poppy and Daniel do the same? Or will, as Poppy’s editor Rollo worries, the reporter sleuth’s wings be clipped?

Sayers worried that the independent female character she was creating in Harriet Vane, a mystery writer who did some sleuthing of her own, would become subsumed in the highly dominant character of Peter Wimsey. Harriet herself, who had already been burned by romance, was reluctant to fully merge her life with his. Would she just become Lady Wimsey? It is sometimes hard to establish independent agency in a female period character while remaining true to the period. Of course, Sayers wasn’t writing period fiction at the time; she was writing contemporary fiction, reflecting the reality of power dynamics between men and women in the 1930s.

This was a time when it was rare for women to be able to have a bank account or property in their own name. It was frowned upon for a woman to travel on her own (so essential for a lady detective!). It was a time in which women were legally barred from having jobs in certain professions, and in others, like teaching, were expected to resign if they got married.

This is something that I deal with in my Poppy Denby series. Although there was no marriage bar in journalism, and married women were able to work in the field, will Daniel allow her to? Perhaps before she has children of her own, but what of afterwards? Will Poppy herself want to carry on sleuthing when she has a baby?

From an author’s point of view, it is far easier to have a single female protagonist. Imagine if Miss Marple had a husband. Would he just be her poodle, like poor Richard to Hyacinth Bucket? But Miss Marple is of an age when readers don’t expect her to be involved in romantic relationships, so it is easier to handle. Not so the very eligible Miss Poppy Denby (whom, I must tell you, has even had marriage proposals from some of my readers).

Frances Brody, the author of the Kate Shackleton mysteries, set in the 1920s, manages to have a protagonist of marriageable age by making her (possibly!) a widow. In the first book of the series, Dying in the Wool, it is established that her husband never returned from the war, although his body was never found so he is only presumed dead. This is a clever device to keep readers hopes up that perhaps he might return in future books, and to give Kate a reason not to open herself to new romance (which might be fun at the time – for the readers and Kate – but would have repercussions on the rest of the series). However, there is still the opportunity for the odd frisson of attraction.

A quick aside here as we consider male protagonists like James Bond who are blissfully single, jumping from romance to romance. It is only in more recent years that this has become frowned upon. It is much harder to have a woman who is a sexual free agent in historical fiction while authentically keeping her within ‘decent’ society.

So, back to Poppy. There have been a number of fledgling or potential romances in the Poppy books, with men other than Daniel, as well as male characters trying to woo her. Poppy is aware of how attractive she can be to men and this is variably a help and hinderance in her investigations. If or when she gets married, how might that affect her sleuthing? Might she go undercover, pretending she is single? Or might she be open about her marital status? Or might she decide not to get married at all? These are questions I as an author have not yet answered. Poor Poppy, I’d better let her know…

You can read more about Fiona Veitch Smith and the Poppy Denby Investigates series here.