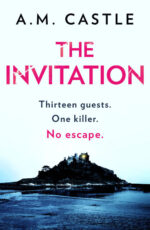 The Invitation by A.M. Castle

I have always wanted to write a closed circle murder mystery, so I suppose I’ve been lucky – the UK’s first lockdown gave me the means, motive and opportunity to get on and do it.

The closed circle is a less stringent variation of the locked room mystery ­– the sort of second-cousin-once-removed who’d pop up in a Golden Age denouement. Instead of the four walls of, say, The Moonstone by Wilkie Collins, the criminal roams within a country house (for example, Death and the Dancing Footman by Ngaio Marsh), or sometimes on a train or plane (Murder on the Orient Express, Death in The Clouds by Agatha Christie). The key is not the largely mechanical puzzle of how they got in or out, but the far more chilling question – who is the killer in our midst?

Last March, right across the country, we all found ourselves stuck indoors, cheek by jowl with our own particular cast of ‘usual suspects’.  I was writing a novel about coercive control, but with rates of domestic violence rising everywhere, it became too much. I needed to break free – in my imagination at least. So, on one of my one-hour walks, I asked myself where I’d like to be. Beside the seaside, beside the sea, was the answer. And suddenly there, with a tiddly-om-pom-pom, was the plot of my latest novel, The Invitation.

There’s something about wide beaches and rolling waves that seemed wonderfully far from downtown Lewisham. I love south London, most of my books are set in its cruel cul de sacs, but I wanted that tang of salt in the air. The book is still a lockdown – the thirteen suspects, gathering for an ill-fated Halloween party, become marooned on an island. It’s inspired by St Michael’s Mount in Cornwall. There couldn’t be a more perfect place to murder people. I googled it nervously and, to my delight, not one murder mystery has been set there before. Clearly I had to rectify this glaring omission.

The Invitation is in the tradition of tense island thrillers like Agatha Christie’s And Then There Were None (the best-selling crime novel of all time, according to the Agatha Christie Estate) and PD James’s The Lighthouse.

In these times of understandable strain and worry, who amongst us has not thought, perhaps playfully, of bumping off that annoying someone in their own closed circle? Hopefully books like The Invitation will prove a distraction, with finding the murderer a safe displacement activity. I know it was for me.

The Invitation by A.M. Castle was  published by HQDigital on 26 March.