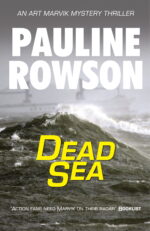 ‘The Challenges of Writing a Series’ by Pauline Rowson

Dead Sea, number four in the Marvik mystery thriller series, was a difficult book to write, not because there was any lack of ideas for the storyline but because it needed to pick up the threads of an ongoing mystery which runs through the first three Marvik novels, that of the deaths of Marvik’s parents in 1997, killed in an underwater tremor while diving off the Straits of Malacca.

Dead Sea is the story of what really happened to Professor Dan Coulter, a renowned oceanographer and Dr Eerika Marvik an equally renowned marine archaeologist. Hints are given in the first three novels, Silent Running, Dangerous Cargo and Lost Voyage, along with Marvik’s back story and his emotions surrounding his parents’ deaths when he was seventeen. These all need to be weaved into the new novel in a way that doesn’t completely dump on the reader and turn him/her off but gives enough explanation and colour as to keep both series readers and new readers gripped.

Each Marvik mystery is a new story with undercover agent Art Marvik working for the UK Police National Intelligence Marine Squad, helping to solve marine related crimes that have their roots in the past. Marvik’s boss, Detective Chief Superintendent Crowder, supplies Marvik with the barest details needed on each investigation because Marvik’s remit is to go into the case cold, ask questions, stir up feelings, prompt danger and risk his life in order to expose killers. It is what Marvik is good at, facing threats, he’s done it time and again while on missions for the Royal Marines as a Special Boat Services Officer.

After Silent Running which introduces Marvik and his former Royal Marine colleague, computer expert Shaun Strathen, Marvik is engaged, along with Strathen on their second mission, Dangerous Cargo, which takes Marvik to the coastal town of Swanage in Dorset to uncover the truth behind a fifty year old murder. When an innocent woman is killed during the course of the investigation, Marvik realizes that the stakes are much higher than he’d previously thought. It is this murder in Dangerous Cargo, that of marine archaeologist, Sarah Redburn, which is a key element in Dead Sea. But before that novel, Marvik embarks on a third investigation in Lost Voyage when Detective Chief Superintendent Crowder, asks Marvik to investigate the disappearance of a salvage vessel, the Mary Jo, which went missing in mysterious circumstances in 2003. More snippets from Marvik’s past and that of his parents are revealed.

To return to Dangerous Cargo though, not only is Sarah Redburn killed but Marvik also discovers a three-and-a-half inch floppy disk in her belongings with his late father’s handwriting on it. He postpones the questions surrounding its contents and why Sarah should have it and places it in his safe deposit box in his London bank putting off asking Strathen to open it on one of his old hard drives and reveal its contents. When a month later in Dead Sea Marvik goes to retrieve the disk he finds it missing. Now its theft indicates that Sarah was killed because of its highly toxic contents. Convinced it holds the key to the truth behind the deaths of his parents, Marvik, with Strathen’s aid, sets out to track down the thief which leads them following a trail of abduction and murder.

Dead Sea picks up the threads weaved into the first three Marvik novels, unravels the mystery, reveals Marvik’s emotional journey while at the same time (hopefully) being intriguing enough to keep the reader hooked!

You can find out more about Pauline Rowson and her books, including Dead Sea, here.