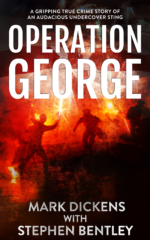 ‘The C Change in Undercover Policing’ by Stephen Bentley

Having now written two non-fiction and several fiction books about undercover cops, I know a thing or two about authenticity when writing fiction involving characters who are undercover police officers. The world of undercover policing has changed drastically over the years.

The C in ‘C Change’ refers to Code C of the Police and Criminal Evidence Act 1984 (PACE). It is the code that deals with the police and other law enforcement agencies questioning suspects. Owing to crime fiction books, television and other media, most people are aware an officer must caution a suspect before they are questioned. That’s fine if the officer is in uniform or has identified him or herself as a police officer. But what if that officer is an undercover officer – a UCO?

In those circumstances no direct questioning is permitted but understandably that officer does not have to reveal his real identity. Covert recordings captured by UCOs may be admissible in a court of law, but that officer knows full well he or she must be careful not to ask direct questions about any crimes. Code C is perhaps the biggest ‘C Change’ affecting undercover officers deployed to infiltrate organised crime groups. I operated undercover in the 1970s on Operation Julie.  PACE did not exist, and the much-maligned Judges Rules governed the admissibility of evidence.

RIPA, and I’m not fussed if that’s pronounced ‘ripper’ or ‘reaper’, also didn’t exist in my undercover days. Friendly cooperation between a police officer and a GPO telephone exchange employee enabled most telephone taps, Now, the Regulation of Investigatory Powers Act 2000 (RIPA) regulates the way certain public bodies may conduct surveillance and access a person’s electronic communications. The Act, amongst other things, regulates the use of covert human intelligence sources (CHIS) including informants and undercover officers, and intrusive electronic surveillance.

Having recently co-authored Operation George with a former undercover officer from a more modern era than me, I was struck by the sheer professionalism of the new undercover officers dealing with all the nuances of the law’s requirements and yet still effectively infiltrating gangs of dangerous criminals. I was also impressed by their training which didn’t exist in my day; the backup they receive both physically on deployment and constant assessment to care for their mental health which also did not exist in my day.

However, despite all this regulation of covert policing, it must be arguable that the Covert Human Intelligence Sources (Criminal Conduct) Act 2021 is a backward step in making covert activities acceptable and accountable. It is an Act that supplements RIPA and the government stated that the act was drafted in response to a court ruling in December 2019 which permitted, in a marginal decision, MI5 and other agencies to commit crimes to prevent more serious crimes from occurring. The Guardian [i] reported: “MI5’s partially secret policy allowing agents and informants to participate in serious crimes is lawful, judges have ruled by a three-to-two majority.

In a 56-page judgment, the investigatory powers tribunal (IPT), which hears legal complaints about the intelligence agencies, declared that the guidelines do not breach human rights or grant absolute immunity to those who commit offences such as murder or torture.”

This is a far cry from the previous agent provocateur doctrine so well-known by undercover officers in my day and the new breed of UCOs. I must say though, it would probably have sanctioned my use of cannabis and the occasional lines of cocaine when I was undercover on Operation Julie infiltrating a worldwide drug ring. Those Life on Mars days have long gone. What of the future?

One of the greatest challenges in co-writing Operation George, set in the late 90s through to 2001, was setting boundaries for what we could reveal in the book. Although much of the source material was in the public domain via the law reports and the Rosemary Nelson Public Inquiry, the personal involvement of Mark Dickens (a pseudonym) was not. It was through him we were able to add the fascinating details of the audacious and successful undercover sting from the perspective of an experience undercover officer. In the writing process the question was raised as to whether our tale could be useful to organised crime gangs. We concluded that it wouldn’t because times change, and undercover policing has become more sophisticated in many ways. The methods have evolved to stay one step ahead of the criminals. Proof of that is demonstrated by a recent highly publicised bust involving the county lines drug gangs. It was successful because technology was used to decipher the contents of pay-as-you-go phones used by the bosses and lower echelons of the gang. It led to seizures of large quantities of cash and drugs. There was no human intervention by way of undercover officers.

Is that the future? I believe it is and the human input in this area will diminish over time. The current Director of GCHQ recently made a similar point when discussing ‘smart cities.’ They exist now in part, so I am told. According to one source, a smart city is a technologically modern urban area that uses different types of electronic methods, voice activation methods and sensors to collect specific data. Information gained from that data is used to manage assets, resources and services efficiently. However, will that technology and data mining involve discovering the innermost secrets of organised crime groups? I say, why not? And besides, it’s all great material for any of you who wish to write futuristic crime fiction.

Operation George: A Gripping True Crime Story of an Audacious Undercover Sting by Stephen Bentley and Mark Dickens is out now.

You can read more about Stephen Bentley and his books here.