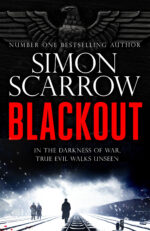 “Not so much Dun-Roamin’ as having discovered a whole new genre to roam.” – by Simon Scarrow

I was on a panel of ‘Roman’ writers at a festival in Harrogate some years ago when a member of the audience asked us if we’d ever contemplate writing outside that historical period. I was quite surprised to hear most of the other panelists say that they had no plans for writing anything else.

I had already written a four-part series on Wellington and Napoleon and a novel about the siege of Malta in 1565 at that time and I had plenty of plans for projects set in other eras. While I certainly have a passion for Roman history, my greater passion is for wider history. There are far too many interesting periods in history to write about and I could not imagine confining myself to just writing about Rome, no matter how much fun it is to be in the company of Macro and Cato, my protagonists.

The inspiration for the project that has now become a series of crime novels set during World War 2 was a visit to Alderney. During the war the island was the site of a concentration camp and I had an idea for a crime novel set there. That begged the question of what misdemeanour a criminal investigator would have to commit in order to be sent to Alderney. Tracking the protagonist’s career back to Berlin I began to research the city and came across a reference to a series of crimes that took place in the winter of 1940 – 1941. I was intrigued, but decided that the bitter winter of the previous year would make a better setting. In addition, at that stage most Germans were convinced the war was as good as over since Poland, the casus belli, had been crushed. After that, it was a question of fleshing out the characters and events of the first novel.

It’s been an interesting change of scene to write about and being a crime novel – rather than an action adventure – meant that I had to deal with a far more intricate plot and sometimes it was a challenge to keep track of who knew what and when, and how that impacted on the knowledge and actions of other characters.

Then there was the question of writing about a period of history that has been heavily documented. As a writer of historical fiction, I feel that it is important to get the facts right as far as possible, and if there is any deviation from the historical record then that needs owning up to in the author’s note at the end. Moreover, I was writing about a specific culture and many of the social customs of German society still pertain today so it was vital that the book ‘felt’ German without resorting to the literary equivalent of the thick accents and clicking-heels of so many cinematic representations of the era.

One of the inevitable aspects of writing about a distant (relatively) historical setting is the way that history seems to repeat itself in many respects. While avoiding anachronisms as much as possible it is interesting to highlight those patterns and indirectly question what is happening in the present and possibly drawing lessons from it. To reframe a popular aphorism, those who do not learn from history are doomed to be led by those who wish to repeat it. That certainly seems to be the way with the currents of increasingly extremist populism that we are seeing in the world today. In that sense, I hope Blackout and the novels that follow it will be read as much for the warning they offer as for the tense excitement and entertainment they provide. I certainly got carried away by the pace of the tale as I was writing the novel. And I felt the menace of the enforced darkness of the blackout as well as the menace of the oppressive regime Criminal Inspector Schenke has to work within. I dare say many of my readers will feel the same way…

Although I have already co-written a crime thriller (Playing With Death), authored by myself and a former student of mine, was perhaps too forward looking and too close to the knuckle for the novel’s own good. The readers’ reaction was very positive, but the publisher struggled to find a way to market it adequately and so I was disappointed by the level of sales it achieved), Blackout is my first solo effort. I am delighted by the overwhelmingly positive response from those who have read it in advance of publication, and by the wonderful plaudits it has won from writers who are household names. I hope that when the novel goes on sale that the wider crime and history readership feels the same way.

Meanwhile, I am hard at work on the next Roman novel, which features a strong crime-based narrative set in ancient Londinium. I’m not sure how much of a coincidence that is, or whether I have been bitten by the crime-writer’s bug. Either way, there will plenty of adventures for Macro and Cato as well as Criminal Inspector Schenke in the years to come!

Read more about Simon and his books here.