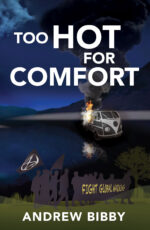 ‘Doing the homework’ by Andrew Bibby

You mean, you do research for your novels?

I understand very well why some readers may pose this question. Non-fiction books, fairly obviously, need to be carefully researched.  Nobody, I’m sure, would have been surprised that my last non-fiction book Back Roads through Middle England (a book primarily about English landscapes and why they look as they do) included a bibliography at the end, explaining where all the assertions I’d made in the text had come from. (They’d come, in many instances, from days spent in the British Library as well as from numerous forays on the internet.)

But contemporary novels surely are different?  Don’t you just need to sit at your desk, think up some plausible characters and a strong plot line and then simply knuckle down to doing the writing?

Actually, no. Of course it’s true that novels don’t come complete with footnotes or bibliographies. But please don’t think that this means that writers don’t do research.

My forthcoming novel Too Hot for Comfort (published October 1st) is set in the Lake District. Joan Arkle, a tireless climate change activist, has taken her campervan there, to be able to live among the hills she loves. She’s a wildlife photographer, but she is also a passionate campaigner against global warming. And, because of her activism, her time in Cumbria proves challenging. Somehow her activities attract hostility. Increasingly she makes enemies. And then, one evening on a quiet by-road, her campervan is firebombed.

Fortunately I know the locations in the Lake District where I have set Too Hot for Comfort pretty well. Nevertheless I still found it necessary to make a 240 mile round trip the other week from my home in Yorkshire to Keswick, just before the final text was signed off ready for typesetting, to make absolutely sure that I had a minor detail right. On the same trip I checked that the old fashioned AA box which has survived in the lay-by at Dunmail Raise south of Keswick, where I arrange for Joan Arkle to meet another character Nick Potterton, hadn’t been removed in the past few weeks.  What a relief: it was still there.

There are two characters in my novel who find themselves teasing out the story behind the firebombing of the campervan. Nick Potterton is one of them.  He was once a Sunday Times investigative journalist who now – following a messy separation – has retreated licking his wounds to the Lakes, where he does poorly paid freelance stints for the local Cumbrian Enquirer. Having a journalist involved in the story is useful: Nick needs to track down the facts for the news pages, and just occasionally I can progress the plot by simply focusing on Nick’s own thought processes and his completed articles. My own background is as a freelance journalist, so I feel I know Nick’s world well. That’s a real help.

The other character who is investigating Joan Arkle’s fate is a young woman detective inspector, DI Chrissy Chambers, newly qualified and now given the charge of leading her first investigation. Here I can’t rely on my own experience.  Like other novelists I’m enormously grateful for the help offered by those who do work in the police and criminal justice world and, through a friend of a friend, I was able a few months ago to have a lengthy chat over lunch with a woman DCI not very many years older that my fictional DI Chambers. She put me right on, among other things, police access to mobile phone and social media information. She also very kindly later read some of the relevant parts of the text and told me where I’d got things a little wrong.

A friend who works for the CPS and another friend who has recently retired as a JP shared their Magistrates Court experiences (I needed to know exactly would be likely to happen when Joan Arkle wears a T-shirt in court which is considered offensive by the bench). I followed up these discussions with a couple of visits myself to local Magistrates Courts where I sat in the public area – and found myself mistaken for a potential JP recruit. (I chose not to reveal my real reason for being there.)

Maybe this sort of research into police and legal procedures is exactly what you’d imagine I would need to have done. But, just to make the point, Too Hot for Comfort has also required me to track down seemingly random material: studies of upland hill farming, the history of the Celtic language once spoken in Cumbria, veganism, Catalan nationalism (yes, really), a Lake District wild swimming and fell running challenge known as the Frog Graham, what you’d see at a Black Grouse lek (the birds’ astonishing courting display) and – more obviously, given my theme – reports from the UN’s Intergovernmental Panel on Climate Change.

So this novel-writing game isn’t just about the snappy dialogue and the carefully worked-out plotting. I have homework to do. Does this mean that, having done the research, I can relax, secure in the knowledge that every detail in Too Hot for Comfort is absolutely correct?  Not a bit of it. However carefully you check through your work, again and again and again, there inevitably seems to be at least one little mistake that somehow slips through the net.  And that, perhaps, is where our readers have a role to play…

Andrew Bibby’s background is as a freelance journalist, whose work has appeared in a range of newspapers and magazines from The Financial Times to Mother & Baby. He lives in Hebden Bridge in the heart of the Pennines. Too Hot for Comfort is published (October 1) by Gritstone Publishing, £8.99.

You can find out more about Andrew Bibby here.