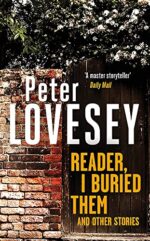 Many stories ago, I found a second-hand book published in 1947 called The Queen’s Awards. It contained the winning short fiction in a competition organised by the two American mystery writers, Frederic Dannay and Manfred B. Lee, who used the pen-name Ellery Queen. The book was gold dust to any aspiring author because not only did it have good examples of fine writing by such masters as John Dickson Carr, Leslie Charteris, Edmund Crispin, and Michael Innes, but each had an afterword by Ellery Queen analysing the stories, showing how they were constructed and why they worked so well. For me, this was like being shown the secrets of the world’s greatest magicians.

By 1973 I had published four crime novels and I thought I was ready to try a short story. Using lessons learned from The Queen’s Awards, I wrote ‘The Bathroom’, and sent it off to Ellery Queen’s Mystery Magazine. Back came a rejection letter. I hadn’t paid enough attention to the lessons.
But I persisted. Six years passed before the magazine accepted one of my stories. Then they published several. They even put a photo of me on the cover.

Then I did something that makes me cringe when I think of it. I re-submitted ‘The Bathroom’ to Ellery Queen. Now they knew my name, I told myself, they might reconsider my story. Or maybe they had forgotten it was ever on their slush pile.

I heard nothing back.

Not long after, I attended a mystery writers’ conference in Stockholm and I was mortified to find that one of the delegates was one half of Ellery Queen, Fred Dannay. I spent much of my time trying to avoid him. He was bald, with a beard and dark-rimmed glasses and should have been easy to spot, but he was also a small man who sometimes wasn’t visible behind someone larger. I managed to keep out of his way for a couple of days before fate intervened. I hurried into a lift as the doors were closing and found myself face to face with Mr Dannay and his wife Rose. The doors closed behind me. No escape, and I was wearing my name-tag. I smiled politely and nodded and tried not to look as troubled as I felt. He leaned forward and looked at the label. ‘Peter Lovesey. I know your name.’

Top of your blacklist, I thought.

‘We published some of your stories.’

I forget what I replied. I expected him to tell me it was unforgivable to re-submit a rejected story.

His eyes twinkled and he said, ‘Keep them coming, won’t you?’ Then the doors opened and he and Rose stepped out. I’m sure he knew.

Shortly after I got home, a letter arrived from Ellery Queen accepting ‘The Bathroom’. It was published, but with a different title. And next time I was in New York, I was invited to a photo-shoot for another cover picture, this time with the eminent novelist and critic, Julian Symons.

Growing in confidence, I started being more inventive. I set myself the challenge of writing a story in which the reader is the killer. I’d heard of whodunnits and whydunnits, but how about a youdunnit? This wouldn’t work in a full-length book, but it might be manageable in a short story. I wasn’t high on drugs when I wrote it, I promise you. ‘Youdunnit’ was duly submitted and published and I thought no more about it until a letter arrived from a French professor. He had been giving a lecture at the Sorbonne and made reference to OULIPO, Ouvroir de Littérature Potentielle (Workshop for Potential Fiction), founded by a group of serious-minded European mathematicians, poets and novelists, among them Italo Calvino, Raymond Queneau and Umberto Eco, the writer of the best-selling The Name of the Rose. One of their avowed aims was to study the rules and constraints of writing and examine the ways creativity flourished within them. But one great challenge remained. Eco himself had written in Reflections on The Name of the Rose (1983),

‘It seems that the Parisian OULIPO group has recently constructed a matrix of all possible murder story situations and has found that there is still to be written a book in which the murderer is the reader.’

When Professor Gallix quoted this in his lecture, up popped a graduate student – there’s always one – with the information that a British writer had published a story called ‘Youdunnit’. The news was treated in France as if I’d discovered a new law of physics. I was invited to the Sorbonne to meet the professor and his student Delphine and take part in a debate with a Dr Max Dorra, who had been inspired to write his own ‘youdunnit’. I should have been terrified, but it was too much fun to turn down.

In Paris I was treated royally and shown around the BILIPO, the amazing library of crime fiction in the Latin Quarter. My wife and I were taken to dinner by Francois Gallix and welcomed into Delphine’s home.

Somehow, I survived the Sorbonne debate by offering to write a second story, ‘Murdering Max’, in which I killed my upstart rival, Dr Dorra, and disposed of his body behind some sliding shelves in the BILIPO. I look back on the episode as surreal, but if I want proof that it happened (the debate, not the murder), it is all in print in a scholarly book by François Gallix entitled Crime Fictions: Subverted Codes and New Structures. You never know where a short story will lead you.

Reader, I buried them

More than a hundred stories into my career, I am in print again this month with my sixth collection, Reader, I Buried Them and other stories. ‘The Bathroom’ is one of those ‘other stories’. In an introduction, I tell the tale of my encounter with Fred Dannay, so it seemed forgivable to reprint the story all these years later.

I have always enjoyed this short form. For one thing, I’m a slow writer – about two to three hundred words a day – and I get the satisfaction of finishing something, whereas a novel takes me a year. And for another, I can take chances I wouldn’t dare in a long book. One story in this new book is in the form of letters from an agony aunt to a woman frustrated by her husband’s lack of passion. Another, called Angela’s Alterations, was inspired by the name of a small shop run by a woman with a sewing machine. And another by an unusual word I came across: Formidophobia, meaning a fear of scarecrows. I doubt whether I’ll get a trip to Paris out of this, but I can dream.

Reader, I Buried Them and other stories is published in the UK by Sphere and in the US by Soho Press. You can read more about Peter Lovesey and his books here.