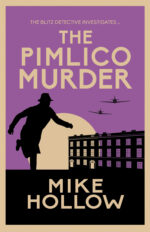 ‘CRIME FICTION IN THE BLITZ’ BY MIKE HOLLOW

The trouble with writing historical crime fiction is that it’s fiction, which means you make it all up, but it’s also set in the past, and if you get your history wrong it can really annoy the person who’s reading your book.

When I write, I want to entertain my readers, not annoy them, so while I love the ‘making up’ side of it, I try hard to get the history right too. The reason why I do this isn’t just because I’m picky about historical detail, although I confess it does irritate me when a fictional Victorian picks up the phone twenty years before it was invented.

No, I do it because when you write fiction you’re taking your reader into an imaginary world, and the moment you trip them up with that kind of anachronism it breaks the spell – you’ve lost them.

I write the Blitz Detective series of murder mysteries, and as the name suggests, they’re set in the Blitz, that period beginning in September 1940 when London and towns and cities all over the UK were pounded by devastating air raids.

The latest one, The Pimlico Murder, number six in the series, takes Detective Inspector John Jago to south-west London to investigate a suspicious death. A young man lies dead in a back-yard Anderson shelter in Pimlico, battered about the head and with two white poppies in his pocket.

In 1940, Pimlico was a fascinating place. Known as ‘the poor end of Westminster’, this once-genteel Regency development had fallen on hard times, its elegant terraces flaking, its grand family homes carved up into seedy flats. And now it was being bombed.

It wasn’t without its more upmarket corners, however – most noticeably the new Dolphin Square apartments, home to some prominent people, including fascist leader Sir Oswald Mosley until the government jailed him in May 1940. One character in the book is a follower who’s so keen on Mosley that he’s moved to a house just round the corner. His wife isn’t so taken with Mosley – nor, for that matter, with her husband.

When it comes to getting my history right, I read books of course, but even the best histories don’t necessarily tell you everything you need to know. The internet’s great for some of the more obscure details, although you have to beware of the junk. I study old maps of whatever location my story’s set in, but I like to go and walk the streets too, where chats with random strangers often yield priceless snippets about local life as it was in the past.

For The Pimlico Murder, a charming lady I bumped into near a street I was planning to feature showed me the route used by local villains to make their escape when the police came knocking in the old days, while a chance conversation with another resident led to an opportunity to see inside a coal cellar of the type most Pimlico people used as their air-raid shelter, still in its original condition.

When I’m not pounding the streets I delve into the newspaper archives and read the papers of the time. The minor details that this turns up are in themselves not essential for the ‘making up’ process, but taken together they help create a reassuring backdrop of everyday realism for the story that sustains the ‘spell’.

Sometimes a small press item can have a significant impact on the story. While writing The Pimlico Murder I came across a newspaper photo of a well-dressed lady standing on a bomb site somewhere in London. She became a woman Jago meets when she’s just had her picture taken by a press photographer, and she developed into a key character in the plot.

But there are other times when I spot something that was reported in 1940 but can’t use it in a book because people would think I’d made it up. Not exactly a case of truth being stranger than fiction, more one of truth being implausible in fiction.

Here’s an example. The result of the July 1945 general election was a major political upheaval – the country rejected Churchill as its prime minister. He’d led them to victory through five years of war, but now they wanted someone else.

At the time of The Pimlico Murder, in 1940, he was still a national hero, but in a newspaper of the very day my story begins I found a visiting American journalist writing that everywhere he went in London people admired and respected Churchill and said they didn’t know what Britain would do without him, but no one felt he’d be prime minister after the war.

Prescient words by the journalist, but if I’d put them in the mouth of one of my characters, I’m sure readers would have complained that it was unrealistic to have someone predict so accurately what no one could have known at the time.

Proof, if needed, that when it comes to historical crime fiction, sometimes you couldn’t make it up!