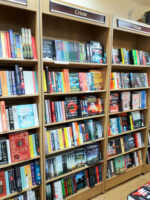 Winstone Books in Sherborne, Dorset, is our February Bookseller of the Month. Bookseller Elly Griffiths paid them a visit.

By serendipitous coincidence, February 2022 marks the tenth anniversary of Wayne Winstone opening his first bookshop. Winstone was working as Children’s Books Director of Waterstones and Ottakar’s and beginning to tire of the commute from the west country (he shudders when he thinks of Clapham Junction at 5am). In 2012, he decided to take the plunge into independent bookselling. Winstone says that he wanted to combine the discipline of the trade with the flair and community feeling of the independent sector. Three successful independent bookshops are a testament to how well he has achieved his goal.

The first shop to open was Winstone Books in Sherborne, Dorset. From the start Winstone was determined that his shops would reflect the local area. All his managers are trained to focus on their customers; there’s no central buying. When Sherborne was a success, Winstone opened a second shop in Sidmouth and then a third in Frome. He says that all the stores have different characters. Frome has a younger demographic and the bookshop, Hunting Raven, has a vibrant, slightly hipster, feel. Sherborne has a large retired community so children’s books sell well, catering to the grandparent market, as, of course, does crime. Sidmouth has a lot of visitors and so the clientele changes all the time. ‘They all have different flavours’, says Winstone.

I asked Winstone what was the best thing about being a bookseller. ‘The books,’ he replied instantly. After thirty years in the book trade, he still loves discovering new authors and waxes lyrical about the production values in children’s publishing. ‘It’s uplifting,’ he says. His best-selling category is crime with a loyal readership across all genres. In happier times, the shops had busy events schedules and Winstone hopes that this will start up again soon. He says that if people attend an event they will then want to read everything that author has written. I certainly saw this in action when I gave a talk at the Sherborne bookshop’s beautiful venue, Cheap Street Methodist Church. The audience were knowledgeable and enthusiastic and, luckily for me, keen to read my backlist. Series fiction does very well and bookshop favourites include Ann Cleeves, Donna Leon, Jane Harper and Mick Herron.

Winstone says that post-lockdown business has been good with double digit growth across all three shops. ‘Customers have rediscovered the high street, they realised they were in danger of losing independent shops.’

Birthday celebrations are planned for later in 2022, with street entertainers and children’s activities. Wayne Winstone is still passionate about the business of books. ‘It’s been huge fun all the way,’ he says. ‘I’ve had a ball.’