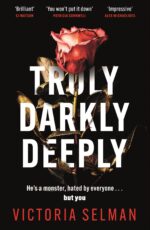 What if your father turned out to be a serial killer? asks Victoria Selman

My latest thriller, Truly Darkly Deeply explores a serial killer’s legacy through the eyes of his daughter who, twenty years after his incarceration, still can’t be sure whether he’s actually guilty. The book opens with my protagonist, Sophie, receiving a letter from the fictional, Battlemouth Prison saying Matty Melgren (the man who raised her) is dying and wants to meet.

It’s a serial killer thriller with a difference since it focuses less on the murders (there’s almost no gore in the novel) and more on the effect of them on those left behind. As Patricia Cornwell said in her endorsement (for which I am eternally grateful): ‘It draws you into the dark world of serial murder without celebrating it’.

Much has been written from the perspective of the serial killer’s wife, but it struck me that very little has been penned from the viewpoint of a child. I wanted to explore that relationship and its legacy without in any way glorifying ‘the killer’ whilst also looking at what it means to be a monster  and to love one.

It taps into my fascination with true crime and the criminal psyche, although what intrigues me just as much as the mentality of evil is how serialists are able to dupe those close to them. That it’s possible to share your life with one without ever suspecting it.

How would finding out that you have done so affect a person?

How could you ever live with the guilt?

Or trust anyone again?

In many ways it is a coming-of-age story as much as a thriller which ‘goes to the heart of how and who we love’- Sarah Pinborough.

Set across two timelines, the present day and 1980s (when I grew up) I was able to relive my childhood- TV dinners in front of Dynasty, dancing to Madonna and countless fashion disasters! Like Sophie, I also made a Royal Wedding scrapbook and remember vividly coming home from school to be told we were at war with Argentina.

As well as being a source of nostalgia, the 1980s backdrop also serves a dramatic purpose, a metaphor for what is happening in the book at the time. The Royal Wedding juxtaposes with the lie behind the fairy-tale of Matty and Sophie’s mother’s relationship. The law requiring seatbelts to be worn, reflects the dangers lying in the road ahead.

And like all roads, there are two sides to Truly, Darkly, Deeply: a serial killer thriller and a coming of age narrative. A tale of the triumph of hope over despair; of losing everything only to find what you really need is inside you all along.

You can read more about Victoria Selman and her books here.