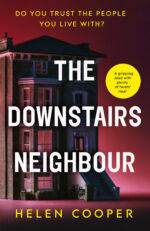 The salon is the only place I hum. Before the other hairdressers arrive, before the customers come, a tune trembles in my throat, a soundtrack to my routine of shining and sharpening. I polish up the mirrors and they show me flashes of my face. It’s bare and aging; my skin sags as if it hardly has the energy to cling to my bones. I never gawp at myself for long. And I never look at the corner, to see whether the eyes are watching me. If I don’t glance over I can pretend I am alone, that this place is mine.

I check my schedule and see I’ve got someone new at nine o’clock. My stomach clenches. An unknown. I tell myself to relax. I’m a professional, I know how to deal with a new client. Put them at ease and act like I’m at ease. Smile and fuss and try to work out what sort of person they are. Most importantly, show them what they could get out of coming here. More than just a trim: a chance to chat, to escape.

I squint at her name in the book. Josephine Hess. She’s asked for a dry cut. Suggests she wants it over with, quick and efficient. An image buds in my mind of a tall, bony woman with a sharp face and flat hair. I can’t tell if I’ve spun it from nowhere, or if I’m picturing someone from my past.

When she arrives, I find I’m wrong. This woman is large and curvy beneath her loose clothes. My husband would have had something to say about her figure. Her hair streams over solid shoulders in thick, tough-to-cut curls. My nerves rise again, but I smile and gesture to Cutting Station Two.

The adjustable chair sighs as she sinks into it. I step up behind, gown at the ready, and I’m met by her reflected stare. Though her hair is rich and wild, Josephine’s eyes are dead. Hovering behind her, my face doesn’t look much better. A grey, looming ghost.

“Right.” Her voice matches her eyes.

I stall, unable to slip into my usual chatter. I wish it was Jane or Kathy in the chair; someone whose hair I’ve been trimming for ten years. And I wish this new woman had arrived at a busier, buzzier time.

You should see it normally, I want to tell her, it’s something special. Something you wouldn’t expect.

Instead I rally, digging into my years of experience. I will make her smile, even though she looks as if she’s forgotten how.

“Lovely hair,” I say. “It always been this curly?”

“Yeah,” she says, in that same flat tone. It’s as if all her energy’s channelled into making the curls spring from her head.

“What would you like me to do with it today?” I ask.

I hesitate. “This short…?” My hand hovers an inch above the ends of her hair.

I raise my hand reluctantly. I can hardly bear the thought of chopping it all off. At one time in her life, surely she must have treasured these curls.

I pick up my comb and tease it through, taking longer than needed. At last I pick up my scissors. They’re super-sharp and super-shiny. Sometimes, when I grip them, I feel a surge of power flood my body. I hope my clients can’t tell. I hope the eyes can’t tell, snooping from the corner. Now and then there’s a shake in my hand, a reminder of the past. But I’ve learned to steady it.

“Just be quick,” Josephine says, “I’m not bothered how it looks.”

She doesn’t understand, I think. She doesn’t know most people want me to take as long as I dare; that some of them close their eyes as I rinse or comb, relishing the contact.

I say this because I love music. Some days I think it saves me.

“Look,” Josephine says, so sharply that I jump, and my eyes snap to her reflection, “I’m not interested in chitchat, okay? What is it with you hairdressers?”

Anger swells. A familiar feeling: somebody is belittling something that’s important to me. Something they don’t understand. I squeeze the handle of my scissors as they hover close to her right ear. Part of me wants to hiss: are you insulting the woman with the sharp implement? But a bigger part, the part that takes pride in this place and what I’ve salvaged of myself, knows I wouldn’t make a threat like that.

A reporter from the BBC once visited this salon. He was brought in when it was busy, and he gushed about the atmosphere, calling it extraordinary. I showed him round as if I was queen of it all, introducing him to clients, telling him about the way things work. Then he said something that I knew was for his scandal-seeking viewers. “I’m surprised they let you leave these lying around…” He was pointing to a pair of scissors.

I told him proudly, and truthfully, that in the ten years I’ve been hairdresser here, there has never been an incident. Elsewhere, the women use anything as a weapon. Cleaning products, planks from their beds. But here, where sharpened scissors glint on every surface, I’ve never seen blood.

It’s not because of the eyes in the corner. It’s because nobody wants to spoil this place. Some call it their haven, and it’s certainly mine. Before they let me train, the days were hell. I used to think I’d been stuffed with maggots, but they were memories, writhing in me, making me bite the soft insides of my cheeks. Now I have the comfort of a routine, a working day. I am the hairdresser. Not the woman who reeks of booze in the mornings, or the woman whose kids got taken away, or the woman whose nasty, sagging face is plastered across every front page because she stabbed her husband to death.

Now, if my sister or my son came to visit, I could tell them I’d been at work all week, and I wouldn’t have to lie like I used to.

One day they’ll come. And I’ll tell them.

My scissors hover next to Josephine’s ear.

“Most people like a bit of chitchat,” I tell her firmly.

“I bet you don’t ask them where they’re going on holiday.”

I lower my eyes, inspecting the crooked line of her parting. “No.”

“So what do you chat about?”

“Some people like to talk about humdrum stuff, stuff that makes them feel…”

“What about the people who don’t want to be comforted?”

“Everyone wants to be comforted.”

“The cells and the barbed wire take care of that. I can make people feel a tiny bit better for half an hour. After all, we get to request a haircut for good behaviour.”

“Do you ever talk about anything real?” Josephine asks, her eyes challenging me in the bright mirror.

I pause. I still haven’t snipped a single curl. My scissors dangle from my fingers, which have twined themselves around their handle.

“Some people want to talk about their life before,” I say.

“Anyone want to talk about what put them here?”

“So you don’t know what kind of criminal is sitting in your chair?”

I breathe in. “And you don’t know what kind of criminal is standing behind you, holding the scissors.”

Now her eyes have a spark of life in them. Perhaps this is what she wants. To spar with someone in a place where it won’t blow up into a fight. To confront and be confronted, without getting her head kicked in. Bizarrely, this salon with a dozen pairs of scissors is the safest spot to pick an argument.

I grasp a chunk of her hair. “You sure you want all this to go?”

I thrust my scissors into the dark mass of curls and begin to cut. I’m not careful or polite; I plunge and hack, let her feel chunks of hair gasping from her head. I cut with a violence I’m sure will make the eyes in the corner fix on me with sudden force.

But it’s Josephine’s eyes I’m interested in. When I glance up, they’re wide and riveted, watching her glorious curls being savaged. And I detect, as I reckoned I might, the ghost of a smile playing around her mouth.