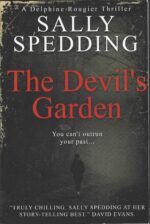 Eye for an eye, by Sally Spedding

Your eyes are our business…

This is to inform you that Eyebrite Opticians Ltd. is now under new management. Our records show that six years have elapsed since your last visit for a check-up and purchase of replacement glasses and sunglasses. We are concerned that in these intervening years your eyesight will have undergone certain negative changes making driving potentially unsafe. Also, the care of your elderly and dependent mother.

We therefore urge you to contact us at the first available opportunity and make an appointment. This will bring you and Mrs. Robertson renewed peace of mind. Should we not hear from you within the next fortnight, it may be necessary for us to notify our contact at the DVLA who will take the matter further.

Assuring you of our continued commitment to all our clients’ safety and well-being,

That surname rings a bell, and those two initials, but just then, singleton Maxine Robertson hears Doris, her seventy-three-year-old mother, call out from the downstairs cloakroom. She sniffs. Another accident…

She’s only just returned home with the weekly shopping to one of the last council houses in Essex, to find that snarky letter shoved halfway through the letterbox. The thought crosses her mind to use it to clean up her mother. But no. Too easy. The sender deserves better than that.

Joanne Claire Cartwright. Can this be the same bully who dogged her footsteps for five long years at Bricklands Road Comp. before bettering herself at the taxpayer’s expense? If so, she needs to be taught a lesson. Blackmail is still a criminal offence, and already a suitable punishment blooms in Maxine Robertson’s churning mind.

“Coming!” she calls out to her stranded mother and tentatively opens the cloakroom door.

Half an hour later, with the air in both the cloakroom and hallway thick with ‘Daisy Days’ spray, and a specially ordered video showing the Isle of Skye’s delights on the TV screen, Maxine changes into her trainers and, because it’s beginning to rain, a new, green anorak bought for a pound at Barnardo’s. A store doing better business than most, given the level of poverty blighting even a formerly comfortable town like Colchester.

“Won’t be long,” she reassures Doris, fastening its hood to fit snugly round her jaw and tucking in those few strands of giveaway red hair. “You’ve got your Emergency button round your neck if you need it. OK?”

Her mother, who’d survived a serious stroke on New Year’s Day, which left her doubly incontinent, nods as the TV shows a half-empty passenger ferry unloading its human cargo on to a deserted, shingle beach under a blue sky full of looping, wheeling seagulls.

With those over-priced, still perfectly serviceable sunglasses in place and one or two other useful items in both side pockets, Maxine hurries past the town’s latest mosque, before the castle she’s also never visited, looms up in the distance. Even in the fading light she avoids eye contact with anyone. Here are too many strangers and misfits, also miscreants from her days at the recently bulldozed Comp, who’d dripped too much danger into their veins. Allowed their brains to rot.

Her more recent existence, has by comparison, been monastic and frugal, but not by choice, what with her poorly mother’s tiny pension, ending next month, and their modest semi just sold by the council to a Yemeni family who’d snapped it up for nearly half a million.

“Bri… i… ght Eyes, how can you close and fail…?” she half-sings to herself, recalling that poignant song about wild rabbits from too long ago, as she spots a new, silver BMW convertible with the personalised number plate JOC 1 parked outside Eyebrite Opticians Ltd. Glistening meat in the sandwich of a hairdresser’s and shoe shop. Both stickered with closing-down sale signs.

She is, as always, whatever her mother used to say. But then Dora Robertson hasn’t really known her at all. Nor her dad, drowned in a slurry tank out in Rowhedge. Making ends meet during weekends at Fiddlers’ Farm.

Eight years ago, today. Perhaps the cause of her mum’s embarrassing “accident”.

Meanwhile, through Eyebrite’s large, plate-glass window, Maxine notices a fleeting, female form wearing red stilettos, disappear through what she remembers is the store room’s door. Something about her is familiar. In fact, very familiar…

There’s no bell, not like before. Nothing so common as that, where glass and steel are king. The only colour belongs to giant-sized photos of models wearing EyeBrite’s latest frames, also to several sharp-leaved, artificial plants strategically placed in angular pots along the immaculate white walls.

To Maxine’s relief, she’s on her own, allowing her to draw back the nearest eye-testing booth’s thick, black curtain, before entering and closing it behind her. She lowers her anorak hood, removes her sunglasses and stealthily checks the equipment she’ll need.

All is in order.

She doesn’t have to wait long before what has to be those same red stilettos already glimpsed, click-click their way from the store room towards the large Customer Service desk. A sleek, uncluttered pit-stop where lies are spun and fear reigns, screwing those who can least afford to pay. For in most people’s subconscious, blindness is a fate ranked with being buried alive. Maxine likes that word “subconscious”. It’s somehow comforting, like hot chocolate. Her mother’s favourite drink. And then, without warning, comes a distinct whiff of her, too obvious in that confined space. A quick check of both bare hands shows how soap hadn’t quite reached behind three of her long fingernails.

She holds her breath, then hears the EyeBrite phone ring, and “Miss Perfect” of the smooth blonde hair and expensive navy suit, listens for a while before issuing her warning, not in her former ‘Estuary’ accent, but elocution-trained.

Silence, in which Maxine feels sick.

“As an experienced practitioner,” continues the optician, “I’m guessing you might only have a month at most before…”

It seems Mr. Shaw has ended the call, before any threat to inform the DVLA and whoever else. She bangs the receiver down so violently, Maxine hears it crack. Then comes loud swearing in quite a different voice.

Essex girl. All over again.

The one she’d feared for too long. Hard as brass and coming her way, swishing aside each booth’s curtains in turn. Until…

“You.” Sneers the ringless enemy, upon recognising her. “Good God.”

Maxine pushes her enemy towards the empty chair and quick as a flash secures that mean, white neck to the back of the chair with a thick piece of string, before lowering its padded seat until Joanne Cartwright’s startled, over made-up face stares back in the mirror. Next to it, a display of alphabet letters arranged in size order. From huge to miniscule.

“And I want an apology.”

“What for, ye lardy piece o’ rough? Not changed a jot, ’ave ye?” Still she stares. Still superior. But Maxine also knows the ropes. Uses her right foot to usher the mobile X-ray forwards until it touches her captive’s nose. Trains two fierce beams on both those hard, blue eyes.

She then coolly clicks the ‘Optimum’ switch twice, delivering an even more powerful dazzle.

“That letter you sent me.”

A double click delivers a pair of dense, white rays; another yelp of pain and a pathetic struggle to escape, while Maxine’s sharp little blade is already breaking skin.

“Please read as much of that alphabet as you can,” she encourages her, aping Cartwright’s fake voice. “From left to right. Down to line four would be brilliant.”

“Good. The job’s almost done. Remember how you stole those cakes I made at school? Copied my poetry, yet always ridiculing me? Making me look an idiot?”

“Let him sort you out, then. Even if he can’t, he’ll charge you at least two grand for useless remedial treatment, and twice that for procedures you’ll never need. Good luck there, cos you’ll be blind for life.”

The former class bully’s eyelids flutter uselessly against the boiling, melting glare, liquifying her eyeshadow, eyeliner and mascara before roasting both pupils, corneas and surrounding skin.

Then comes a roar of agony. And another.

Maxine allows herself a smile before severing the neck’s string, drawing the curtain aside and legging it towards the door to the street where that same pristine BMW stands waiting. “There’s always the DVLA…”

A backwards glance sees the sightless blonde struggling to follow but colliding with the counter, then a potted plant, bringing it down with a crash before grovelling in her ruined suit across the slate-tiled floor. Its skirt has ridden halfway up her thighs while that deep cut in her neck trails too much blood. Her stilettos lie adrift of each other, but more to the point, both eyes are merely charred hollows. All bodily movement gone.

Maxine recalls her dead dad and knows the signs.

“Where’ve you been?” Doris Robertson complains once her only child re-appears. Her movements rapid, purposeful. That Isle of Skye video hidden in her anorak pocket. The TV is switched off and unplugged. From the under stairs cupboard, Maxine withdraws a small ready-packed suitcase for each of them, also a foldaway commode in a bin liner, and a carrier bag of snacks to which she adds the video. Like a proper boy scout, she’s prepared.

“Where we goin’, Max?” Doris asks as her energized daughter helps with her coat and exchanges her smelly slippers for shoes.

“You’ve just been watching it. We’re having a holiday there, nice and far away. Trust me,” as she locks the front door behind them, leaving the key to that meanly furnished house under the mat. Her old van is ready, conveniently hidden by an overgrown privet from their nosey neighbour. Its tank full.

Maxine sighed. That remote, faraway island could have been Guernsey or anywhere.

Having secured her mother’s seat belt, then her own, Maxine engages first gear, and draws away from the kerb, singing a very special song her late Scottish father also sang in a deep, bass voice while waiting for the kettle to boil.

“Speed bonny boat like a bird on the wing. Onward the sailors cry.

Carry the lad that is born to be king, over the sea to Skye…”

Doris stares at her in wonderment, then a widening smile of recognition lights up her old, lined face.