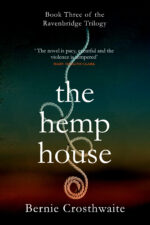 Them and Us, by Bernie Crossthwaite

The room was painted bright yellow. There were vases of flowers, seascapes on the walls, deep soft armchairs. I chose the one facing the door. Really, I thought, you would never guess it was a prison.

If I’d had my say I would have gone for something more spartan – lavatory green walls, furniture made of metal and plastic, like in the old days. Of course, I realised that flowers and comfortable seating were signs of a more relaxed progressive atmosphere. But I doubted it would fool anyone. It would always be us and them.

Prison Officer McGovern was busying herself putting a stack of files in order. She kept glancing at me as if seeking reassurance. Naturally everyone was a bit nervous. A pioneering institution like this had no set pattern to rely on. Newness and uncertainty were in the air along with the smell of fresh paint.

The door opened and a woman entered, accompanied by a prison officer. Her body was soft and fleshy, her large bust making her top heavy. Her legs were so skinny they didn’t look strong enough to support her weight. The officer left the room, shutting the door quietly behind her.

I stood up at once. This was an important day – my first induction interview. I wanted to do things properly from the start. Absurdly, I wanted to make a good impression.

We shook hands, introduced ourselves – Linda Hoggart, Mary da Silva – all very matey. As we sank into the low chairs, Linda puffed wheezily. A smoker, I presumed. Once we’d settled ourselves, we sat for a moment in silence. Then we crossed our legs at the same moment and coughed in unison. It reminded me of the game children played, pretending to be the mirror image of their partner. I was amused by our synchronicity of movement. I smiled, but then I saw that Hoggart’s expression remained as clenched as a fist.

McGovern placed a folder on the small round table between us. I looked down at it thoughtfully, but didn’t pick it up. I already knew everything that was in it, the whole sordid story of misplaced devotion, corruption and betrayal.

We dealt with the preliminaries briskly – the details of the charge, the duration of the sentence, the arrangements for release on temporary licence. After that was over, Hoggart seemed more relaxed. She looked around her. Perhaps she was bored already.

‘It’s a bit hot, though, in’t it?’ She ran her nail-bitten fingers under the neck of her jumper. ‘You can never get central heating just right, can yer?’

I prided myself on being able to place an accent. This was a northern voice. No doubt about those vowels. Yorkshire … South Yorkshire, in fact, judging by the diphthongs. Sheffield most likely, but it could be Rotherham, or even Barnsley. Home, I reminded myself, though I never thought about it like that these days. The Shakespeare Road estate was two hundred miles and thirty years away.

There had been a Linda there too …

I examined the woman opposite me intently and saw with a shock that, yes, the younger woman was there like an echo. She was carrying more weight now, but she had always been fleshy, always had a large bust that was out of proportion, always had those unexpectedly skinny legs. She might be Linda Hoggart now, but I knew her as Linda Flood. The scourge of Shakespeare Road. My tormentor in chief.

Despite the warmth of the room I felt a chill, as if I was sitting in a draft.

‘Everything’s very new,’ I said, keeping my voice firm. ‘I’m sure adjustments can be made.’

Did she recognise me? It was impossible to tell. There was nothing in her face but blank hostility. Just like old times.

It had started young. Why did she hate me so much? Was it because I was the only kid in the street too scared to cross the railway line before a train hurtled past? Or because I’d refused to smoke with the others under the dripping arches of the viaduct?

Things got worse when I won a scholarship to a private convent school some miles away. Linda would barge into me as I waited at the bus stop, then snatch my beret and hurl it into the road. Loud shocking swearwords hung in the air as she ran off. I could hear the cackle of her laughter even when she disappeared round the corner. And later on, when it came to boys, she knew I had never seen a boy naked, and she would do it with anyone.

‘Well, if it isn’t the Virgin Mary,’ she said when she saw me, and I would hurry away, my cheeks hot with shame and embarrassment.

Needless to say, I went on to academic distinction, while at the local comprehensive she achieved very little. Yet what she had done took considerable intelligence. Perhaps I had underestimated Linda Flood.

There was a soft knock at the door and tea was brought in – two green mugs on a tray, no teapot or milk jug or sugar bowl.

‘Just the job,’ said Linda, swigging down half a cup in one gulp. I took a sip and shuddered. It was strong and already sweetened. I always drank Earl Grey with a slice of lemon. More improvements needed, that was clear.

We put our mugs down at the same time, but this time I wasn’t amused by our synchronicity. Linda shifted heavily in her chair. It was time to explain the ethos of Crampton Wood: the individualised rehabilitation programme, the educational opportunities, the liberal approach to family visits. Did she have kids, I wondered? Several, by the look of her wide hips and slack stomach. I had been married once, but had no children. Now it seemed unlikely.

Linda’s gaze wandered occasionally, then darted back. Her blue eyes, though sunk in her puffy face, were still remarkably vivid, but I couldn’t read her expression. I had no idea if she remembered Mary Kavanagh, as I was then. I liked to think I had changed a great deal, that I bore no likeness to that innocent schoolgirl. And anyway, perhaps I was just one of many victims. But Linda Flood had made my life a misery, and if she did recognise me, she was perfectly capable of playing that game again.

Or maybe it was my turn now…

I thought I’d left Shakespeare Road behind me for good. With a degree in Linguistics and a teaching qualification I’d travelled widely – Sweden, Japan, Singapore, South America. And all that time, Linda had passed her days in one institution or another. My mother had written regular letters, with all the pathetic news from Shakespeare Road, including Linda’s dismal progress. Eventually I settled in Peru, got married, and the letters dried up. My mother lives in a home now, somewhere near Doncaster.

Linda twisted round to reach into the pocket of her cardigan, searching for cigarettes no doubt. But thinking better of it, she sat back again, her fingers drumming restlessly on the arm of the chair.

Prison Officer McGovern was looking for another file. It was time to wind things up. There were more inmates to interview, more paperwork to do. We couldn’t go on forever, pretending to be pally over cups of tea.

McGovern opened the door. I rose slowly from my chair. The induction, as I’d feared, had achieved nothing. However clever Linda had been, she was still a hard-faced bully from Shakespeare Road. Nothing could bridge the chasm between us.

The three of us marched in single file down a corridor that smelt of fresh plaster. As we walked, I wondered, not for the first time, if I really belonged here. I remembered the life I had with Miguel before he left me – the lovely house by the beach, the trips into the mountains on horseback, the wild parties. Quite a contrast with my life now. Those wide intoxicating horizons had narrowed to this – walking between high walls with my childhood tormentor. It was like some bizarre wheel of fortune.

We climbed a staircase, filed down another corridor, and stopped outside Room 24. McGovern opened the door and stood back to let us enter. It reminded me of the study bedroom I had at university. I took in the anglepoise lamp, the kettle, the single bed.

‘The inmates of Crampton Wood have been carefully chosen, the type of women who have the potential to benefit from this type of regime.’ Linda’s blue eyes rested on me for a moment. Did I imagine the old familiar mockery and scorn in that gaze? ‘We hope you will use your time here profitably.’

‘You’ve even got your own wall-mounted TV.’ She switched it on. It was a quiz show, set in a brightly coloured studio accompanied by loud tense music. We stared at it for a few moments, then Linda snapped it off. ‘You won’t need to watch that, will you, Mary? Because you know all the answers already.’

Oh yes, I was so clever that I didn’t see that I was being used and exploited right from the start. The stuff was always hidden in my suitcase, not Miguel’s. I didn’t ask what it was. I trusted him. How stupid was that? No one believed I could have been so innocent. When I was caught at Heathrow, I was sacrificed to protect the others. Miguel abandoned me to my fate without a backward glance. He melted away like early morning mist, and I never saw him again.

‘We have an open policy at Crampton Wood,’ Linda said. ‘Though naturally, you will be locked up in your room at night.’

Sometimes she watches me when I’m studying in the library, working on my MA on regional accents. If I can’t sleep, I lie stiffly on my narrow bed and think of Miguel. Sometimes I’m sure I hear someone outside my door, breathing wheezily.

I try to recall the relevant tit-bits from my mother’s letters: You’ll never guess – Linda from down the road – she’s got a job in a hostel looking after difficult teenagers – she should be ideally suited to that job … And a couple of years later: Linda’s on a course, training to be a prison guard or whatever – would you believe it? And in one of her last letters, before I made arrangements for the nursing home: Linda’s doing very well in her job at Holloway by all accounts, so credit where it’s due …

She’s a diligent Assistant Governor. She’s very professional, and carries an air of authority. I think the other prisoners are a little bit afraid of her. She never has any trouble. The other officers try hard to be friendly and helpful, all part of the ethos of Crampton Wood. I don’t find it convincing.

If there’s one thing I’ve learnt from being here, it’s that it will always be them and us.

You can find out more about Bernie Corssthwaite and his books here.