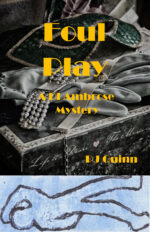 He often sat in the park, especially when Wimbledon was on TV. It amused him to see how many people dug their racquets out of cupboards for a few weeks. He liked to watch the girls playing on the old courts and listen to the snippets of life passing his bench.

“Potatoes. And carrots. And what about spaghetti?”

And what about spaghetti indeed? Sam smiled at the memory. Momma da Mario had ladled the stuff into them. They didn’t dare complain. With her arms folded across her bosoms she looked like a sergeant major. She must have had a spaghetti tree in the garden. Still, he remembered holidays at her farm with fondness, and he couldn’t afford much better in those days – not on army pay. They were good days though, spending his leave with Polly, away from his mother.

“So, I says to him,” a voice said near his bench, “you need one of them deodorant sprays. That’ll dry you out. I can’t bear to wash your shirts.”

“Missing girl found dead on common,” a car radio blared. One of the women glanced towards the car park.

“They’ve found that poor girl,” she said. “Terrible.  So young too.”

Her companion wasn’t listening, still too busy with her own topic. “George really is the limit. I told him I was going to send the invitations, but he has to send them. Now everyone will have two.”

George? Who was George? The name rang a bell from his Gulf War days. Ah yes, he was the Geordie lad, the one who used to mimic the sergeant behind his back. Fell in the latrine… They had the emptiest mess hut in Iraq. Even the hawkers stayed away that day.

“Sorry,” a girl called across the court. “I keep forgetting we’re not playing doubles.”

Her companion laughed. “My game!” she announced.

Cricket was his game at school. He used to look good in white flannels. Smiling again, he recalled that last cup match against St. Bart’s. Eighty-six in the shade. There he was, sweat pouring off his face and the umpire looking at his watch. A six! A beautiful six! They carried him to the pavilion on their shoulders.

The tennis girls were giggling. “Look at Mr Rowlings,” the blonde one whispered, audible through the wire netting. He realised he’d been enacting the game with his hands and sat very still. Let them laugh. They never saw such a game.

The girls lounged against the net. “I can’t stand these shorts,” the dark one complained. “Mum says they go with my red top, but I hate that too.”

He had hated the tennis club blazer and panama his mother bought him.

“Turn right round,” she’d instructed. “Isn’t he smart?” But his father had laughed.

“Looks like he’s on the stage,” he joked. “Do us a dance, Sammy.” When was that? He could only have been about nine or ten.

A ball rolled at his feet, startling him. “Chuck us our ball, Mister Rowlings,” a voice called.  Picking up the ball, he threw it, way beyond the children. “Oi, Mister,” the boy called again. “You didn’t have to throw so hard.”

Satisfied, Sam Rowlings settled back on his bench. He could show them a thing or two, for all he was nearly sixty. All those evenings in the camp gymnasium had paid off. In his prime he could lift eighty pounds. The lads who used to push him around in the mess treated him with respect then. And the girls – it was amazing how they suddenly started talking to him.

A plump woman was struggling across the gravel, pushing a pram and hauling a weary toddler. She saw the space beside him.

“This anyone’s seat?” she asked and without waiting for a reply flopped on the bench. “It’s a warm un, isn’t it?” she added, loosening her cardigan. “Too warm to be dragging little ones, but their mum’s at work and I couldn’t stand it inside a moment longer.”

She was the sort who could tell her life story in five minutes. “If you ask me,” she continued, “a mother’s place is at home, but you know these young women. They must have their washers and freezers and holidays abroad. I’ve told her, ‘You’re lucky to have a mum to mind them, my girl’.” She sniffed fondly, then paused, staring at him. “It’s Mr Rowlings, isn’t it? Well, I never. I didn’t recognise you. Been ill, have you? I was sorry to hear of your mother’s death. Still, she had a good innings. You remember me surely? Alice Hutchinson. We moved away a few years ago. I came back when my Bill died.  I remember your mother well. A fine figure of a woman. She always had a sharp tongue, but she did a lot of good for the town…”

He grunted in the right places, not minding a bit of company. The days were long, even with the tennis girls to watch.  Mrs Hutchinson nodded in sympathy.

“Your mother used to play a lot of tennis, didn’t she?” she asked. “I remember now. She played for the county when I was a girl.” Then she smiled, the sort of smile that says, of course, my dear, I understand.  “I expect you like to come here and think of her.  I used to go to all Bill’s haunts after he died.”

The car radio was quieter now, as if the driver had wound the window up, but it was still audible. The news reader had finished the headlines and was giving details. “The body is thought to be that of Janine Fleming―”

“They’ve found that girl, you know,” Mrs Hutchinson interrupted. “They say her attacker must have followed her onto the common.  The police found her tennis racquet first.”

She shuddered in horrified delight. “And no one noticed a soul, no one suspicious-looking, not even a stranger. Just think, the murderer could have been sitting on this very bench.” She nudged him to emphasise her point. “The police were searching all round the park this morning you know, and yesterday. I watched them from my window.”

He had seen them himself. Two constables and a man from CID.

“Fifteen love,” one of the tennis girls called.

Sam Rowlings watched with pleasure. It was good to see young people like her, with their bright faces and lithe movements. He remembered how his Polly used to look in the firelight. Those girls playing tennis were thin compared to her. Why did the young women diet nowadays? A man liked something to get hold of. Polly was always so comfortable. If she had married him things would have been different, but his mother’s constant interfering scared her off, just as it had scared off every other girl before then and since…

Sighing, he returned to the present. The tennis girls were laughing, their voices like bells out of tune. The blonde one reminded him of a photograph of his mother that used to stand on the mantelpiece. She was lithe and pretty before she married his father, though her expression even then was sour.

Mrs Hutchinson was leaving, pushing her pram through the gates and down the road. He turned back to the game in front of him. Yes, the blonde looked like his mother. Even her hair was the same and the bright red lipstick.

Taking out his sandwiches, he began to eat, slowly and methodically. All the while, he watched the tennis girls playing in front of him. He was still watching when they picked up their racquets and collected their balls. They slammed the iron gate, making little flecks of rust fly in his face.

“What are you staring at?” the blonde one asked him rudely. “Haven’t you got something better to do?” She definitely reminded him of his mother.

He wished she didn’t. It was cruel of her, almost as cruel as his mother had been. Not that others would have thought his mother cruel. To them she was Jean Rowlings; the celebrated tennis player, organiser of raffles, opener of bazaars, manager of committees. But a child sees the private side. If she had let him become a person instead of treating him like one of her possessions, he could have forgiven her, but he’d had to get away. Joining the army was his only route. It was her fault he had almost died, her fault that he’d seen his best mate blown to pieces beside him…

“Perhaps he likes your legs,” the dark one suggested.

Both tennis girls shrieked with laughter.

They walked towards the fork in the path, where they stood chatting and giggling for another ten minutes. Finally, they parted, the dark one into the street, the blonde taking the route towards the common.

“See you tomorrow,” she called to her friend. Then she set off, swinging her racquet.

Quietly Sam got up and followed her.

He wasn’t nervous. An icy calmness had begun to fill his mind. He ’d get away with it again. He always did. The police hadn’t even questioned him. No one ever noticed him.

Suddenly the girl turned back, almost bumping into him. “Mel!” she called. “I forgot to give you your invitation.” Running past him, she disappeared towards the road.