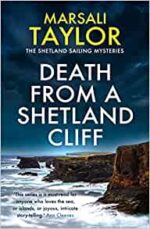 The Silent Witness by Marsali Taylor

A classic ghost story for Hallowe'en and long winter nights

I was just laying a race mark when I caught sight of Fred Fisher, leaning up against a strainer. He was less than twenty yards away from me, because I’d been teaching my advanced class about how the wind bends round headlands, and just to make sure they’d been listening, I was putting the mark right into the bay of Busta House, where the wind sweeps round the cliff at almost 45 degrees different from the rest of the voe.

Fred was wearing his usual red and black check shirt and black jeans. His navy cap was tilted down over his brows, and he was whittling a bit of driftwood. I registered it was him, then my anchor touched bottom, and by the time I’d shortened the buoy rope and looked up again he was gone, silently across the sheep-cropped turf, and so quickly that I didn’t even catch the closing of his house door.

It didn’t take me long to work out why. Just a month ago he’d bought a car from my pal Magnie, and paid with a rubber cheque. He’d promised he’d bring the money in cash, and when there’d been no sign of him, Magnie had gone along to his door. Fred hadn’t been there, and, according to his crony George Worrall, wasn’t going to be there for some time either.

‘Straight up,’ Worrall had insisted, ‘he never said nothing about a car, or any money. Just said he was going off to Scotland to do a bit of touring around, and left, like a bloke does. If he calls, I’ll tell him to give you a ring.’

Naturally, I rang Magnie straight away. ‘If Fred Fisher’s still owing you money,’ I said, ‘he’s at home now. I just saw him in the field below the house, but he nipped back in sharpish when he saw it was me.’

I waited, rocking gently, until I heard the shrill whine of his new Hyundai bumping down the track to the cottage. It was an ordinary Shetland cottage that the two Australians rented, standing four-square to the water, with a white porch set not quite exactly between the two small, square windows, a little lean-to shed at one end, and a peat stack at the other. The front door was square in my view, and the door to the lean to; I couldn’t see the back door, but I kept an eye on the gravel track leading up to the road. Fred hadn’t left the cottage, I’d take my oath on that.

It was Worrall answered the door, though, and from his gestures he was saying he still hadn’t seen Fred. He tried to close the door, and Magnie got a foot in it, and there was a bit of scuffling, which ended in Magnie taking out his mobile.

The police car went along the road just as I was put-putting the rescue boat back to the marina. Good for Magnie, I thought. I was halfway through the class when another police car followed it, and another, and then the doctor’s car. My sailors were far too busy rubber-necking as they got to the buoy to remember there was such a thing as wind-bend, let alone how to deal with it, so after I’d chased them back out into deeper water, I shifted the buoy around the headland. That was how I was the only one to see the telltale screens being erected around the far end of the peat stack, and the sniffer dog being put back in his boot-cage, and the constable bringing the shovels out of the car.

‘Murder,’ Gavin said, when he called in to Khalida on his way home, ‘and I really shouldn’t be here. All the nasty stuff is waiting for me at the station.’

‘It’s a clear case against Worrall. I sent four officers to ask around, and nobody, but nobody, ever heard Fisher talking about going away, or sold him a ticket for Northlink, even though the car’s at the terminal. The bank has admitted that he drew out £1,200 to give to your pal Magnie, in cash, which might mean he was going to pay his debts before going – except that according to Magnie, he didn’t.’

‘I think you can take that as read,’ I said. ‘Magnie’s been hopping mad about it for weeks.’

‘Furthermore, unless he was exceptionally dressy, or given to travelling light, his clothes are all there. Finally, there’s a wad of money in a drawer, just over £800, and rather to the girl at Brae Garage’s surprise, Worrall has taken to paying for his errands in cash these last three weeks.’

‘Total innocence, knows nothing about any of it, particularly the bloodspots on the hall floor, or the body buried under the used end of the peat-stack.’

I sat upright. ‘That’s impossible. He didn’t have time.’

Gavin stared at me. ‘Of course the really interesting thing is why your Magnie should be making such a fuss now. When Worrall denied that Fisher was there, he phoned the police station and insisted that Fisher was in the house.’

Gavin’s head jerked up. ‘You saw him?’

‘Yes, that’s what I don’t get,’ I said. ‘I suppose Worrall would just have had time to kill him, drag him out of the back door and bury him in the soft peat mould before Magnie arrived, but he’d have to be fast, and I’m surprised I didn’t hear a spade going.’

Gavin’s eyes were very intent in the dim green light of the cabin, pupils expanded until there was only a rim of iris.

‘Did you see Fisher’s face?’

‘You never saw his face,’ I said, ‘he wore a cheese-cutter, with the peak pulled down. It was him all the same, his check shirt, and cap, and build. I’d forgotten about him owing Magnie money, because I wasn’t thinking about it, till he disappeared in such a hurry.’

‘I can’t imagine why he would, given that it was seeing Fisher that led to the murder being discovered,’ Gavin said, ‘but could it have been Worrall imitating him?’

I shook my head. ‘I saw his hands moving. You’d have known him too, if you’d seen him. Fisher used to whittle like his hands were doing it on their own. It was beautiful to watch, and Worrall couldn’t have imitated that in a million years.’

Gavin was silent for a moment. ‘Don’t tell anyone about this,’ he said eventually. ‘I don’t want you being called as a witness. Magnie’s unavoidable, but he needn’t mention you, just say he was fed up of being put off. Otherwise, there’ll be a scandal in court and the Press will have a field day.’

‘He didn’t have time to bury him right now, did he?’ I said slowly. ‘And if he’s been paying the garage with cash for three weeks, then―’

Outside, the terns had fallen silent, and the wind had died away. Khalida’s mooring creaked against her side, like a ghost’s chain. The first fine threads of dark were gathering across the sky. Gavin’s face was shadowed. ‘I don’t know what under heaven or on earth you saw,’ he said finally, ‘but Fred Fisher, the body we found buried under the peat stack, had been dead at least two weeks.’

(This is an update of an Australian case, Campbelltown, 1826, and was previously published in the monthly magazine Shetland Life.)

Marsali’s eighth in her Shetland series, Cass and Gavin’s eighth adventure, Death from a Shetland Cliff, has just been released by Headline. Marsali has lived in Shetland for nearly 40 years. Find out more about Marsali and her books here: https://thecra.co.uk/find-an-author/taylor-marsali/