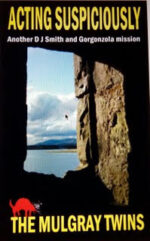 The Scrapbook by the Mulgray Twins

A spooky story for Hallowe'en – and for Burns Night too.

Nancy’s finger jabbed angrily at the smug face smiling arrogantly up at her from the page in her scrapbook. Her lips tightened in a grim line. At the top of a fresh page in neat but curiously old-fashioned handwriting she wrote the name Robert Andrew Theodore Burns and savagely underlined it with thick black pen. R. A. T. Burns was certainly living up to – or rather, down to – his initials. He was indeed a rat!

Every day that week her programme of excursions for a group of American travel agents had been spoiled by his complaints and jaundiced remarks. In neat but curiously old-fashioned handwriting beneath the heading for each excursion she listed his crimes.

The Grandeur of Scotland: awe‑inspiring lochs and mountains, dismissed by R.A.T. as mere puddles and pimples.

The Mysteries of Loch Ness: Nessie the Monster debunked as a money-making fraud.

An Evening of Scottish Fare: appetising haggis and turnips denounced as inedible, fit only for the garbage can.

As she put down her pen, a quiver of rage ran through Nancy. The future of her small, specialised company depended on the success of this hospitality tour, now so effectively being sabotaged by the complaints and jaundiced remarks of R.A.T. Burns. Tomorrow they were scheduled to visit Ayr and Alloway, Burns country. If he didn’t behave better when he saw his namesake’s birthplace, she promised herself she’d do something about it. Thoughtfully she closed the scrapbook. She would give him one last chance to mend his ways.

Next morning the Edinburgh weather perversely chose to display its worst side. Overnight a grey drizzle of mist and rain had settled over the city, pressing against windows and skylights, the proverbial wet blanket, dampening to body and spirit alike. Her party had been more inclined to huddle in the comfort of the hotel rather than face the dash over glistening pavement to the waiting coach. But at last they’d all been herded aboard, all that is, except one. Rat Burns had struck again before the excursion had even started. A hurried glance at her watch showed Nancy that they were already considerably behind schedule. No, she fumed, she was not going to give him the excuse for further complaint by leaving him behind.

‘Hold on a minute, while I see what’s keeping Mr Burns,’ she called over her shoulder, forcing a smile as she sprang down the steps of the coach. She knew exactly what was keeping Mr Burns. His non-appearance was yet another deliberate provocation. Up till now he had been eager to join every excursion with, she suspected, the prime purpose of spoiling the occasion for everybody. This time his aim would be to irritate by keeping everyone waiting. Well, he wasn’t going to get away with it.

She rang his room from the lobby. No reply. She glanced quickly round the lounge. No sign of the errant Mr Burns. She strode into the breakfast room. There he was, half-hidden behind a newspaper, sipping leisurely at a cup of black coffee.

With a great effort of will she kept her voice calm.’ Excuse me, Mr Burns, the coach is waiting. Could you please come now.’ The word now came out a bit more forcefully than she’d intended.

The newspaper rose higher in front of his face. The rustle of a turning page. Then his voice drawled lazily, ‘I’m – not – coming.’

Something inside Nancy snapped. She snatched the paper from his grasp, threw herself into a chair, and thrust her face close to his. ‘What do you mean not coming?’ she hissed, ignoring the stares from nearby tables.

R.A.T. took another leisurely sip of coffee. ‘All this folksy Scottish claptrap makes me sick to the stomach. I only came with these other travel guys because my partner couldn’t make it. That Burns fella just makes me puke! Yeah, Rabbi Burns,’ he made it sound as if he was referring to a Jewish religious leader, ‘all that stuff he wrote. I’ve rescued better from the trash can! No, I’m not coming and that’s that!’ His empty coffee cup clinked down with an air of finality.

Nancy’s green eyes flashed dangerously. R.A.T. Burns had run out of chances. She chose her words carefully. ‘Well, that’s just fine by me!’ she snapped. ‘If we’re being frank, Mr Burns, I don’t really want you to come anyway. In fact, it’s the last thing I want. Every outing this week you’ve managed to spoil the atmosphere, and I’m really delighted you’re not going to be there to spoil things this time!’

For a long moment R.A.T. Burns looked at her, considering. Then his fat cheeks creased in a mean smile. ‘In that case,’ he said, pushing back his chair, ‘I think I’ll come.’

On seeing his namesake’s birthplace, R.A.T. Burns showed no sign of mending his ways. He had bombarded her with a ceaseless barrage of questions, most of them trivial, all of them little barbed arrows of calculated irritation. But now he was silent as the group stood on the old arched bridge over the River Doon listening to her dramatic re-telling of the famous tale of Tam o’ Shanter and his grey mare Meg.

As she recited the words in her soft Scots accent there was a spontaneous burst of applause, not quite loud enough, however, to drown the sound of R.A.T.’s derisive snort.

Ignoring R.A.T., Nancy smiled appreciatively. ‘And this is the very spot where the witches caught up with Tam, and the young pretty witch Cutty Sark was left holding Meg’s tail.’

If she was rattled, Nancy didn’t show it. ‘Not at all, Mr Burns. If you read the poem you’ll see that’s just her nickname because of her very short dress.’ Before he could butt in again, Nancy added briskly, ‘And now I’ll take you to Alloway’s old haunted kirk where Tam first saw the witches dancing while the Auld Nick, the Devil played the bagpipes.’

She had timed the visit so they would arrive at dusk for maximum atmosphere. The little ruined church was silhouetted against the darkening sky. Nancy took up her stance beside an old lichened gravestone.

“The lightnings flash from pole to pole;

Near and more near the thunders roll:…

And loud resounded mirth and dancing.”

Everyone listened spellbound. Almost everyone. Nancy was conscious of R.A.T.’s mouth opening in a loud yawn which he didn’t bother to stifle. Turning her back on R.A.T., Nancy led the group through the little churchyard into the roofless church. Inside the old stone walls, dusk faded into night. In a dramatic whisper she described the awful scene witnessed by Tam as he peeped through one of the church’s tiny windows.

“Warlocks and witches in a dance,

Put life and mettle in their heels…

That shaw’d the dead in their last dresses;

And by some devilish cantraip slight

Each in its cauld hand held a light.”

Dramatically Nancy flicked a lighter into life and held up its flame at arm’s length. A gratifying gasp from her audience was followed by a hushed silence.

A dark shape detached itself from the group and the tip of a cigar poked into the flame of the lighter. ‘Well thanks,’ drawled R.A.T.  ‘All this gabbing sure makes a guy need a smoke. Now can we get going back to the hotel? I’ve got better—’

A murmur of protest drowned his words. ‘Gee, Rob, you’ve ruined the story,’ a voice called.

R.A.T. was unrepentant. ‘Witches!’ he sneered. ‘That’s kids’ stuff! There are no spooks, no witches nowadays!’

Nancy’s eyes glittered. ‘I can assure you, Mr Burns. This church is haunted. I know that for a fact.’

His tone was scornful. ‘This is the age of the computer, honey bunch, not the broomstick!’

One of the ladies in the group shivered.  ‘I’m not so sure about that, Rob. This place sure gives me the creeps!’

A lively argument broke out. Later, nobody could quite remember who it was that dared R.A.T. to be in the church alone at midnight. The idea was certainly seized on with enthusiasm by the male members of the party, eager to see R.A.T. faced with the the humiliation of backing down or suffering the misery of a long cold night in the church. Indecisively, R.A.T. shifted from one foot to the other.

Nancy quickly intervened. ‘Mr Burns, I’m sure nobody thinks you’re afraid.’ She lingered just a shade too long on that last word. ‘I must insist that you give up the idea. It will cause me a great deal of trouble if you decide to stay here. I’ll have to make all sorts of arrangements.’

That did it. R.A.T. came to a decision. ‘I’m staying.’. He smiled a thin smile. ‘On condition that each of you guys gives me fifty dollars when I prove that this place isn’t haunted. And you, sweetie pie,’ turning to Nancy, his nasty smirk even nastier, ‘promise to add to those commentaries of yours what happened when Robert Andrew Theodore Burns made an appointment to meet the witches in this phoney haunted church.’ The tip of his cigar described a fiery arc as he threw both arms wide in an expressive gesture. ‘Chance of a gathering of witches in this heap of stones? No way. Zilch. Zero.’

The black cat rubbed itself against Nancy’s leg and purred. She picked it up and, kicking off her shoes, settled herself comfortably in her favourite armchair. Sipping appreciatively at her coffee, she reached for her scrapbook and thumbed leisurely through its pages until she reached the most recent entry.

The subdued trill of the telephone broke into her thoughts. The cat stretched and leapt lightly to the floor. Nancy padded across the room to pick up the receiver.

‘Hello, Nan,’ said the voice of one of her old cronies. ‘Just to let you know the arrangements for this month’s meeting. Usual place. Nick, of course, will be playing the pipes for the dancing. Oh, by the way, we all particularly enjoyed that Special Do you arranged last week. We don’t often get the chance to practise.’ A distinct cackle echoed down the line.

Curled up again in her favourite chair, the black cat once more in her lap, Nancy resumed her perusal of the scrapbook page headed R.A.T. Burns. She smiled contentedly as she read the bold black headline of the newspaper cutting she’d pasted in.

‘Well done, Cutty Sark,’ Nancy murmured softly. Below the cutting, one long-nailed finger rested on the photo of a startled rat.

The cat licked its lips with a moist pink tongue and purred.

She drew a neat black line across the bottom of the page. Quite appropriate, really, what had happened to R.A.T. Burns.