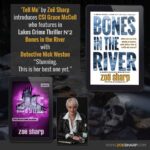 Tell Me, by Zoë Sharp

Grace ducked under the taped cordon at the edge of the crime scene and showed her ID to the uniformed constable stationed there. “CSI McColl. I’m expected.”

The officer jerked his head in the direction of the band shelter as she signed the log. “You’ll have your work cut out with this one, though,” he said.

Grace frowned and moved on. She was already dressed from head to foot in her disposable Tyvek suit and she made sure she followed the designated pathway, picking her way carefully to avoid undue contamination.

The girl was on the stone steps in front of the band shelter, no more than sixteen years old but still a child, with dirty blonde hair. As Grace approached, she could see the girl had her thin arms folded, as though hugging herself against the cold. And she must have been cold, to be out in the park in this weather in just a mini skirt and a skimpy top. Unless, of course, he’d taken her coat with him when he’d left her…

Over to the right, the rhododendron bushes grew thick and concealing. It might have been Grace’s imagination, but she thought the girl’s eyes turned constantly in their direction, as though something might still lurk amongst the glossy foliage.

She squatted down on her haunches next to the girl and waited until she seemed to have her full attention.

“Hello,” she said quietly. “I’m Grace. I’m going to be taking care of you now. Can you tell me who you are?”

There was a long pause, then: “Does it matter?”

Grace eyed her for a moment. The girl might have been pretty, if she’d taken a little time, a little care. Or if someone had taken a little care over her. Her hair was badly cut and her fingernails were bitten short and painted purple, the varnish long since chipped and peeling.

“Of course it matters.” Grace kept her tone light. “Finding out about you will help us find out who did this to you—help us to catch him. You want that, don’t you?”

“S’pose.” The girl shrugged, darting a little glance from under her ragged fringe to see if her attitude achieved the desired level of sullen cool. The action revealed the livid bruise, like spilt ink on tissue, that had formed around her left eye.

Grace tilted her head, considering. “He caught you a belter, didn’t he?” she murmured.

“Ah, don’t tell me.” Grace set down her bag and opened it. “You were always walking into doors at home, falling down the stairs.” She shook her head. “Did no one stop to wonder?”

The girl’s face darkened. “They knew, all right. They just didn’t give a—”

“No,” Grace said dryly. “I can see that.” She pulled out evidence bags and swabs, and paused. “Is that why you ran away—ended up on the streets?”

The girl’s head jerked up and she looked at Grace fully for the first time, scowling. “Who said I’m living rough?”

Grace regarded her calmly. “Your clothes are dirty enough.”

“What do you expect?” the girl snapped. She gestured angrily towards the rhododendrons. “Being dragged through the mud, having him—” She broke off, bit her lip, looked away.

“Your clothes were dirty before that,” Grace said, no censure in her quiet voice. “And you’re a pretty girl. Your nails are painted—or they were. You wouldn’t have done that if you hadn’t wanted to look nice, once upon a time.”

Reluctantly, the girl put both hands up, backs toward Grace, fingers splayed rigidly. Grace almost smiled at the defiance she read there, taking hold of one carefully in her gloved fingers, scraping out minute debris from under the receded nails.

The girl looked unaccountably pleased at this praise. It occurred to Grace that she must have received very little by way of approval in her short life. She thought of her own mother, who lavished praise and nurtured self-confidence in her only child. Ironic, then, that the pre-adolescent Grace had always been so desperate to win the approbation of her more distant father.

“Your father wasn’t around much, was he?” she said absently, noting the time and date and case number on the evidence bag as she sealed it.

The girl scowled at her again. “You’re guessing,” she accused. “No way can you tell that from looking at my hands.” Her mouth twisted into a sneer. “Read tea-leaves as well, do you?”

“No,” Grace said levelly, “but I’ve been doing this job long enough to recognise the other signs.”

The girl took her hand back and folded her arms, a challenge in her voice. “So, go on,” she goaded. “If you’re so clever, you tell me. Who am I?”

“All right.” Grace sat back on her heels, oblivious to the activity going on around her. She focused inward, closing her eyes for a moment.

Grace’s eyes opened. “Your father left when you were young. Your mother blamed you and lost herself in the bottle—pills or booze, or possibly both.”

The girl rolled her eyes, gave a derisive laugh. “Oh, big deal. You could be talking about half the kids ’round here.” She jerked her head toward the nearby flats. “Not good enough.”

“OK,” Grace conceded. “Then you’re going to tell me it’s also obvious that your mother brought home a procession of one-night stands to pay the rent. How old were you when the first of them asked if you were for sale, too?”

The girl wouldn’t meet her eyes. “None of your business,” she muttered.

“Mm, I thought so.” Grace paused again but the girl wouldn’t respond. “But you didn’t leave then, did you? You clung in there. For a while. Until it got too much, and you attempted self-harm.”

Grace nodded toward the old scars on the girl’s wrists. “You cut yourself,” she said, picking her words with care. “Not a serious attempt, I don’t think. A cry for help. But nobody answered, did they?”

The girl twisted the cheap ring round on her finger and didn’t speak, staring across the grass to where the row of uniforms swept the parkland.

“He listened,” she said at last, so quietly Grace hardly caught the words.

The girl’s head jerked up at the tone in her voice, eyes flashing. “Don’t say it like that,” she snapped, harsh. “You don’t know how it was. He loved me!”

“I’m sure he told you he did,” Grace said, bland. “Gave you that ring, didn’t he? Told you that you were his girl now. Just like all the others.”

“So how long was it before he told you about the man he owed money to? About how it would all be all right if only you’d just have sex with this man. Did you refuse? Is that why he hit you?”

“I made him angry. He was sorry—after.”

“I wanted to help him. He didn’t force me or nothing.”

“Not that first time, no,” Grace said. “But that was just the beginning, wasn’t it? When did you realise he wasn’t your boyfriend any more, but your pimp? Or did you ever realise it?”

“If I’d had someone looking out for me,” the girl said, her voice bitter now, “do you think something like this would’ve happened?”

“It might have done. If it was him—your boyfriend—who did this to you.”

“No,” Grace said evenly. “It would just give us a better place to start looking.”

“Yeah, right,” the girl snorted, still surly. “You’re thinking it, though. I can tell.”

“I try to keep an open mind, but you’re not making it easy for me. You shouldn’t have been here at that time of night, you see. It’s where the working girls come with the men they pick up when the clubs turn out. And you could have just been trying to make the money for your next fix.”

The girl opened her mouth, saw Grace’s gaze on the evidence of her addiction that tattooed the crook of both arms, and shut her mouth again with a glower.

“You see too much,” was all she said.

“It’s my job,” Grace agreed. “Just as it’s my job to find out who you are, and who did this to you. To stand for you, when no one else would.”

The girl looked at her with doubt. Grace thought she sensed speculation that had not been there previously. “And you’ll do that, will you?”

The girl sighed. “You’ll be the first, if you do.”

“Well, better late than never, then.”

The girl was silent again. The sky had darkened overhead and she looked up into the gathering clouds. “It’s going to rain.”

“I know,” Grace said. She stood. “I’d better get back to work. The rain will destroy the evidence if we don’t protect the scene quickly.”

“Of course,” Grace said. “They’ll take you in, but you’ll certainly see me again. I’ll need more from you, if we’re to catch him.”

“That’s good,” the girl said and gave a small smile, rusty from lack of use.

“How are you getting on, Grace?” asked a brisk voice from behind her. Grace turned to see one of the detective constables who’d just arrived on scene. She bent and snapped her bag closed, then straightened.

“Will you get anything useful from her, do you think?”

The girl lay on the damp steps, arms wrapped across her body, in the position they’d first found her. Her eyes were open and glassy, her lips tinged with blue. The marks of the stranglehold that had killed her showed dark and ugly around her throat.

“I think so,” Grace murmured. “The dead always talk to me in the end.”